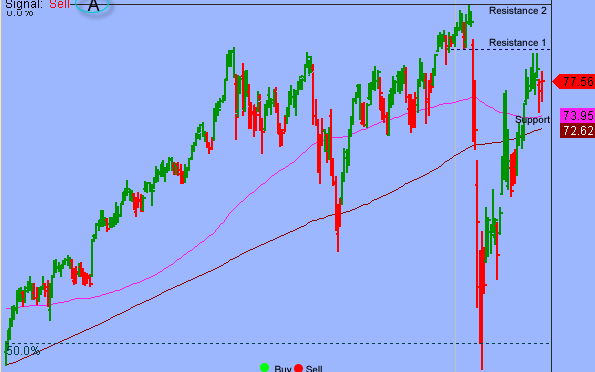 We’ve noted in the previous Market Outlook that: “the big picture remains the same.  There’s an orderly high-level consolidation period near the trend channel moving average, around S&P’s 3350, which represented the digestion period in the aftermath of the late September rally.  Market internal has been strengthened following recent advance but upside momentum does not appeared strong enough to generate widespread breakout.”  As anticipated, stocks closed lower but off intraday low after U.S. President Donald Trump’s coronavirus diagnosis fueled concerns about the election and a worsening pandemic. The S&P slid 1 percent to 3,248.44 after falling as much as 1.7 percent earlier. The Dow Jones Industrial Average fell 0.5 percent to 27,682.81. The Nasdaq Composite declined 2.2 percent to 11,075.02.  The CBOE Volatility Index (VIX), widely considered the best gauge of fear in the market, rose more than 3 percent to 27.63.

Airlines climbed after House Speaker Nancy Pelosi touted further aid for the industry, lifting industrials higher, with Delta Air Lines (DAL) and United Airlines (UAL), and American Airlines (AAL) climbed, with the latter more than 2 percent.  As such, the Industrial Select Sector SPDR ETF (XLI) rose more than 1 percent on the day but is down about 5 percent YTD, underperformed the S&P.  Now the question is what’s next?  Below is an update look at a trade in XLI. 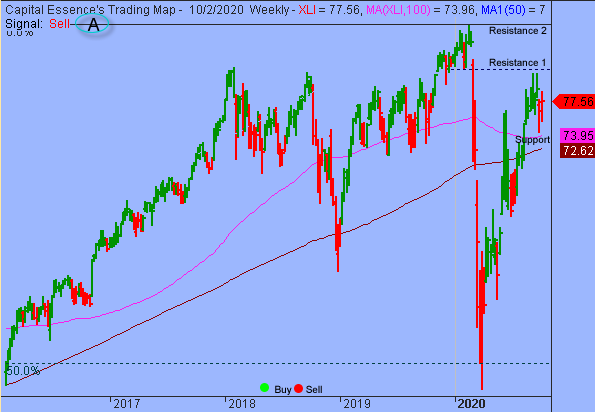 Our “U.S. Market Trading Map” painted XLI bars in red (sell) – see area ‘A’ in the chart.  Over the past few weeks, XLI has been trending lower in a short-term corrective mode after the epic rally off the March low ran into resistance at the early 2020 breakdown point.  The correction tested support at the 2-year moving average, a key technical level based on moving averages.  Last week’s rebound suggested that the support would hold.  Nonetheless, the overall technical remains negative, suggesting that the path with least resistance remains lower.  These elements increased the probability for further range bound trading pattern. On the upside, XLI has 80 to trade against.  A close above that level on a weekly closing basis will bring the February high, just above 85, into view.

As for support, there is a strong band of support near 74.  A failure to hold above that level will increase the probability for a full retracement of the March-September upswing.  Short-term traders could use that level as the logical level to measure risk against. 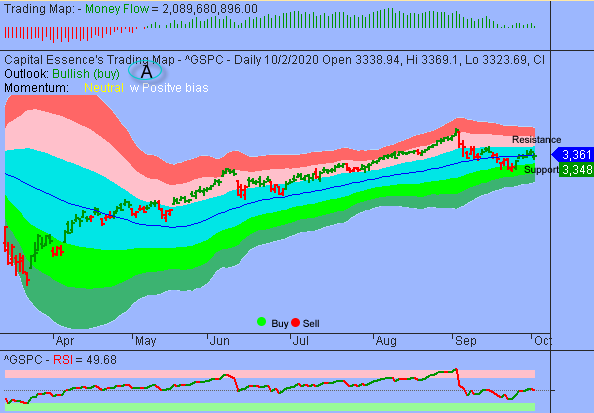 Once again, the S&P fell below the trend channel moving average after last week’s rally attempt ran out of steam near the mid-September breakdown point.  Momentum indicator shifted lower from below the overbought zone, suggesting further short-term weakness likely.  Money Flow measure is on a verge of falling below the zero line, indicating a lack of commitment among the bulls. Over the next few days, traders should monitor the retreat and rebound behaviors as the 3300 zone is tested as support.  A failure to hold above that level signify a bearish breakdown and a much deeper pullback should be expected.

On the upside, S&P has 3400 to trade against. There is no reason to turn particularly bullish until this zone is eclipsed.

In summary, S&P’s quick run is showing some signs of exhaustion.  Market internals deteriorated as the index struggled to get pass the 3400 zone.  The index could signal a downward trajectory, depending on how it closes over the next few days.  S&P has support near 3300.  If it closes below that level, the next leg is likely lower, and we’re looking at 3230.