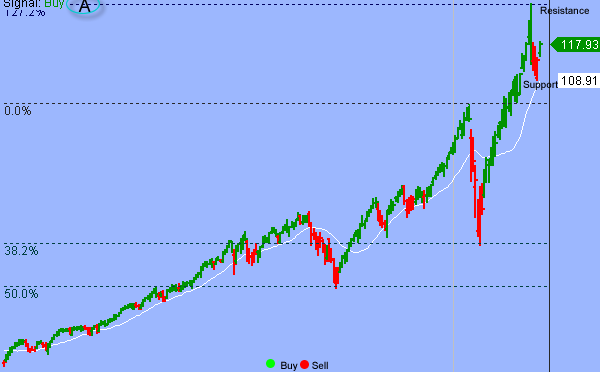 Stocks closed higher but off session highs Thursday amid rising fears U.S. lawmakers are unlikely to break the impasse on talks for further federal stimulus, though losses were stemmed by an ongoing rise in tech.  The Dow Jones Industrial Average added 0.1 percent to 27,816.90. The S&P rose 0.5 percent to 3,380.80, while the Nasdaq Composite outperformed, gaining 1.4 percent to 11,326.51.  The CBOE Volatility Index (VIX), widely considered the best gauge of fear in the market, rose more than 1 percent to 26.67.

Tech pushed the broader market higher. Apple (AAPL) and Microsoft (MSFT) Alphabet (GOOGL) Amazon.com (AMZN) and Facebook (FB), which together make up a quarter weighting of the S&P, closed higher.  As such, the Technology Select Sector SPDR ETF (XLK) rose more than 1 percent on the day and is up more than 28 percent YTD, outperformed the S&P by a wide margin.  Now the question is what’s next?  Below is an update look at a trade in XLK. 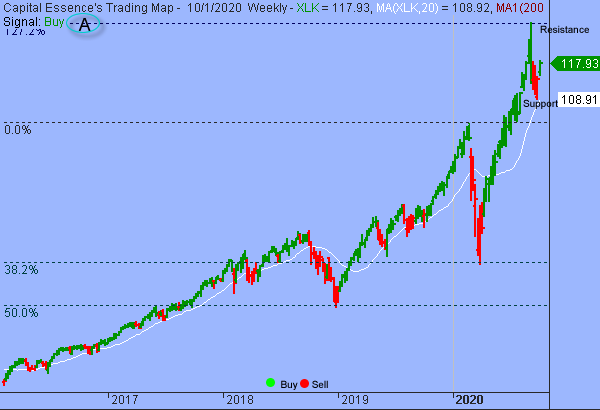 Our “U.S. Market Trading Map” painted XLK bars in green (buy) – see area ‘A’ in the chart.  Over the past few weeks, XLK has been trending lower in a short-term corrective mode after the epic rally off the March ran into resistance at the 127.2% Fibonacci retracement.  The early September correction found support near the 109 zone.  This week’s bullish breakout above the September’s falling trend line, signify a bullish breakout and upside reversal.  This is a positive development, opened up for a retest of the September high, just below 130.

XLK has support near 109.  Short-term traders could use that level as the logical level to measure risk against. 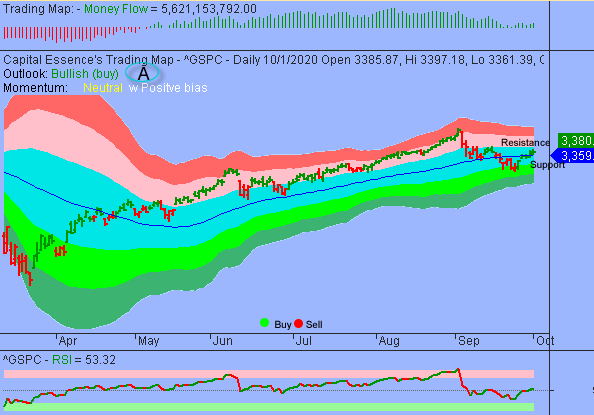 The big picture remains the same.  S&P continues basing sideways using the trend channel moving average as support.  Market internal has been strengthened following recent advance but upside momentum does not appeared strong enough to generate widespread breakout.  Over the next few days, traders should monitor trading behavior as the 3400 zone is tested as resistance.  That level was significant when the index fell below it in mid-September.  A sustain advance above that level will bring the early September high into view.

As for support, there is a strong band of support near the 3350 zone.  A failure to hold above that level will invalidate the bullish signal and a much deeper pullback should be expected.

In summary, the big picture remains the same.  There’s an orderly high-level consolidation period near the trend channel moving average, around S&P’s 3350, which represented the digestion period in the aftermath of the late September rally.  Market internal has been strengthened following recent advance but upside momentum does not appeared strong enough to generate widespread breakout.  S&P has 3400 to trade against.  We’d turn particularly bullish if the index closes twice above that level.