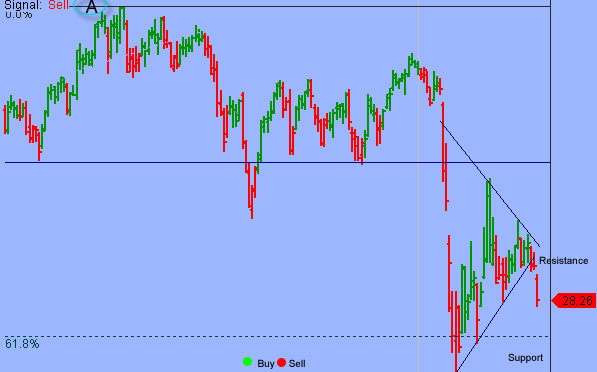 We’ve noted in the previous Market Outlook that: “S&P tested and failed at the trend channel moving average, the level that offered support since the index climbed above it in late April.  When key supports broke it means that long-term buying pressure has finally been exhausted.  The stronger the resistance level, the more powerful the selloff.  Nevertheless, support is strong near the 3200 zone.  This could help minimize downside follow-through and widespread breakdowns.”  As anticipated, S&P traded lower in early Thursday session, traded as low as 3209 before buyers stepped in and pushed prices off the intraday low.  For the day, the bench mark gauge climbed 0.3 percent to 3,246.59 and the Nasdaq Composite advanced 0.4 percent to 10,672.27.  The Dow Jones Industrial Average added 0.2 percent to 26,815.44.  The CBOE Volatility Index (VIX), widely considered the best gauge of fear in the market, fell less than 1 percent to 28.51.

Investor sentiment on stocks was also boosted by signs U.S. lawmakers are still seeking to get a deal done on further stimulus before the election.  Treasury Secretary Steven Mnuchin reportedly plans to resume talks with House Speaker Nancy Pelosi to iron out differences on a fresh round of stimulus to boost the economy.  Sectors tied to the progress of the economy such as industrials and financials also found their footing.  Financials were pushed higher by a 5% jump in Goldman Sachs Group Inc. (GS) after UBS upgraded its rating on the stock to buy from neutral, citing opportunity ahead for higher trading revenue. UBS suggested a closely fought U.S. presidential election could trigger volatility, boosting Goldman’s trading revenue.  As such, the SPDR S&P Bank ETF (KBE) rose 0.18 percent on the day but is down more than 40 percent YTD, underperformed the S&P.  Now the question is what’s next?  Below is an update look at a trade in KBE. 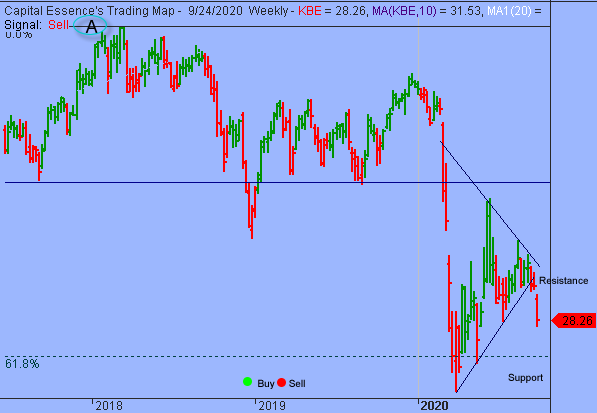 Our “U.S. Market Trading Map” painted KBE bars in red (sell) – see area ‘A’ in the chart.  After the epic fall earlier this year met highly anticipated support near the 61.8% Fibonacci retracement, KBE put itself into a coil or triangle pattern as it digested the oversold conditions.  This week’s selloff pushed the ETF below the March rising trend line, suggesting that the 6-month triangle pattern has resolved itself into a new downswing and a retest of the 25-22 zone, or the March-April low should be expected. 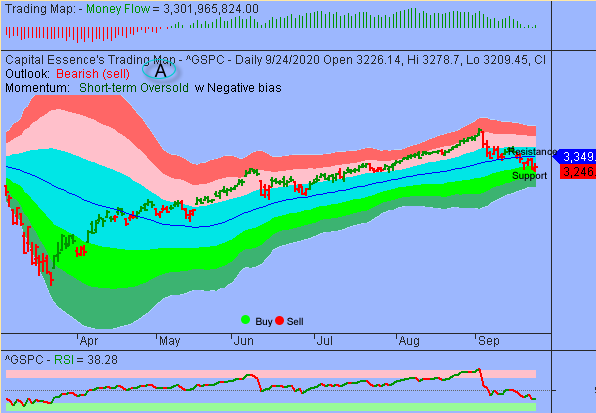 As expected, the S&P moved down to test support at the 3200 zone after falling below the trend channel moving average last week.  The late day rally suggested that the support would hold, at least for the time being.  Market internal however, has been deteriorated following recent selloff.  If the market is going to find bottom in the near term, we want to see the S&P stabilizes and climbs above the trend channel moving average, around 3350.  Staying below that level heralds more losses.

For now, 3200 is the line in the sand.  A failure to hold above it, will bring the bottom of its short-term trading range, around 3100, into view.

In summary, S&P tested and held support at the 3200 zone.  However, Thursday’s rally has proved nothing as far as its staying power or as a possible trend reversal.  If the market is going to find bottom in the near term, we want to see the S&P stabilizes and climbs above 3350.  There is a no reason to turn particularly bullish until this area is eclipsed.