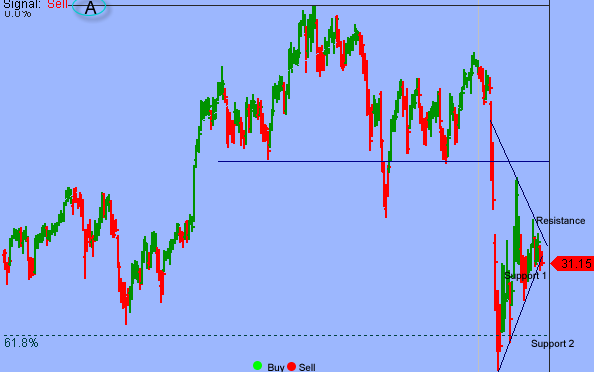 We’ve noted in the previous Market Outlook that: “Monday’s bullish reversal signal suggested that an important near-term low has been established and the S&P is in an early stage of an oversold rally.”  As anticipated, S&P closed higher but off intraday high, up 0.5 percent to 3,401.20, as financials fell and Apple (AAPL) cut its gains after unveiling its services bundle and new hardware.   Apple unveiled Tuesday its new hardware including new iPads and Apple Watches and the highly anticipated services bundle, Apple One.  The Dow Jones Industrial Average closed just above the flatline at 27,995.60 and the Nasdaq Composite advanced 1.2 percent to 11,190.32.  The CBOE Volatility Index (VIX), widely considered the best gauge of fear in the market, fell about 1 percent to 25.57.

Financials fell about 1%, led by a fall in Wall Street banks ahead of the Fed’s two-day meeting. The Fed on Wednesday is expected to keep rates unchanged, and will likely reiterate its support to keep rates lower for longer.  JPMorgan Chase & Co (JPM) fell 2 percent after lowering guidance on net interest income in the wake of falling interest rates.  As such, the SPDR S&P Bank ETF (KBE) fell 1.77 percent on the day and is down more than 34 percent YTD, underperformed the S&P.  Now the question is what’s next?  Below is an update look at a trade in KBE. Our “U.S. Market Trading Map” painted KBE bars in red (sell) – see area ‘A’ in the chart.  The first dominant feature on the chart is the falling trend line starting in early 2020.  The second dominant feature of the chart is the triangle formation since late March, which represents digestion period.  Last week’s selloff pushed the ETF slightly below the March rising trend line, suggesting that the 6-month triangle pattern might have resolved itself into a new downswing.  Right now follow-through is the key, a close below the 30 on a weekly closing basic will confirm the bearish signal and a retest of the March low, around 22.50, should be expected.

KBE has resistance near 35.  Short-term traders could use that level as the logical level to measure risk against. As expected, the S&P moved up to test resistance at the lower boundary of the pink band after recent pullback found support at the trend channel moving average.  Momentum indicator trended higher from near oversold zone but upside momentum does not appeared strong enough to generate widespread breakouts.  Additionally, given the overhead resistance near the 3430 zone, there is no reason to turn particularly bullish until this zone is eclipsed.

In summary, while the near-term technical backdrop remains bullish, trading behavior in the S&P remains constrained by a short-term sideways pattern and shown little evidence of a sustainable change in trend.  3430 is the line in the sand. The bulls must hurdle and sustain above that level or market will works off oversold conditions and fall under its own weight.