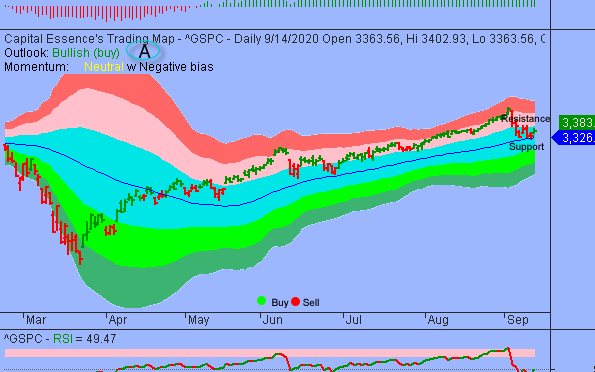 We’ve noted in the previous Market Outlook that: “it seems to us that S&P found some solid footing near the trend channel moving average.”  As anticipated, S&P closed higher Monday, climbed 1.3 percent to 3,383.54, as deal-making activity and positive vaccine news prompted bullish bets on stocks.  Oracle Corporation (ORCL) jumped 4% as the company appears to be at the front of the queue to partner with ByteDance’s TikTok business in the U.S. ByteDance reportedly said it prefers to partner, rather than sell, TikTok’s U.S. business, rejecting an offer from Microsoft Corporation.  The Dow Jones Industrial Average gained 1.2 percent to 27,993.33 and the Nasdaq Composite jumped 1.9 percent to 11,056.65.  The CBOE Volatility Index (VIX), widely considered the best gauge of fear in the market, fell nearly 5 percent to 25.58.

Investor sentiment was also supported by positive vaccine news after AstraZeneca PLC (AZN) resumed its Covid-19 vaccine trial in the U.K. Trials in the South Africa, Brazil and the U.S. remain on pause. Trials of the vaccine candidate are expected to resume midweek in the U.S.  Vaxart (VXRT) jumped 47 percent after receiving clearance from the U.S. Food and Drug Administration to start human trials of its Covid-19 vaccine candidate.  As such, the iShares Nasdaq Biotechnology ETF (IBB) jumped more than 5 percent on the day and is up nearly 12 percent YTD, outperformed the S&P.  Now the question is what’s next?  Below is an update look at a trade in IBB.

Our “U.S. Market Trading Map” painted IBB bars in green (buy) – see area ‘A’ in the chart.  Over the past few weeks, IBB has been trending lower in a short-term corrective mode as it works off overbought conditions.  The late July correction tested support at the one-year moving average.  This week’s reversal suggested that the support would hold.  This is a positive development, opened up for a retest of the July high, just above 146.  That level is significant in charting terms.  A sustain advance above it would trigger acceleration toward the 127.2% Fibonacci extension, around 164.

IBB has support near 126.  Short-term traders could use that level as the logical level to measure risk against. 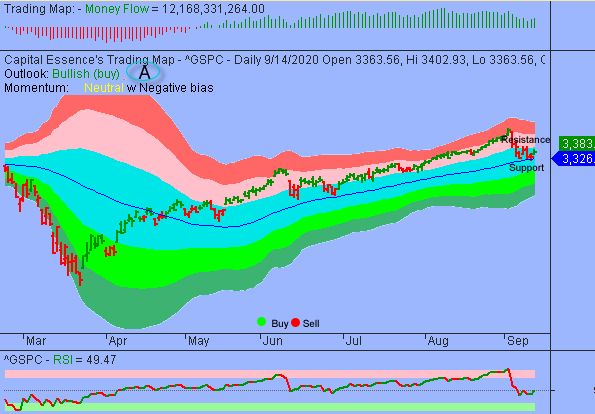 As expected, the S&P rebounded nicely off support at the trend channel moving average.  Momentum indicator trended higher from near oversold zone, allowing additional upside probing.  This is a positive development, signify an upside breakout and bullish reversal.  Right now, follow-through is the key.  A close above the lower boundary of the pink band, around 3430, will confirm Monday’s bullish signal and trigger acceleration toward the September high, just below 3600.

In summary, Monday’s bullish reversal signal suggested that an important near-term low has been established and the S&P is in an early stage of an oversold rally.  However, given the looming resistance near 3430, there is no reason to turn particular bullish until this zone is eclipsed.  It will be important to monitor the breakout and retreat behaviors over the next few days to determine whether breakouts are decisive.