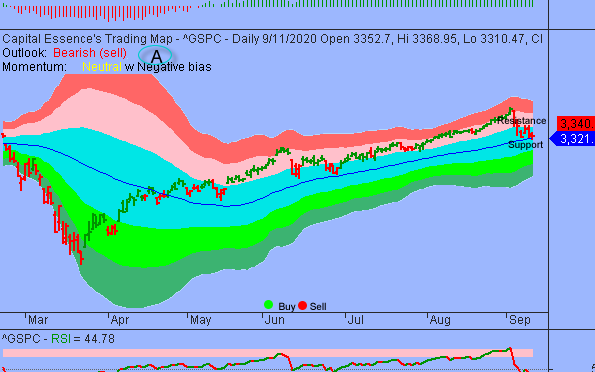 We’ve noted in the previous Market Outlook that: “S&P will have a downward bias this week, pressured by short-term negative momentum but we expect support at the trend channel moving average to remain largely intact.  There is a high probability that market is in for a ‘range-bound’ trading environment.  This is a rally and retreat environment. It is not a trending environment. Short-term traders can anticipate continued volatility with rapid up and down moves in the markets.”  As anticipated, S&P closed higher in another volatile session on Friday, added 0.1 percent to 3,340.97, as the continuing tech sell-off drove the benchmark to its worst week in months.  The Dow Jones Industrial Average rose 0.5 percent to 27,665.64.  The NASDAQ closed 0.6 percent lower at 10,853.55.  At its session low, it was down more than 1.7 percent after Bloomberg News reported, citing sources, that SoftBank was considering changes to its options trading strategy. Last week, SoftBank was identified as the “Nasdaq whale” that bought billions in stock options in a bet for higher prices in Big Tech.  The CBOE Volatility Index (VIX), widely considered the best gauge of fear in the market, fell nearly 10 percent to 26.87.

With tech taking a breather, investors appeared to turn to cyclical stocks, which tend to outperform in a growing economy.  As such, the Industrial Select Sector SPDR ETF (XLI) rose 1.36 percent on the day but is down about 5 percent YTD, underperformed the S&P.  Now the question is what’s next?  Below is an update look at a trade in XLI. 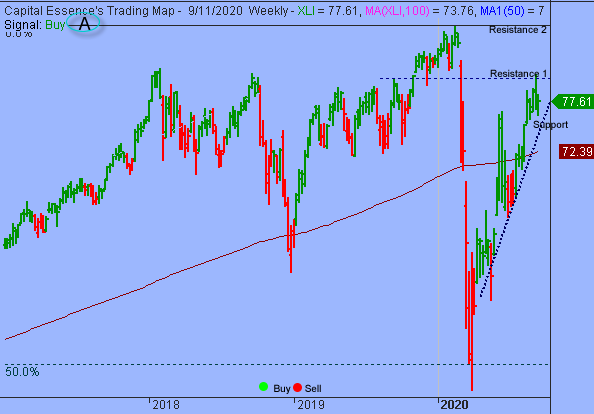 Our “U.S. Market Trading Map” painted XLI bars in red (sell) – see area ‘A’ in the chart.  Over the past few weeks, XLI has been basing sideways after the early July rally ran into resistance at the late February breakdown point.  Technically speaking, the fact that XLI basing sideways as it works off overbought conditions indicating an internal strength, suggesting that the ETF might take a leg higher as soon as it shake off excessive optimism.  Resistance is around 80.  A close above that level on a weekly closing basis will trigger acceleration toward the February high, just above 85.

XLI has support just below 75.  Short-term traders could use that level as the logical level to measure risk against. 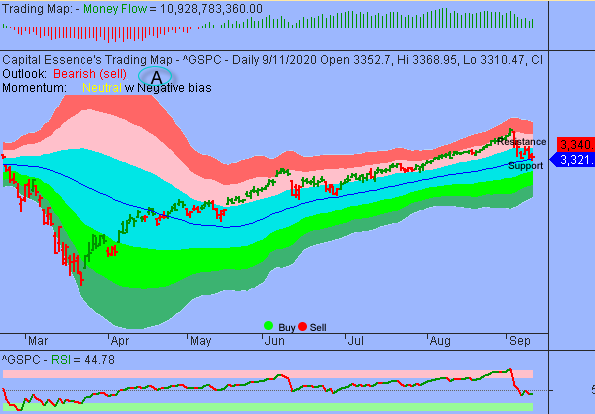 Once again, S&P bounced off support at the trend channel moving average after the early rally attempt was met with a new wave of selling interest.  Momentum indicator trended higher from near oversold zone but upside momentum does not appeared strong enough to generate a widespread breakdown.  The index could signal a downward trajectory, depending on how it closes over the next few days.  The lower boundary of the pink band, around 3430, represents key resistance.  That level was significant when the index felt through it last week.  The bulls must hurdle and sustain above that level or market will works off oversold conditions and fall under its own weigh.

In summary, it seems to us that S&P found some solid footing near the trend channel moving average.  However, the fact that the index is basing sideways as it worked off the short-term oversold condition rather than bouncing higher, indicating an internal weakness.  The bulls must hurdle and sustain above 3430 quickly or the market will work off oversold conditions and fall under its own weight.