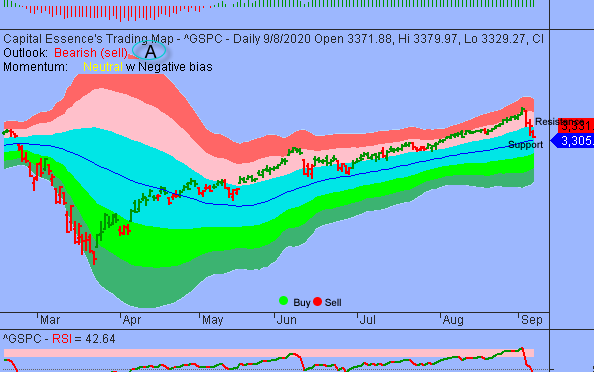 We’ve noted in the previous Market Outlook that: “near-term technical outlook however, remains negative, suggested that the late day rally could have been short-covering rather than real buying interest.”  As anticipated, stocks tumbled out of gate Tuesday as technology shares were under pressure once again following their worst sell-off in more than five months last week after news that SoftBank made significant option purchases during the run-up in U.S. stocks.  The Nasdaq Composite dropped 4.1 percent to 10,847.69.  The Dow Jones Industrial Average plunged 2.3 percent to 27,500.89. The S&P slid 2.8 percent to 3,331.84.  The CBOE Volatility Index (VIX), widely considered the best gauge of fear in the market, gained more than 2 percent to 31.43.

Chip stocks also got hit hard Tuesday following report that the Trump administration is looking at adding Chinese chip giant, SMIC, to the Commerce Department’s “Entity List,” which would bar it from doing business with U.S. firms.  Nvidia and Micron fell 5.6 percent and 3.2 percent, respectively. Applied Materials dropped 8.7 percent. Advanced Micro Devices pulled back by 4 percent.  As such, the iShares PHLX Semiconductor ETF (SOXX) tumbled 4.67 percent on the day but is up more than 14 percent YTD, outperformed the S&P.  Now the question is what’s next?  Below is an update look at a trade in SOXX.

Our “U.S. Market Trading Map” painted SOXX bars in red (sell) – see area ‘A’ in the chart. Since bottoming in late March, the massive spring rally took SOXX well above the prior high set in February. The rally tested and found some resistance near the 127.2% Fibonacci extension.  This week’s downside follow-through pushed the ETF below the 2020 rising trend line, signify a bearish breakout and downside reversal.  A close below 291 on a weekly closing basis will confirm this and a retest of the early July breakout point, around 270, should be expected.

SOXX has resistance near 300.  Short-term traders could use that level as the logical level to measure risk against. 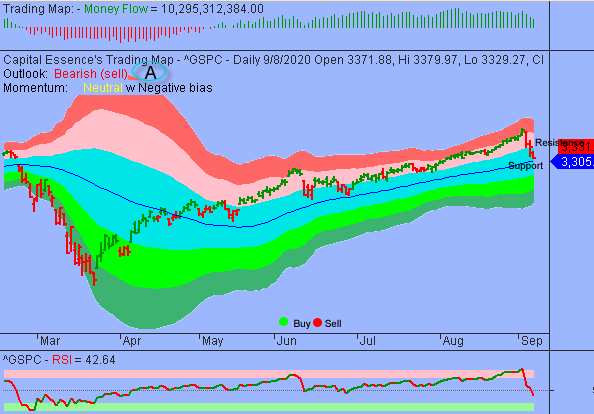 Once again, S&P moved down to test support at the trend channel moving average after last Friday’s recovery rally was met with a new wave of selling interest.  Momentum is not supportive over the short to medium term but the indicator is much closer to oversold than overbought.  This could help putting a short-term floor under the market. So it should not be surprising to see the index regroup and rebound from near 3300.  Perhaps the positive Money Flow measure is the best illustration of the bull’s case.