Equity market closed lower but off intraday lows Friday amid concerns about the pace of the economic recovery amid a mixed jobs report.  The U.S. unemployment rate fell to 8.4% last month from 10.2% in July, according to the Labor Department.  As for overall jobs creation, employment in the U.S. grew by 1.37 million in August, topping an estimate of 1.32 million.  The Dow Jones Industrial Average fell 0.6 percent to 28,133.31. At one point, the 30-stock average fell as much as 628.05 points, or 2.2 percent. The S&P slid 0.8 percent to 3,426.96. The broader-market index was down 3.1% at its session low and briefly traded positive on the day. The Nasdaq Composite fell 1.3 percent to 11,313.13.  The CBOE Volatility Index (VIX), widely considered the best gauge of fear in the market, fell more than 8 percent to 30.75.

Financials, which lagged the recent market rally, led Friday recovery rally with JPMorgan (JPM), Citigroup (C) and Goldman Sachs (GS) trading in the green.  As such, the Financial Select Sector SPDR ETF (XLF) rose 0.76 percent on the day but is down nearly 18 percent YTD, underperformed the S&P.  Now the question is what’s next?  Below is an update look at a trade in XLF. 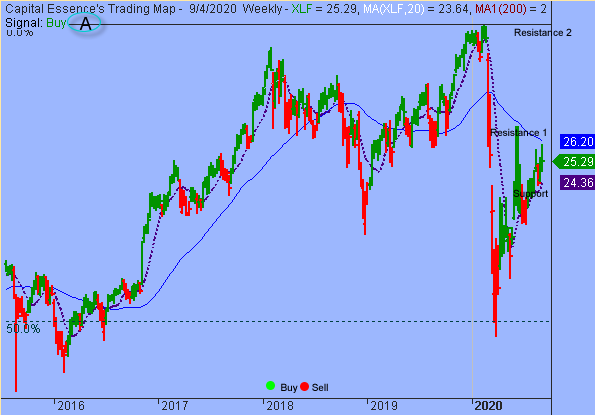 Our “U.S. Market Trading Map” painted XLF bars in green (buy) – see area ‘A’ in the chart. Since bottoming in late March, XLF has slowly been carving out a large triangle pattern as traders wondered whether more gain is warranted given the massive rally over the past months.  According to our “U.S. Market Trading Map”, there could be more gains ahead for the ETF. Resistance is around 26.20.  A close above that level on a weekly closing basis signify a bullish breakout, suggesting that the 5-month triangle pattern has resolved itself into a new swing that projects to 31, or the February high. 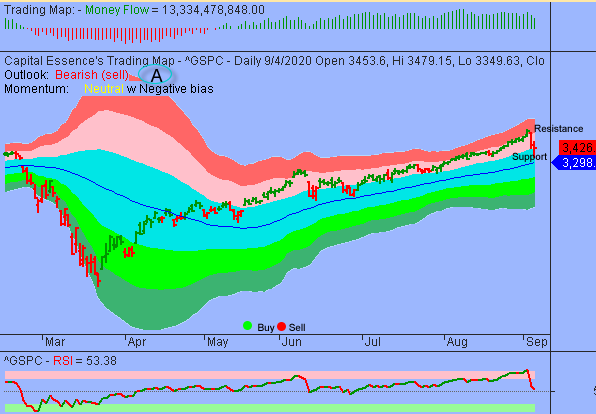 S&P moved down to test support at the trend channel moving average after recent test of the resistance at the lower boundary of the red band was met with a new wave of selling interest.  In accordance to the Japanese candlestick pattern recognition, Friday’s bullish long tail is a clear indication of demand overwhelming supply.  With that said, if history is any guidance then traders should expect at least an attempt to rally toward recent breakdown point near 3480. Perhaps the positive Money Flow measure is the best illustration of the bull’s case.  Nonetheless, the near-term technical outlooks remains bearish so it should not be surprising to see the index correcting lower from that level.

As for support, the trend channel moving average, around 3300, represents a major price support.  A failure to hold above that level would indicate that momentum is likely shifting and a retest of the bottom of its short-term trading range, around 3100, could follow shortly.

In summary, Friday’s bullish long tail candlestick indicated that an important near-term low has been established and the S&P is setting up for a short-term relief rally that projects to 3480-3500.  The near-term technical outlook however, remains negative, suggested that the late day rally could have been short-covering rather than real buying interest.  So it should not be surprising to see the index correcting lower from that level.