Stocks fell sharply on Thursday, as a jolt of volatility swept through Wall Street amid a plunge in big tech stocks and mixed economic data.  The Dow Jones Industrial Average fell 2.86 percent, the S&P was down 3.61 percent, while the Nasdaq Composite slumped nearly 5 percent.  The CBOE Volatility Index (VIX), widely considered the best gauge of fear in the market, soared nearly 25 percent to 33.16.

Tech stocks, which have led the recent market rally, demonstrated their hold over the market once again as a slide in mega-cap tech stalwarts prompted investors to cut their bullish bets on stocks. Apple (AAPL) fell nearly 7 percent to lead the move lower in the Fab 5 stocks, with Microsoft (MSFT), Amazon.com (AMZN), Facebook (FB) and Alphabet (GOOGL) each down more than 4 percent.  As such, the Technology Select Sector SPDR ETF (XLK) tumbled 5.7 percent on the day and is up more than 30 percent YTD, outperformed the S&P.  Now the question is what’s next?  Below is an update look at a trade in XLK. 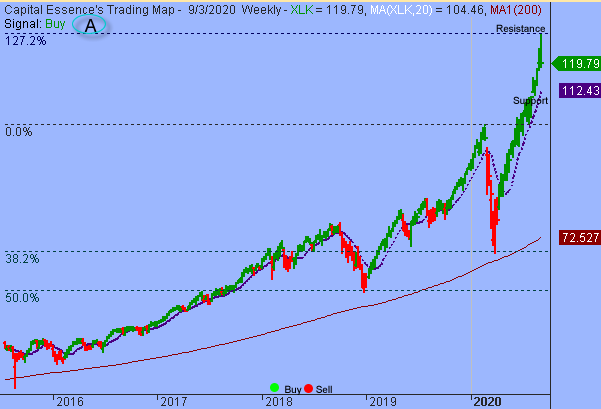 Our “U.S. Market Trading Map” painted XLK bars in green (buy) – see area ‘A’ in the chart. After dropping about 30 percent from its February high, near 103, and met the anticipated support at the 38.2% Fibonacci retracement of the 2009-2020 major upswing, XLK has retraced all of the prior lost and some more.  The late March rally pushed the ETF up against the 127.2% Fibonacci extension, around 128.  This week’s massive selloff suggested that the resistance would hold, at least for the time being.  The overall technical backdrop, however, remains positive so expect XLK to attract buyers in any pullback toward the 113 zone.

XLK has support near 113.  Short-term traders could use that level as the logical level to measure risk against. 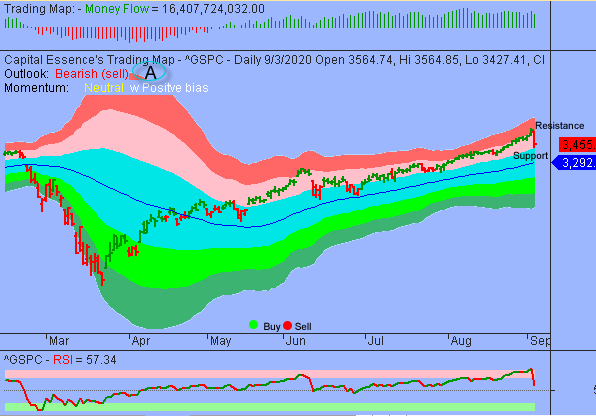 Key technical development in Thursday session was a clear break below the lower boundary of the red band, or extreme overbought zone.  That level was tested several times over the past months.  As mentioned, the normal behavior for the S&P has been to consolidate and retreated almost every time it traded above that level, the way we had in June, so there is a high probability that a significant consolidation pattern will again develop in the coming days.

Thursday’s selloff tested support at the lower boundary of the pink band, just above 3400.  Not only that it is an important support, the overall technical backdrop remains positive so we believe that any dips are a buying opportunities rather than time to take profits and get out.

In summary, an overbought pullback consolidation interrupted the multi-month rally in the S&P.  Although seemingly vulnerable to further short-term weakness, the overall technical backdrop remains positive so expect S&P to attract buyers in any pullback toward the 3400 zone.