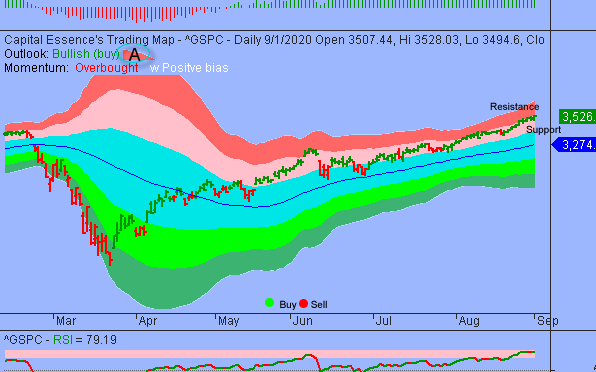 We’ve noted in the previous Market Outlook that: “an overbought pullback consolidation interrupted the late August rally in the S&P.  Although seemingly vulnerable to further short-term weakness, the overall technical backdrop remains positive so sell-off could be shallow because the sideline money will try to fight its way back into the market.”  As anticipated, S&P closed higher Tuesday, up 0.8 percent to 3,526.65, after the early selloff attempt was met with a new wave of buying interest.  The Dow Jones Industrial Average gained 0.8 percent to 28,645.66.  The Nasdaq Composite advanced 1.4 percent to 11,939.67.  The CBOE Volatility Index (VIX), widely considered the best gauge of fear in the market, fell about 1 percent to 26.14.

Walmart (WMT) was up more than 7 percent after the retailer announced it would launch its own membership program Walmart+, a direct competitor to Amazon’s Prime service, later this month.  As such, the SPDR S&P Retail ETF (XRT) jumped 2.28 percent on the day and is up more than 15 percent YTD, outperformed the S&P.  Now the question is what’s next?  Below is an update look at a trade in XRT. 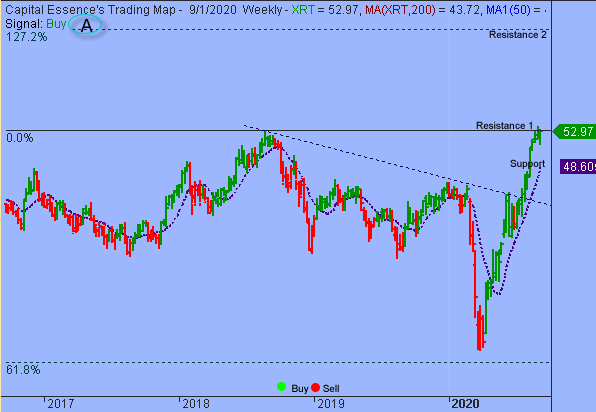 Our “U.S. Market Trading Map” painted XRT bars in green (buy) – see area ‘A’ in the chart. XRT has been on a tear in recent days after breaking out above the 2018 falling trend line in mid-July.  The rally pushed the ETF up against the prior high set in late August 2018.  The overall technical backdrop remains positive, suggesting that XRT will take a new leg higher as soon as it woks off excessive optimism.   Resistance is around 53.  A close above that level on a weekly closing basis will confirm this and trigger acceleration toward the 65 zone, or the 127.2% Fibonacci extension.

XRT has support near 49.  Short-term traders could use that level as the logical level to measure risk against. 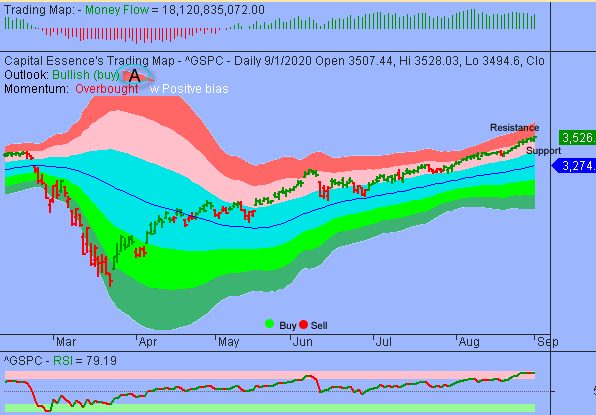 Once again, S&P rebounded nicely after recent pullback found support near the important sentiment 3500 mark.  This is a positive development but let’s notice that with Tuesday’s gains, the index is up against the lower boundary of the red band.  As mentioned, the normal behavior for the S&P has been to consolidate and retreated almost every time it traded above that level, the way we had in June, so there is a high probability that a significant consolidation pattern will again develop in the coming days.

In summary, while overbought condition is likely keeping buyers at bay, the overall technical backdrop remains supportive of further advance.  As for strategy, pullback will present a buying opportunity, while selling into strength may not be the best strategy in a market considered likely to bounce back.