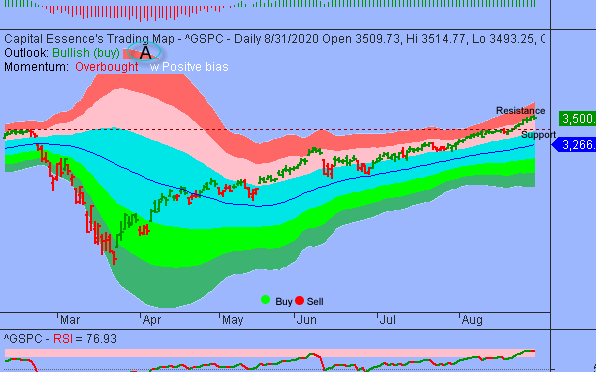 We’ve noted in the previous Market Outlook that: “the fact that market is overbought as S&P poked its head into the level that had been successful in repelling price action in the past suggesting that the market is likely to pare back and consolidate before heading higher again.  So, we would look to increase upside exposure on market dips rather than chasing breakouts.”  As anticipated, S&P ended Monday lower as investors looked warily at U.S. and overseas COVID-19 numbers. Also contributed to the overall weakness were declines in bank stocks.  JPMorgan Chase, Citigroup, Bank of America and Wells Fargo were all down more than 2 percent, following Treasury yields lower. Yields fell after Federal Reserve Vice Chairman Richard Clarida said rates won’t go up just because unemployment goes down.

Energy stocks led the move lower in the Dow as oil prices struggled in the wake of data showing U.S. crude production rose 4.2 percent to 10.436 million barrels per day in June, renewing oversupply concerns.  As such, the Energy Select Sector SPDR ETF (XLE) tumbled 2.17 percent on the day and is down more than 40 percent YTD, underperformed the S&P.  Now the question is what’s next?  Below is an update look at a trade in XLE. 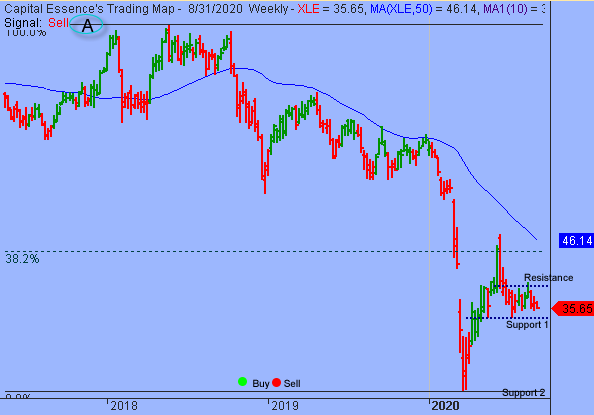 Our “U.S. Market Trading Map” painted XLE bars in red (sell) – see area ‘A’ in the chart. Over the past few weeks, XLE has been basing sideways using the early May breakout point as support after the March recovery rally ran out of steam near the 38.2% Fibonacci retracement. The overall technical backdrop remains negative, suggesting that the ETF might take a leg lower as soon as it works off oversold conditions.  Support is around 35.  A close below that level on a weekly closing basis will confirm this and a retest of the March low, around 23, should be expected.

XLE has resistance near 39.50.  Short-term traders could use that level as the logical level to measure risk against. 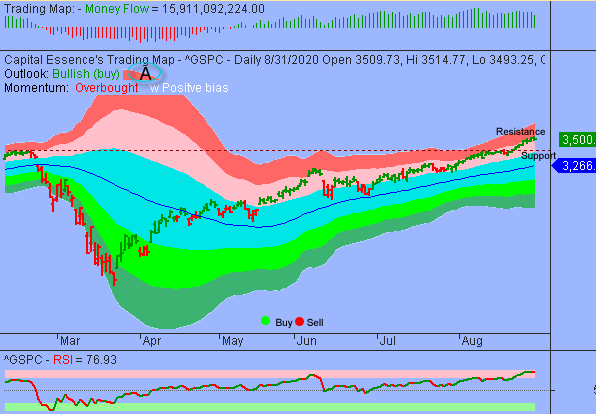 As expected, S&P moved down to test support at the important sentiment 3500 mark after the late August rally found resistance near the lower boundary of the red band.  As mentioned, the normal behavior for the S&P has been to consolidate and retreated almost every time it traded above that level, the way we had in June, so there is a high probability that a significant consolidation pattern will again develop in the coming days.

In summary, an overbought pullback consolidation interrupted the late August rally in the S&P.  Although seemingly vulnerable to further short-term weakness, the overall technical backdrop remains positive so sell-off could be shallow because the sideline money will try to fight its way back into the market.