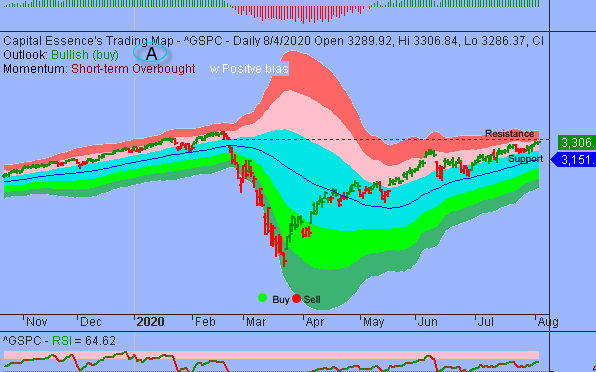 We’ve noted in the previous Market Outlook that: “although overbought condition is keeping buyers at bay, S&P’s 3300 continues to act as price magnet.  Short-term traders can anticipate increase short-term volatility with rapid up and down moves in the market.”  As anticipated, S&P broke above the closely watch 3300 zone Tuesday, up 0.36 percent to 3,306.51, led by energy and real estate, despite uncertainty over the progress among U.S. lawmakers on the next round of coronavirus stimulus.  The Dow Jones Industrial Average gained 0.6 percent to 26,828.47.  The Nasdaq Composite staged a late-day turnaround, added 0.35 percent to 10,941.17.  The CBOE Volatility Index (VIX), widely considered the best gauge of fear in the market, fell more than 2 percent to 23.76.

Sectors tied to the progress of the economy like energy and real estate rallied to keep the broader market in the green. The Real Estate Select Sector SPDR Fund (XLRE) rose 1.49 percent on the day but is down more than 6 percent YTD, underperformed the S&P.  Now the question is what’s next?  Below is an update look at a trade in XLRE. 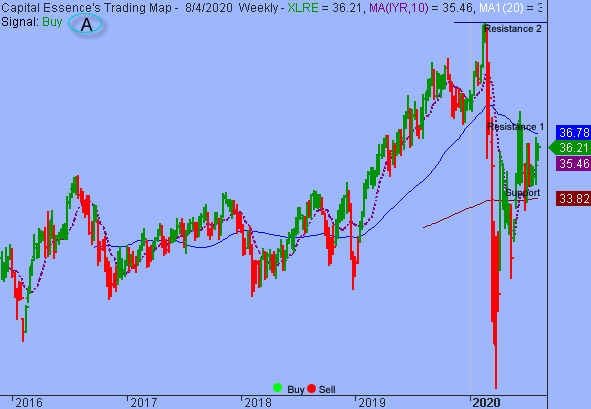 Our “U.S. Market Trading Map” painted XLRE bars in green (buy) – see area ‘A’ in the chart.  The first dominant feature on the chart is the falling trend line starting in early 2020.  The second dominant feature of the chart is the sideways trend between 34 and 37 since late May.  This week’s rally pushed XLRE up against the 1-year moving average, a key technical level based on moving averages, just below 37. This level was tested several times over the past months.  A sustain advance above it is bullish and setting the stage for a rapid advance toward the early 2002 high, around 42.

XLRE has support near 34.  Short-term traders could use that level as the logical level to measure risk against. 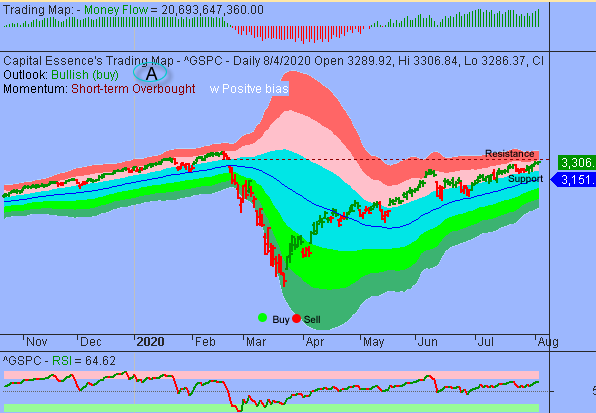 Key technical development in Tuesday session was a close above the important sentiment 3300 mark.  This is a positive development, suggesting that the short-term range bound trading pattern, which has been in place since late July, had resolved itself into a new upswing.  Money Flow measure trended higher from above the zero line, indicating an increase in buying pressure.  Momentum has been strengthened but the return of overbought conditions might put a cap on the upside.  With this in mind, we’d look to reduce exposure into overbought strength, which might take the S&P closer to the late February bearish breakaway gap, around 3330, before a significant pullback unfolds.

In summary, S&P broke key resistance Tuesday, signified the short-term range bound trading pattern had resolved itself into a new upswing.  While the overall technical backdrop remains positive, return of overbought conditions might put a cap on the upside.  With this in mind, we’d look to reduce exposure into overbought strength, which might take the S&P closer to the late February bearish breakaway gap, around 3330, before a significant pullback unfolds.