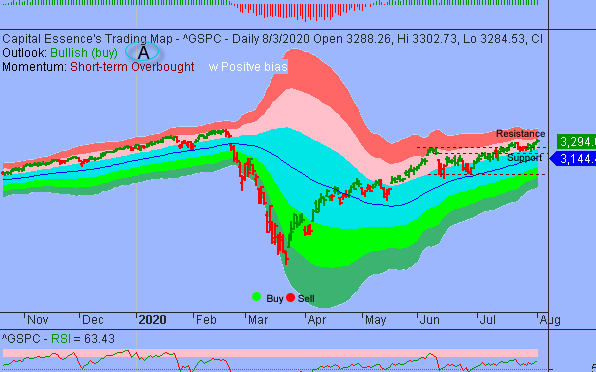 We’ve noted in the previous Market Outlook that: “overbought conditions have returned on a daily basis but momentum remains supportive so downside risk could be limited. It is possible that S&P could continue to drift higher as trading sentiment remains strong.  As for strategy, buying into short-term market dips remains the most profitable strategy.”  As anticipated, stocks surged Monday as big tech continued to drive the broader market higher following bullish earnings last week, while healthcare names rallied on positive coronavirus treatment news.   The S&P gained 0.77 percent to 3,294.61.  The Dow Jones Industrial Average added 0.97 percent to 26,664.40. The Nasdaq Composite jumped 1.57 percent to 10,902.80.  The CBOE Volatility Index (VIX), widely considered the best gauge of fear in the market, fell more than 1 percent to 24.28.

Oil markets began August trading on an ebullient note, rising 2% on encouraging U.S. manufacturing data and bets by market bulls that demand for crude will survive a rollback in output cuts by OPEC.  New York-traded West Texas Intermediate, the benchmark for U.S. crude futures, debuted August with its strongest performance in more than a week, settling up 74 cents, or 1.8%, at $41.01 per barrel.  As such, the SPDR S&P Oil & Gas Exploration & Production ETF (XOP) rose 1.11 percent on the day but is down more than 45 percent YTD, underperformed the S&P.  Now the question is what’s next?  Below is an update look at a trade in XOP. 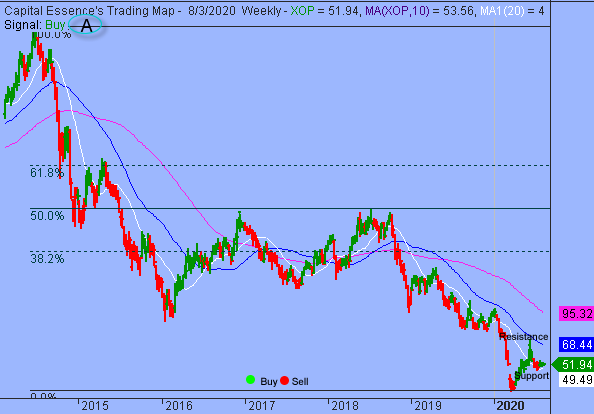 Our “U.S. Market Trading Map” painted XOP bars in green (buy) – see area ‘A’ in the chart.  Over the past few weeks, XOP has been basing sideways using the early May breakout point as support.  This is a positive development, suggesting that the ETF could take another leg higher as soon as it works off overbought conditions.  A close above 54 on a weekly closing basis will confirm this and trigger acceleration toward the 68 zone, or the 1-year moving average.

XOP has support near 49.50.  Short-term traders could use that level as the logical level to measure risk against. 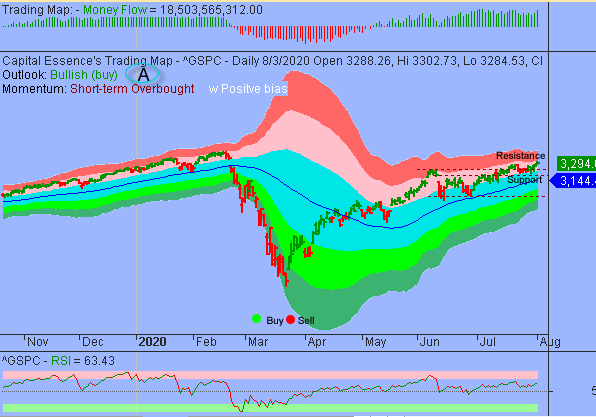 The big picture remains the same. The S&P continues drifting higher after late July selloff found some solid footing near the lower boundary of the pink band.  This is a positive development but let’s notice that with Monday’s gains, the index is about 20 points below lower boundary of the red band, or extreme overbought zone.  Technically speaking, a trade above that level indicates extreme overbought conditions.  The normal behavior for the S&P has been to consolidate and retreated almost every time it traded above that level so there is a high probability that a significant consolidation pattern will again develop in this area.

Nevertheless, Money Flow measure is above the zero line, indicating a positive net demand for stocks.  This certainly would argue that the near-term risk remains to the upside.   With that said while more backing and filling would not be a surprise, if the S&P could hold above 3250 then a move above 3300 would be easier to be achieved.