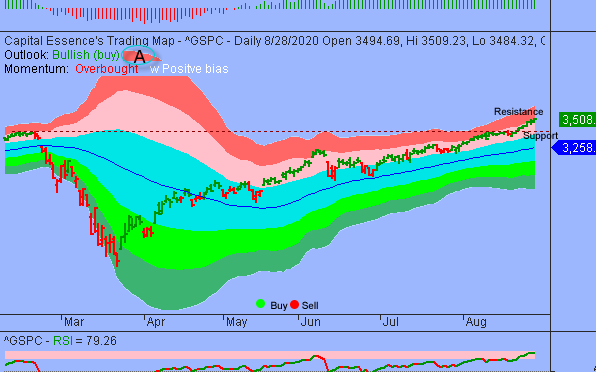 The S&P and NASDAQ notched record highs Friday, as tech continued its march higher in the wake of data pointing to underlying strength in the U.S. consumer.  Consumer spending rose by 1.9% in the month of July, according to the Commerce Department, topping economists’ forecast for a 1.5% increase.  For the day, the S&P gained 0.7 percent to 3,508.01. It was the index’s first-ever close above 3,500. The Nasdaq Composite advanced 0.6 percent to 11,695.63.  The Dow Jones Industrial Average climbed 0.6 percent to 28,653.87.  The CBOE Volatility Index (VIX), widely considered the best gauge of fear in the market, fell more than 6 percent to 22.96.

Big tech also supported the broader move higher as the Fab 5 racked up gains.  Amazon (AMZN), Alphabet (GOOGL), Apple (AAPL), and Microsoft (MSFT) and Facebook (FB), which make up about the quarter of the S&P, closed higher.  As such, the Technology Select Sector SPDR ETF (XLK) rose 0.88 percent on the day and is up more than 34 percent YTD, outperformed the S&P.  Now the question is what’s next?  Below is an update look at a trade in XLK. 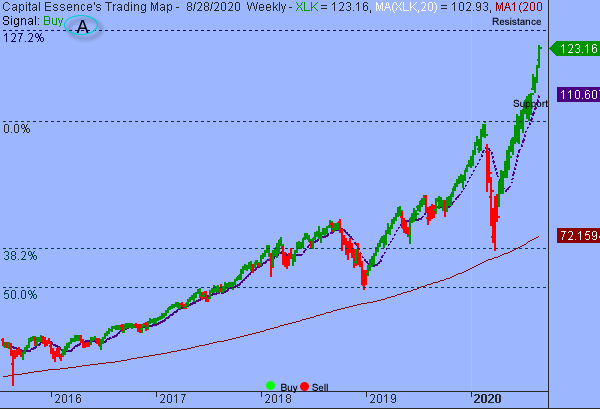 Our “U.S. Market Trading Map” painted XLK bars in green (buy) – see area ‘A’ in the chart. XLK has been on a tear in recent days after breakout above the February high in early July.  The overall technical backdrop remains supportive of further advance. So it seems to us that this rally could take XLK closer to the 127.2% Fibonacci extension, just below 128, before a significant pullback unfolds. 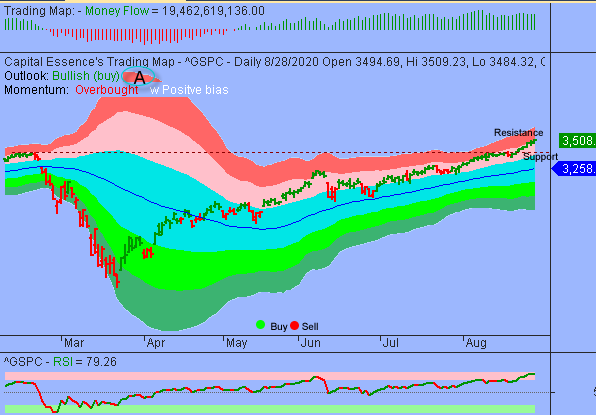 Key technical development in Friday session was a close above the important sentiment 3500 mark.  This is a positive development but let’s notice that the rally has created overbought conditions, the S&P has traded above the lower boundary of the red band for three consecutive sessions.  Technically speaking, the normal behavior for the S&P has been to consolidate and retreated almost every time it traded above that level, the way we had in June, so there is a high probability that a significant consolidation pattern will again develop in this area.

In summary, the fact that market is overbought as S&P poked its head into the level that had been successful in repelling price action in the past suggesting that the market is likely to pare back and consolidate before heading higher again.  So, we would look to increase upside exposure on market dips rather than chasing breakouts.