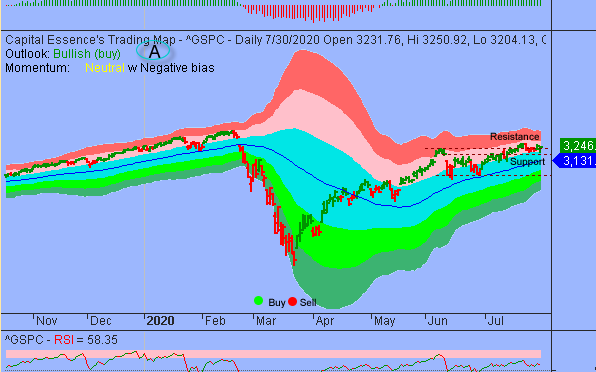 Stock opened markedly lower on Thursday, with the pace of selling accelerating, after the U.S. reported its biggest quarterly economic contraction since records began.  Gross domestic product, or GDP, contracted by 9.5% in absolute terms in the three months through June. Extrapolating that over a full year would give a contraction of 32.9%, although that figure is largely meaningless, given that the lockdowns that caused the recession have since been lifted in large part.  The market however, managed to regain most of the early losses and closed off the intraday lows.  For the day, the Dow Jones Industrial Average slid 0.8 percent to 26,313.65. The S&P dipped 0.4 percent to 3,246.22. The NASDAQ Composite outperformed, added 0.4 percent to 10,587.81.  The CBOE Volatility Index (VIX), widely considered the best gauge of fear in the market, rose nearly 3 percent to 24.76.

Global shares fell on Thursday as the Federal Reserve’s pledge to use all its tools to support the U.S. economy failed to reassure investors uneasy about a stalemate on fiscal support and rising coronavirus cases.  German government bond yields edged towards two-month lows after data showed the economy contracted by 10.1% in the second quarter, its steepest plunge on record.  Europe’s STOXX 600 slipped 0.7 percent on a busy day for earnings.  As such, the iShares Europe ETF (IEV) fell 1.48 percent on the day and is down about 10 percent YTD, underperformed the S&P.  Now the question is what’s next?  Below is an update look at a trade in IEV. 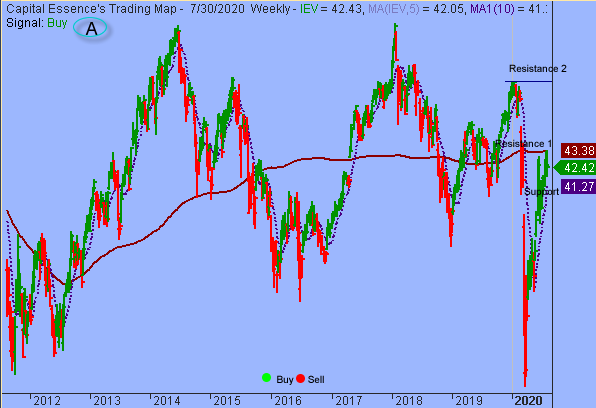 Our “U.S. Market Trading Map” painted IEV bars in green (buy) – see area ‘A’ in the chart.  Like the rest of the world, IEV has been on a tear in recent months after the historic February plunge found some support near the 30 zone.  That level was tested several times over the past years.  The late March rally pushed the ETF up against the 4-year moving average, a key technical level based on moving averages.  The overall technical outlook remains bullish suggesting that this week selloff is merely a short-term pause and IEV will take another leg higher as soon as it works off overbought conditions.  A close above 43.40 on a weekly closing basis will confirm this and opened up for a test of the prior high set earlier this year, around 47.50.

IEV has support near 41.20.  Short-term traders could use that level as the logical level to measure risk against. 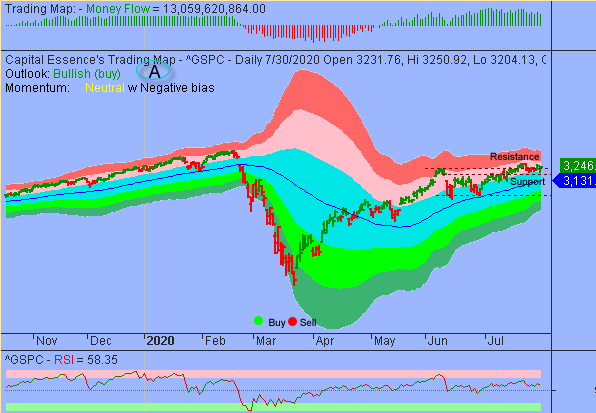 Trading actions in the S&P in early Thursday session exhibiting panic-like-buying behavior, as the stock-market benchmarks, weakened after the worst GOP report on record, came off their lows of the session.  At 3246, the S&P was more than 1 percent off its intraday low of 3204.  This is a bullish development, suggesting that the path with least resistance remains to the upside. Perhaps the positive Money Flow measure is the best illustration of the bull’s case.  Momentum indicator shifted lower but the indicator is much closer to overbought than oversold zone.  This might put a cap on the upside.  It’s also worth noticing that at 3246, the S&P is less than 2 percent below the lower boundary of the red band, or extreme overbought zone.  The normal behavior for the S&P has been to consolidate and retreated almost every time it traded above that level so there is a high probability that a significant consolidation pattern will again develop in this area.  With this in mind, we’d look to reduce exposure into overbought strength, which might take the S&P closer to 3300, based on the lower boundary of the red band, before a significant pullback unfolds.

For now, the bulls will continue to have the benefit of the doubts as long as the S&P holds above 3200.  A close below that level signals a medium-term correction with target around 3100.

In summary, Thursday’s impressive intraday bullish reversal suggesting that the bulls are still in control of the market.  However, given the looming resistance near the 3300 zone on the S&P, there is no big commitment to accumulate stocks aggressively at this point.  What this means is that as the S&P inches into the area of key overhead resistance, aggressive sellers will most likely dips in their toes to see how the market reacts.