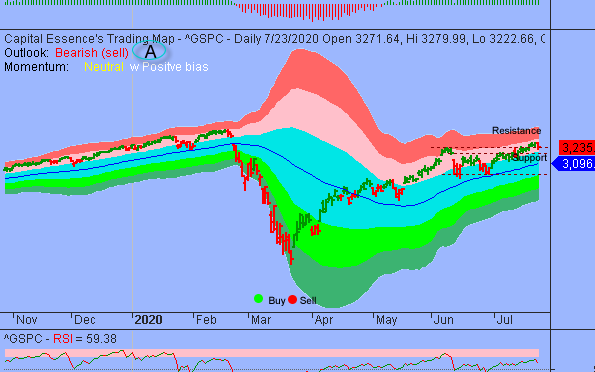 We’ve noted in the previous Market Outlook that: “this week’s rally pushed the index up against the lower boundary of the red band.  As mentioned, the red zone indicated extreme overbought conditions. The normal behavior for the S&P has been to consolidate and retreated almost every time it traded above that level so there is a high probability that a significant consolidation pattern will again develop in this area.”  As anticipated, S&P fell on Thursday, led by tech on further signs the rapid spread of the virus threatens the economic recovery as the number of Americans filing for unemployment rose for the first time in nearly five months. Investor sentiment was dealt a further blow as Republicans confirmed the payroll tax cut would not form part of the coronavirus fiscal package.  For the day, the bench mark gauge slid 1.22 percent to 3,235.66.  The Dow Jones Industrial Average dropped 1.32 percent to 26,652.33.  The Nasdaq Composite fell 2.22 percent to 10,461.42.  The CBOE Volatility Index (VIX), widely considered the best gauge of fear in the market, jumped more than 7 percent to 26.08.

Gold prices jumped more than 1 percent, just shy of the $1,900 level on Thursday, boosted by an easing dollar and hopes for more stimulus to revive virus-hit economies, while a rise in U.S. jobless claims raised concerns of a slower economic recovery.  Spot gold rose 0.8 percent to $1,886.09 per ounce, having hit its highest since September 2011 at $1,897.91. U.S. gold futures settled up 1.3 percent at $1,890.  As such, the SPDR Gold Shares (GLD) rose 0.88 percent on the day and is up 24 percent YTD, outperformed the S&P.  Now the question is what’s next?  Below is an update look at a trade in GLD. 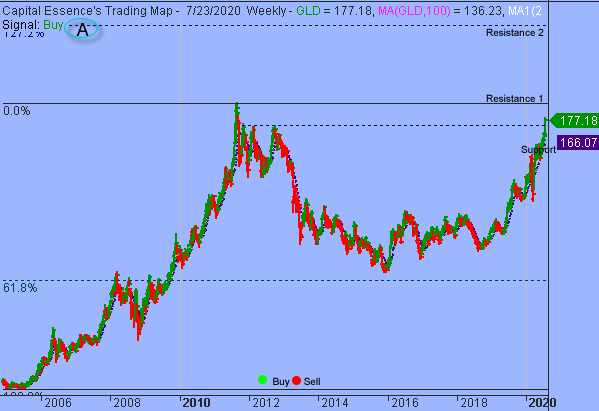 Our “U.S. Market Trading Map” painted GLD bars in green (buy) – see area ‘A’ in the chart.  After dropping about 60 percent from its 2011high, near 185, and met the anticipated support at the 61.8% Fibonacci retracement of the 2005-2011 major upswing, GLD has retraced most of the massive lost.  This week’s rally pushed the ETF above the 175 zone, or the prior highs set in late 2011-2012, signify a bullish breakout.  This is a positive development, suggesting that the entire downtrend will eventually be retraced.  The next resistance is around the 185-186 zone.  A sustain advance above that level could rapidly push prices up to the 225 zone, or the 127.2% Fibonacci extension.

GLD has support near 166.  Short-term traders could use that level as the logical level to measure risk against. 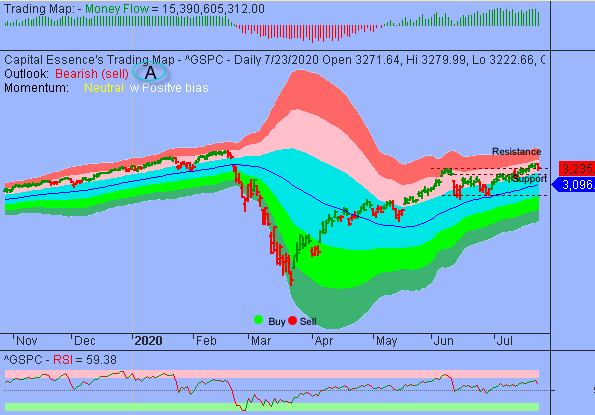 S&P retreated after the early July rally ran out of steam near the lower boundary of the red band.  The index is now testing support at the early June congestion zone.  That level was significant when the S&P climbed above it on Monday. It’s now acting as strong support.

Momentum indicator shifted lower from near overbought zone, suggesting further short-term weakness likely.  Nevertheless, Money Flow measure is above the zero line, indicating a positive net demand for stocks.  This certainly would argue that the path with least resistance remains to the upside.

In summary, an overbought pullback consolidation interrupted the multi-month rally in the S&P.  Although seemingly vulnerable to further short-term weakness, the overall technical backdrop remains positive so sell-off could be shallow because the sideline money will try to fight its way back into the market.