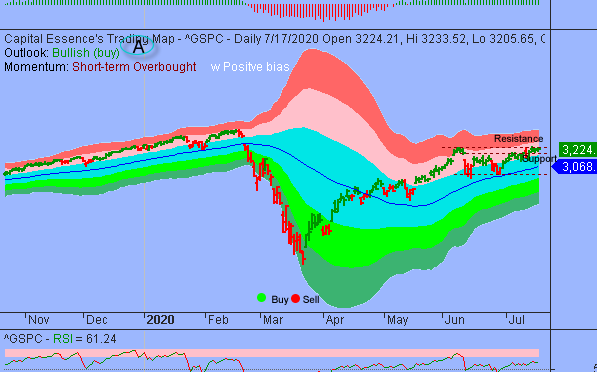 We’ve noted in the previous Market Outlook that: “trading behavior in the S&P constrained by a short-term sideways pattern and shown little evidence of a sustainable change in trend.”  As anticipated, stocks closed Friday mostly along the flatline as investors weighed the prospect of more fiscal stimulus against fears of further business disruptions due to a record rise in COVID-19 cases.  The S&P gained 0.3 percent to 3,224.73. The Nasdaq Composite added 0.3 percent to 10,503.19.  The Dow Jones Industrial Average fell 0.2 percent to 26,671.95.  The CBOE Volatility Index (VIX), widely considered the best gauge of fear in the market, fell more than 8 percent to 25.68.

Tech stocks were under selling pressure after Netflix (NFLX) reported second-quarter earnings that missed analyst expectations, pushing the stock down 6.5 percent.   The company’s weak guidance for third-quarter subscriber growth — a key metric for the streaming giant — also contributed to the steep sell-off in the stock.  As such, the Technology Select Sector SPDR ETF (XLK) fell 0.49 percent on the day but is up more than 16 percent YTD, outperformed the S&P.  Now the question is what’s next?  Below is an update look at a trade in XLK. 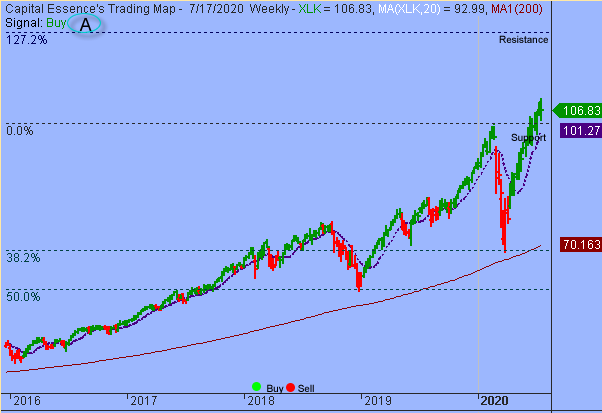 Our “U.S. Market Trading Map” painted XLK bars in green (buy) – see area ‘A’ in the chart. XLK has been on a tear in recent months after the February selloff found some solid footing near the 68 zone, or the 38.2% Fibonacci retracement.  The March rally pushed the ETF above the prior high set in February, signify a bullish breakout and upside reversal.  The early July rally tested resistance at the 110 zone.  Last week’s bearish trading action suggested that the resistance would hold.  This is a short-term negative development, increased the probability for a retest of support near the 100 zone.  That level is significant in charting terms.  It must hold on a weekly closing basis to prevent a test of the 90-80 zone.

A sustain breakout above 110 would trigger acceleration toward the 126 zone, or the 127.2% Fibonacci extension.

XLK has support near 100.  Short-term traders could use that level as the logical level to measure risk against. 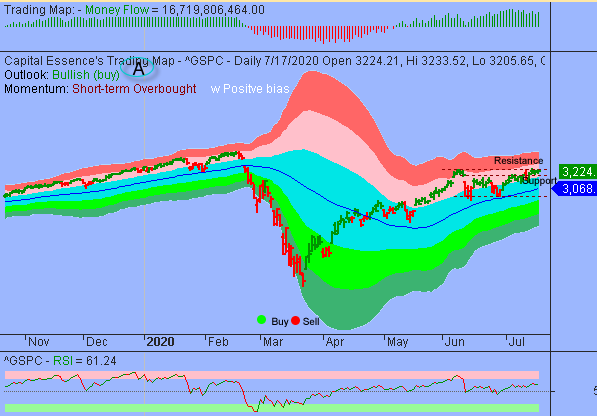 The big picture remains the same.  S&P continues basing sideways near resistance at the early June congestion zone.  Money Flow measure is above the zero line, indicating a positive net demand for stocks.  This is a bullish development, suggesting that the index will take a new leg higher as soon as it works off excessive optimism.

For now, the early June congestion zone, around 3230, acted as strong resistance.  A close above it is required to neglect the short-term sideways trading pattern.  With that said, there is no reason to turn particularly bullish until this area is eclipsed.

On the downside, 3100 is the line in the sand.  That level was significant when the index climbed above it in late June.  When strong support is broken it means that near-term buying pressure has finally been exhausted.  With that said, a close below 3100 is outright bearish and a much deeper pullback should be expected and we’re looking at 3000-2900.

In summary, the big picture remains the same.  There’s an orderly high-level consolidation period near the early June congestion zone, around S&P’s 3230, which represented the digestion period in the aftermath of the late June rally.  The fact that the index managed to hold on to most of recent gains despite overbought conditions, indicating an internal strength.  This increases the probability that the S&P will break out to new highs as soon as the market shakes off the excessive bullishness.