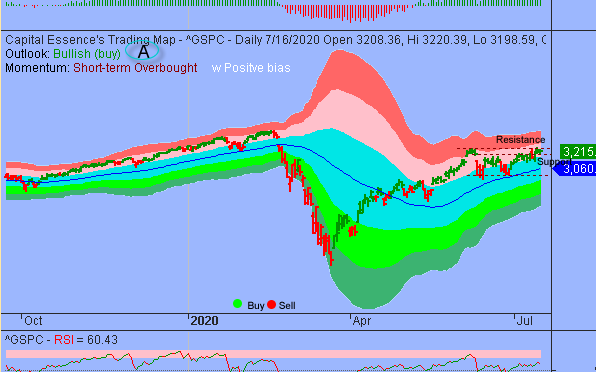 Stocks fell Thursday as a slide in technology stocks overshadowed mostly bullish earnings at a time when rising U.S. Covid-19 cases shows no sign of letting up.  The Dow Jones Industrial Average dropped 0.5 percent to 26,734.71.  The S&P slid 0.3 percent to 3,215.57 and the Nasdaq Composite pulled back 0.7 percent to 10,473.83.  The CBOE Volatility Index (VIX), widely considered the best gauge of fear in the market, rose less than 1 percent to 28.

Energy cut its gains on the day, as oil prices fell after OPEC and its allies agreed to rein in production cuts.  OPEC+ will reduce their cuts to 7.7 million barrels per day through December from the 9.7 million bpd cuts in place since May.  Brent crude fell 45 cents, or 1 percent, to $43.35 per barrel. West Texas Intermediate crude settled 45 cents, or 1.09 percent, lower at $40.75 per barrel.  As such, the Energy Select Sector SPDR ETF (XLE) fell 0.45 percent on the day and is down 38 percent YTD, underperformed the S&P.  Now the question is what’s next?  Below is an update look at a trade in XLE. 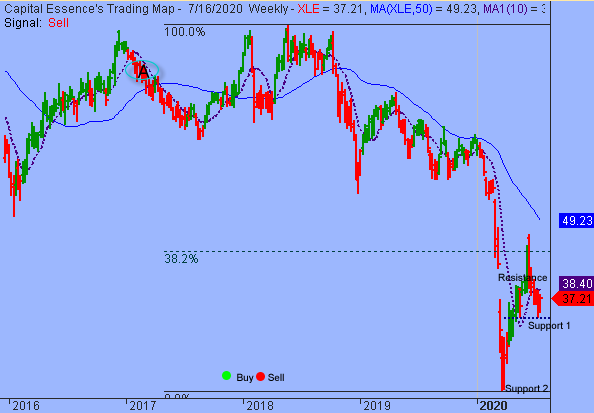 Our “U.S. Market Trading Map” painted XLE bars in red (sell) – see area ‘A’ in the chart. Over the past few weeks, XLE has been trending lower after the late March oversold bounce ran out of steam near the 38.2% Fibonacci retracement.  The June downswing is testing support at the early May breakout point, around 36.  That level is significant in charting terms.  a failure to hold above it on a weekly closing basis suggested that most buyers has already placed their bets and XLE will have to go to a much lower level to attract new buyers and we’re looking at the March low, just below 23.

XLE has resistance near 38.40.  Short-term traders could use that level as the logical level to measure risk against. 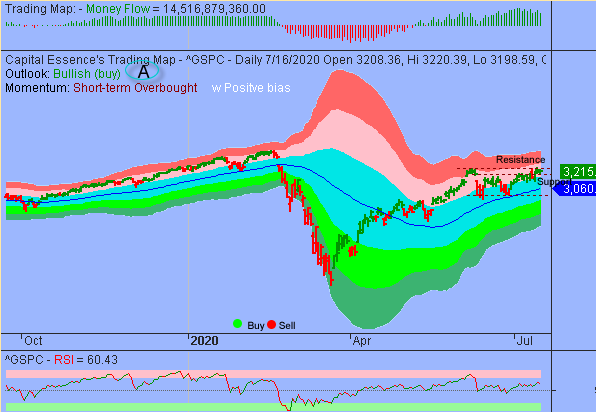 S&P continues basing sideway using the 3200 zone as support after recent rally attempt found resistance at the early June congestion zone.  Market internal has been deteriorated but downside momentum does not appear strong enough to generate widespread breakdowns.  Near-term, there is a high probability that a significant consolidation pattern will again develop around the 3230 zone.

For now, the early June congestion zone, around 3230, acted as strong resistance.  A close above it is required to neglect the short-term sideways trading pattern.  With that said, there is no reason to turn particularly bullish until this area is eclipsed.

On the downside, 3100 is the line in the sand.  That level was significant when the index climbed above it in late June.  When strong support is broken it means that near-term buying pressure has finally been exhausted.  With that said, a close below 3100 is outright bearish and a much deeper pullback should be expected and we’re looking at 3000-2900.

In summary, trading behavior in the S&P constrained by a short-term sideways pattern and shown little evidence of a sustainable change in trend.  For now, 3230 is the line in the sand.  There is a no reason to turn particularly bearish until this area is taking out.