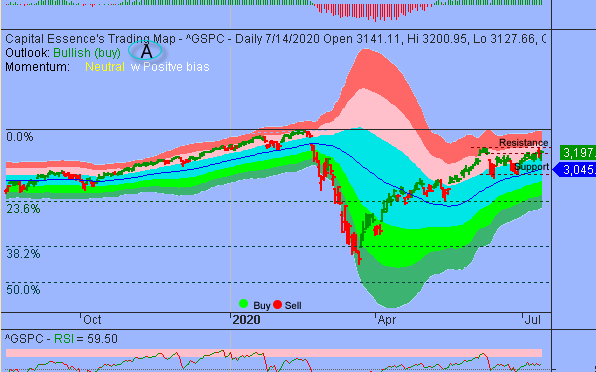 We’ve noted in the previous Market Outlook that: “momentum deteriorated as S&P struggled to get pass the early June congestion zone.  Monday’s weakness had improved the posture of our short-to-intermediate indicators, which is supportive of further pullback.   The longer the index stays below 3230, the more vulnerable it is to lower prices.”  As anticipated, S&P traded lower in early Tuesday session amid rising Covid cases.  The index however, managed to overcome the early weakness and traded higher, climbed 1.3 percent to 3,197.52, as investors added exposure to some of the more cyclical names.  The Dow Jones Industrial Average rose 2.1 percent to 26,642.59.  The Nasdaq Composite added 1 percent to 10,488.58.  The CBOE Volatility Index (VIX), widely considered the best gauge of fear in the market, fell more than 8 percent to 29.52.

Financials ended higher following mixed earnings from banks as JPMorgan and Citigroup beat consensus estimates thanks to strong trading revenue, while Wells Fargo cut its dividend by 80 percent and reported its first-quarter loss in more than a decade.  As such, the Financial Select Sector SPDR ETF (XLF) rose 0.51 percent on the day but is down more than 23 percent YTD, underperformed the S&P.  Now the question is what’s next?  Below is an update look at a trade in XLF. 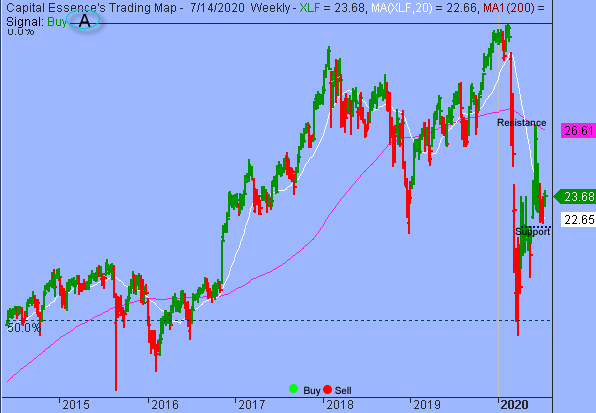 Our “U.S. Market Trading Map” painted XLF bars in green (buy) – see area ‘A’ in the chart. Over the past few days, XLF has been basing sideways using the late May breakout point as support after the March rally ran out of steam near the 2-year moving average, a key technical level based on moving averages.  This week’s bullish trading action suggested that the support would hold and opened up for a retest of the early June high, just above 26.

XLF has support just above 22.  Short-term traders could use that level as the logical level to measure risk against. 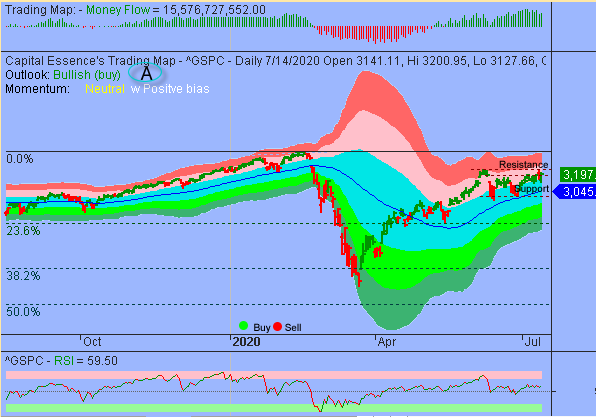 Once again, the S&P rebounded nicely after the early selloff attempt found some solid footing just above the important sentiment 3100 mark.  That level was retested in several times over the past weeks.  This history indicated an important role in terms of support.  Tuesday’s bullish reversal invalidated Monday’s bearish reversal signal, putting the S&P back into the short-term sideways trading pattern that has been in place since the early July.  Market internal has been deteriorated following recent setback but downside momentum does not appeared strong enough to generate widespread breakouts.  With that said we wouldn’t read too much into Tuesday trading action as it keeps the S&P within its short-term consolidation phase.

Over the next few days, the most important thing to watch is the retreat and rebound behaviors as the 3100 zone is tested as support. That level was significant when the index climbed above it in late June.  When strong support is broken it means that near-term buying pressure has finally been exhausted.  With that said, a close below 3100 is outright bearish and a much deeper pullback should be expected and we’re looking at 3000-2900.

For now, the early June congestion zone, between 3190 and 3230, acted as strong resistance.  A close above it is required to neglect the short-term sideways trading pattern.  With that said, there is no reason to turn particularly bullish until this area is eclipsed.

In summary, S&P remains in a short-term consolidation phase that reflects an indecisive market.  Resistance is strong near the early June congestion zone, between 3190 and 3230, and upside momentum does not appear strong enough to generate a decisive breakout.  While near-term risk is greater to the upside, markets are volatile and traders may prefer not to hold large positions overnight.