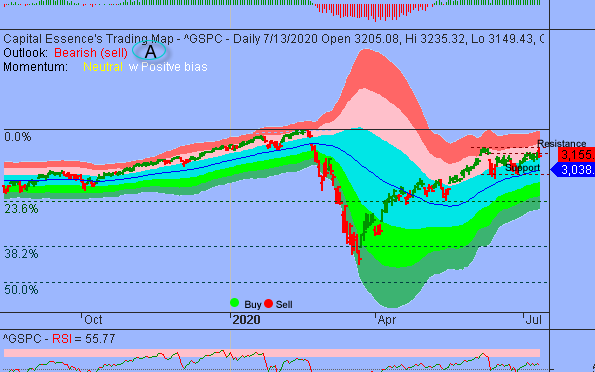 We’ve noted in the previous Market Outlook that: “S&P stuck in sideways trading pattern for more than a week since breaking out in late June.  Short-term technical outlook remains positive but upside momentum does not appear strong enough to generate widespread breakouts.  Near-term, there is a high probability of a period of consolidation activity between S&P’s 3100 and 3200 that may last several weeks if not months.  This consolidation band provides a rally and retreat trading environment for traders.”  As anticipated, S&P dipped after briefly touching its highest level since February 25. The index has rebounded over 40 percent since mid-March, even as COVID-19 infections rose rapidly in Arizona, California and Texas and about 35 other states.  For the day, the bench mark gauge fell 0.9 percent to 3,155.22.  The Nasdaq Composite dropped 2.16 percent to 10,390.84.  The Dow Jones Industrial Average eked out a gain of less than 0.16 percent to 26,085.80.  The CBOE Volatility Index (VIX), widely considered the best gauge of fear in the market, surged 18 percent to 32.19.

Tech stocks, which outperformed in recent months, including Amazon (AMZN), Microsoft (MSFT), Nvidia (NVDA) and Facebook (FB), ended down more than 2 percent after gaining earlier in the day. Selling accelerated after California Governor Gavin Newsom ordered a massive retrenchment of the state’s reopening, shutting bars and banning indoor restaurant dining statewide and closing churches, gyms and hair salons in hardest-hit counties.  As such, the Technology Select Sector SPDR ETF (XLK) fell 2.07 percent on the day but is up more than 15 percent YTD, outperformed the S&P.  Now the question is what’s next?  Below is an update look at a trade in XLK. 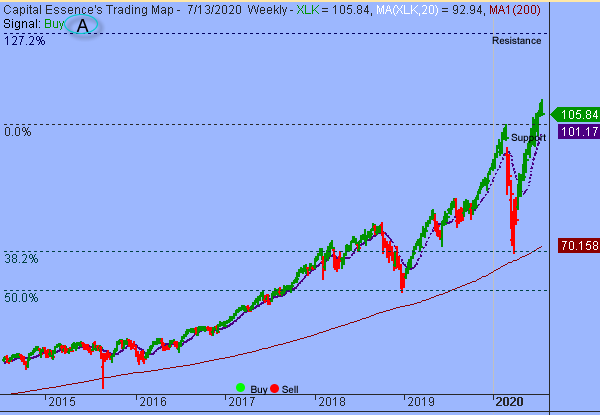 Our “U.S. Market Trading Map” painted XLK bars in green (buy) – see area ‘A’ in the chart.  IBB has been on a tear in recent months after the February massive selloff found some solid footing near the 68 zone.  The late March rally pushed the ETF above the prior high set in February, signify a bullish breakout and upside reversal.  Monday’s early rally attempt found some resistance near the 110 level.  The massive mid-day reversal suggested that the resistance would hold and a retest of the 100 level should be followed shortly.  That level is significant in charting terms.  It must hold on weekly closing basis to prevent a major trend shift.   A successful test of that evel will increase the probability for a rapid advance toward the 126 zone, or the 127.2% Fibonacci extension.

XLK has support just above 100.  Short-term traders could use that level as the logical level to measure risk against. 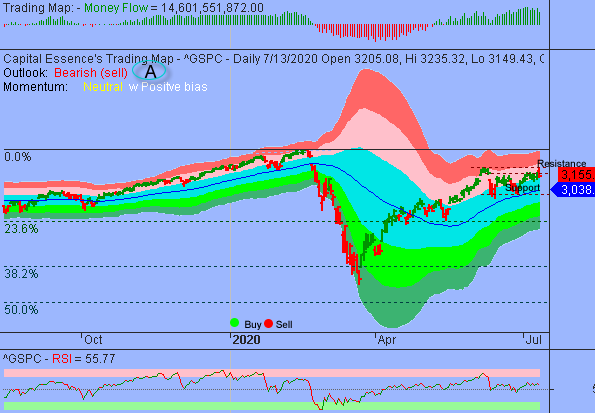 As expected, S&P sold off sharply after the early rally attempt ran out of steam near the early June congestion zone.  That level was retested in several times over the past weeks.  This history indicated an important role in terms of resistance.  In accordance to the Japanese candlestick pattern recognition, Monday’s massive bearish engulfing bar is a clear indication of supply overwhelming demand.  Money Flow measure and momentum had been deteriorated as prices climbed, indicating a lack of commitment among the bulls.  These elements increased the likelihood of further weakness in the days ahead.

Over the next few days, the most important thing to watch is the retreat and rebound behaviors as the 3100 zone is tested as support. That level was significant when the index climbed above it in late June.  When strong support is broken it means that near-term buying pressure has finally been exhausted.  With that said, a close below 3100 is outright bearish and a much deeper pullback should be expected and we’re looking at 3000-2900.

For now, the early June congestion zone, between 3190 and 3230, acted as strong resistance.  A close above it is required to neglect the short-term sideways trading pattern.  With that said, there is no reason to turn particularly bullish until this area is eclipsed.

In summary, momentum deteriorated as S&P struggled to get pass the early June congestion zone.  Monday’s weakness had improved the posture of our short-to-intermediate indicators, which is supportive of a pullback.   The longer the index stays below 3230, the more vulnerable it is to lower prices.