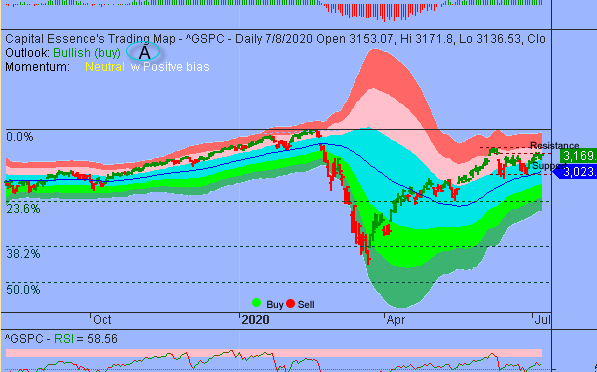 We’ve noted in the previous Market Outlook that: “the late June rally is showing signs of buyer’s fatigue, noting a struggle for the S&P to get far past the early June congestion zone.”  As anticipated, S&P swung between gains and losses on Wednesday as investors continued to back tech while sectors tied to the progress of the economy faltered amid rising Covid-19 cases.  The bench mark gauge closed higher as late-buying swept through Wall Street, led by tech, up 0.8 percent to 3,169.94 and the Nasdaq Composite advanced 1.2 percent to 10,492.50, notching a record closing high.  The Dow Jones Industrial Average rose 0.7 percent to 26,067.28.  The CBOE Volatility Index (VIX), widely considered the best gauge of fear in the market, fell nearly 5 percent to 28.08.

A surge in tech stocks powered the broader market higher.  Apple (AAPL) closed at all-time highs as Wall Street continued to back the stock on signs of a strong rebound in sales.  Twitter (TWTR), surged 7 percent as investors cheered signs that the company is taking steps to boost sales.  As such, the Technology Select Sector SPDR ETF (XLK) rose 1.63 percent on the day and is up about 18 percent YTD, outperformed the S&P.  Now the question is what’s next?  Below is an update look at a trade in XLK. 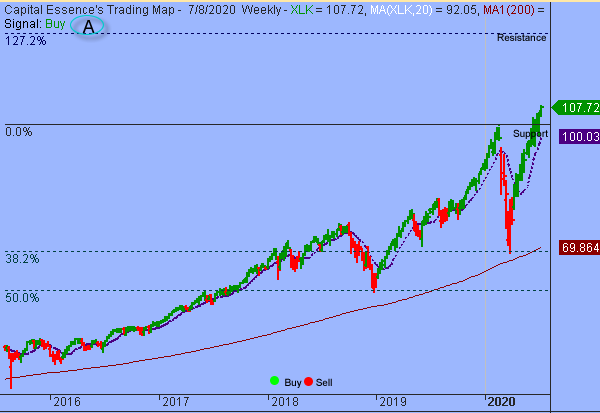 Our “U.S. Market Trading Map” painted XLK bars in green (buy) – see area ‘A’ in the chart.  Over the past few weeks, XLK has been basing sideways near the 100 zone as support as it worked off overbought conditions.  This week’s upside follow-through confirmed last week’s breakout above the one-month sideways trading pattern, signify a bullish breakout and upside reversal. This is a positive development, opened up for a test of the 126 zone, or the 127.2% Fibonacci extension.

XLK has support near 100.  Short-term traders could use that level as the logical level to measure risk against. 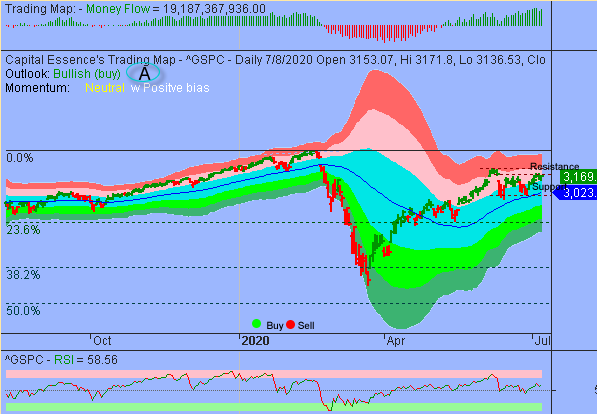 Once again, the S&P rebounded nicely after the early selloff attempt found some solid footing near the lower boundary of the pink band.  That level was tested several times over the past days.  Market internal has strengthened but upside momentum does not appeared strong enough to generate widespread breakouts.  So we wouldn’t read too much into Wednesday trading action as it keeps the S&P within its short-term consolidation phase.

For now, 3100 is the line in the sand.  That level was significant when the index climbed above it last week.  When strong support is broken it means that near-term buying pressure has finally been exhausted.  With that said, a close below 3100 is outright bearish and a much deeper pullback should be expected and we’re looking at 3000-2900.

On the upside, there is a strong band of resistance between 3190 and 3230 zone, or the early June breakdown point. There is no reason to turn particularly bullish until this zone is eclipsed.

In summary, we wouldn’t look too much into recent trading action as because it keeps the S&P within its short-term consolidation phase. Resistance is strong near the early June congestion zone and upside momentum does not appear strong enough to generate a decisive breakout.