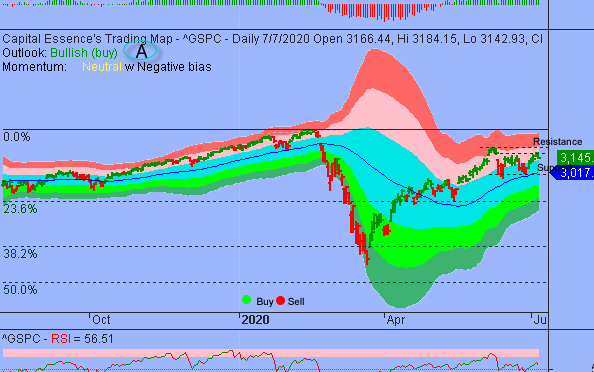 We’ve noted in the previous Market Outlook that: “while short-term overbought condition could keep buyers at bay, the early June’s congestion zone, between S&P’s 3190 and 3230, continues to act as price magnet.  Short-term traders can anticipate increase short-term volatility with rapid up and down moves in the market.”  As anticipated, S&P closed lower at the end of the volatile trading session Tuesday, down 1.1 percent to 3,145.32 as rising coronavirus cases continued to force parts of the U.S. to roll back reopening measures that could hurt the economy’s chances of a robust recovery.  The Dow Jones Industrial Average dropped 1.5 percent to 25,890.18.  The Nasdaq Composite, which hit a record high earlier in the day, fell 0.9 percent to 10,343.89.  The CBOE Volatility Index (VIX), widely considered the best gauge of fear in the market, rose more than 5 percent to 29.43.

The rolling back of reopening plans in some states has proved a major blow to airlines hoping for a rebound in travel demand.  United Airlines (UAL) warned weaker demand would lead to job cuts in the coming months, sending its shares 7.4 percent lower.  As such, the iShares Transportation Average ETF (IYT) fell 1.15 percent on the day and is down about 16 percent YTD, underperformed the S&P.  Now the question is what’s next?  Below is an update look at a trade in IYT. 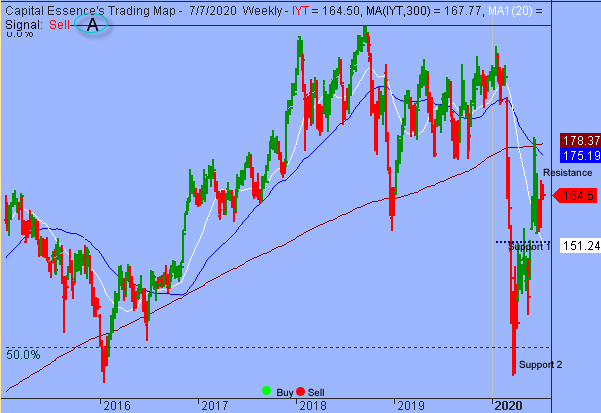 Our “U.S. Market Trading Map” painted IYT bars in red (sell) – see area ‘A’ in the chart.  Over the past few weeks, IYT has been basing sideways using the 155 zone as support after the late March rally ran into resistance at the 4-year moving average, just below the 180 zone.  This week’s bearish trading action is a clear indication of supply overwhelming demand, suggesting that the ETF might have to move to a much lower level to attract new buyers.  Right now, the most important thing to watch is trading actions near the 155-150 zone.  A close below 150 on a weekly closing basis signify a bearish breakout and a retest of the March low should be expected.

IYT has support near 175.  Short-term traders could use that level as the logical level to measure risk against. 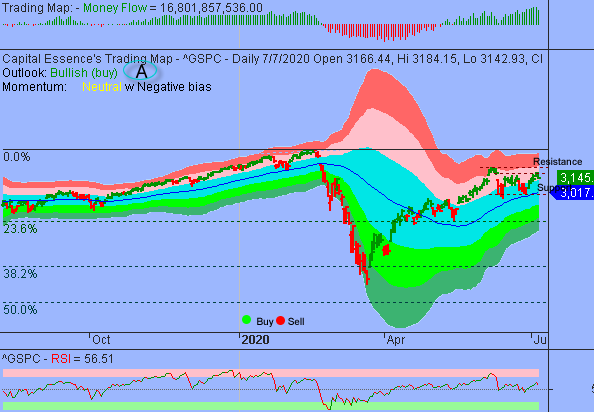 As expected, S&P moved down to test support at the lower boundary of the pink band after the late June rally ran into resistance near the early June breakdown point.  Momentum indicator shifted lower from below the overbought zone, indicating an internal weakness.  Right now, the most important thing to watch is trading behaviors as the important sentiment 3100 zone is tested as support.   That level was significant when the index climbed above it last week.  When strong support is broken it means that near-term buying pressure has finally been exhausted.  With that said, a close below 3100 is outright bearish and a much deeper pullback should be expected and we’re looking at 3000-2900.

On the upside, there is a strong band of resistance between 3190 and 3230 zone, or the early June breakdown point. There is no reason to turn particularly bullish until this zone is eclipsed.

In summary, the late June rally is showing signs of buyer’s fatigue, noting a struggle for the S&P to get far past the early June congestion zone.  A failure to move above key resistance means that most of the potential buyers at this level had already placed their bets. The next batch of buyers typically sits at a much lower level.  This is the danger in the current market.