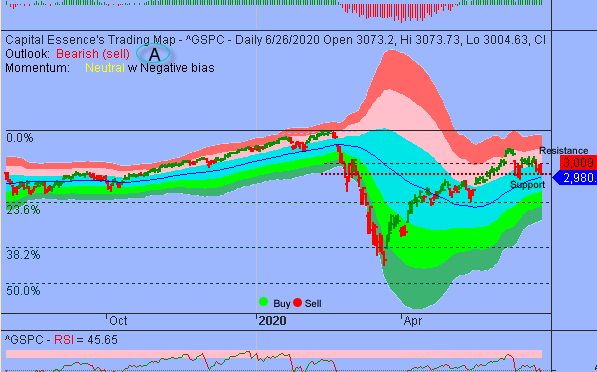 We’ve noted in the previous Market Outlook that: “market internal has been strengthened after recent pullback found support near S&P’s 3000 zone but upside momentum does not appear strong enough to generate widespread breakouts.  Near-term, there is a high probability of a period of consolidation activity between S&P’s 3000 and 3100 that may last several days if not weeks.  This consolidation band provides a rally and retreat trading environment for traders.”  As anticipated, Wall Street tumbled more than 2 percent on Friday as several U.S. states imposed business restrictions in response to a surge in coronavirus cases.  Adding to concerns is the Wall Street Journal report that the Phase 1 U.S.-China trade deal could be at risk placed additional pressure on U.S. stocks.  According to that report, Chinese officials warned that “meddling” in Hong Kong and Taiwan could lead Beijing to back away from its commitment to purchase U.S. farm goods.  For the day, the Dow Jones Industrial Average fell 2.8 percent to 25,015.55. The S&P slid 2.4 percent to 3,009.05 and the Nasdaq Composite dropped 2.6 percent to 9,757.22.   The CBOE Volatility Index (VIX), widely considered the best gauge of fear in the market, fell about 5 percent to 32.22.

Nike (NKE) shares slid 7.6 percent on the back of a surprising quarterly loss for the apparel giant. The company reported a loss of 51 cents per share and revenue of $6.31 billion for its fiscal fourth quarter. Nike’s quarterly revenue reflected a drop of 38% on a year-over-year basis.  The losses on Friday came despite a record rise in consumer spending in May. The Commerce Department reported Friday that spending increased 8.2% last month, a positive sign for the U.S. economy amid a growing number of negative coronavirus headlines.  As such, the SPDR S&P Retail ETF (XRT) fell 1.32 percent on the day and is down more than 10 percent YTD, underperformed the S&P.  Now the question is what’s next?  Below is an update look at a trade in XRT. 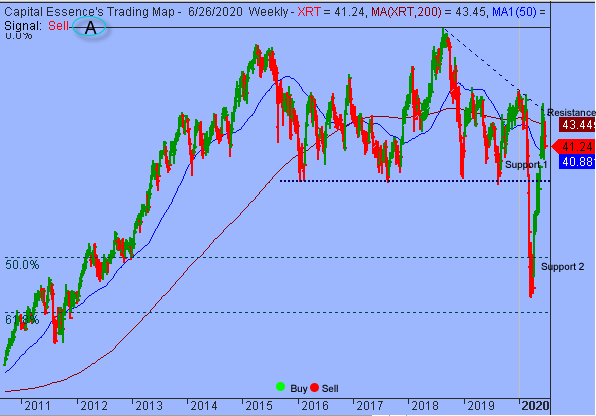 Our “U.S. Market Trading Map” painted XRT bars in red (sell) – see area ‘A’ in the chart.  Over the past few weeks, XRT has been basing sideways using the 1-year moving average as support after the March rally ran out of steam near the 2018 falling trend line.  Last week’s bearish trading action suggested that the support would not hold for long.  While seemingly vulnerable to further short-term weakness, support is strong near the 40-38 zone.  This could help putting a short-term floor under the ETF.  A close below 38 on a weekly closing basis will bring the March low, just above 26, into view.

XRT has resistance just above 45.  Short-term traders could use that level as the logical level to measure risk against. 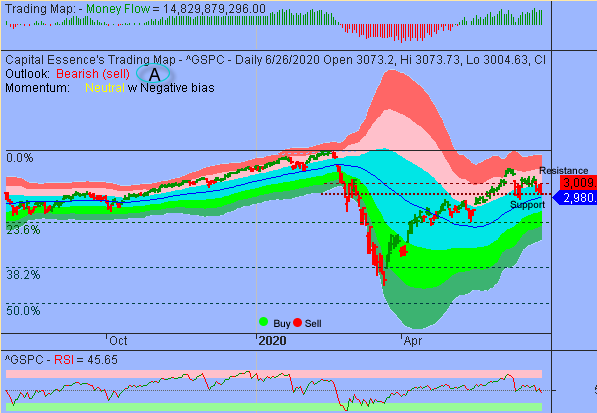 As expected, S&P moved down to test support at the 3000 zone after falling below 3100 on Wednesday.  Momentum shifted lower but the indicator is much closer to oversold than overbought zone.  Additionally, Money Flow measure held firmly above the zero line, indicating a positive net demand for stocks.  This could help putting a short-term floor under the market.

Over the next few days, it’d be important to monitor the retreat and rebound behaviors as the trend channel moving average, just below 3000, is tested as support.  A close below that level is outright bearish and a much deeper pullback should be expected and we’re looking at 2900-2700.

In summary, S&P’s quick run is showing some signs of exhaustion. Last week’s selloff is testing support at the important sentiment 3000 zone.  This level is significant in charting terms.  A failure to hold above it suggests that most of the potential buyers at this level had already placed their bets.  The next batch of buyers typically sits at a much lower level and we’re looking at 2900-2700.