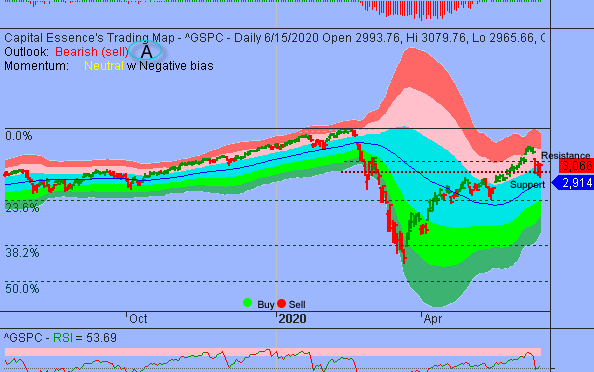 We’ve noted in the previous Market Outlook that: “Money Flow measure and momentum had been deteriorated as S&P worked off excessive optimism.  We expect increase in near-term volatility as the index tests support at the 3000 zone. This area is too big and too important to fall quickly so it should not be surprising to see some backings and fillings in the coming days.”  As expected, stocks closed higher Monday, recovering from earlier losses that saw the S&P fell as much as 2.5 percent earlier in the day as investors weighed further efforts by the Federal Reserve to support credit markets against a jump in Covid-19 infections across U.S. and other parts of the world that threatens to disrupt the pace of the economic reopening. For the day, the bench mark gauge gained 0.8 percent to 3,066.59 while the Nasdaq Composite advanced 1.4 percent to 9,726.02.  The Dow Jones Industrial Average added 0.6 percent to 25,763.16.  The CBOE Volatility Index (VIX), widely considered the best gauge of fear in the market, fell more than 4 percent to 34.40.

Travel and tourism, sectors sensitive to the pace of reopenings, pared some of their losses and helped the broader market bounce from session lows.  As such, the iShares Transportation Average ETF (IYT) rose 0.72 percent on the day but is down more than 17 percent YTD, underperformed the S&P.  Now the question is what’s next?  Below is an update look at a trade in IYT. 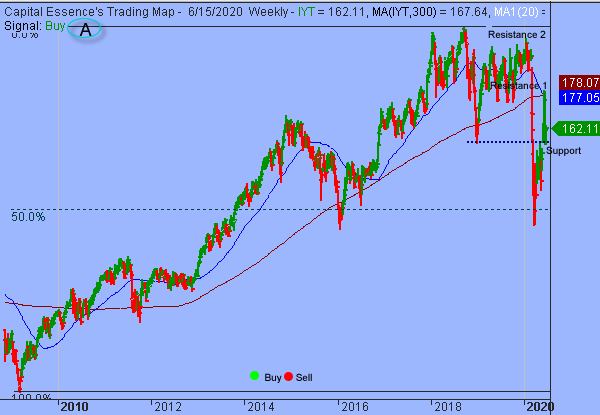 Our “U.S. Market Trading Map” painted IYT bars in green (buy) – see area ‘A’ in the chart. Over the past few weeks, IYT has been trending lower in a short-term corrective mode after the late March rally ran into the massive 2-conjoining resistance near the 178 zone.  The correction tested support at the 155 zone.  That level was significant when the ETF fell below it in early March and then climbed above it in late May.  Monday’s bullish trading action suggested that the support would hold and setting the stage for a retest of the 178 zone.  A sustain advance above that level will trigger acceleration toward the 200 zone.

IYT has support near 155.  Short-term traders could use that level as the logical level to measure risk against. 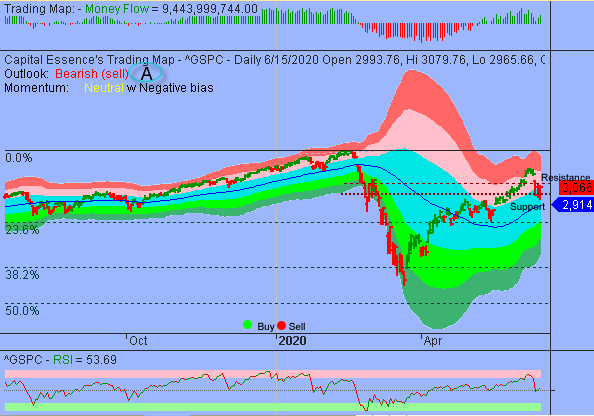 Once again, the S&P rebounded after the early selloff attempt was met with a new wave of buying interest, sending the index above the important sentiment 3000 mark after falling below it in early Monday session.  That level is significant in charting terms.  As mentioned, 3000 is the line in the sand.  A failure to hold above it indicated that long-term buying pressure has been exhausted and a much deeper pullback should be expected and we’re looking at 2900, based on the trend channel moving average.

Market internal has been strengthened following Monday impressive reversal but upside momentum does not appeared strong enough to generate widespread breakouts.  S&P has 3100 to trade against. There is no reason to turn particularly bullish until this area is eclipsed.

In summary, there is currently a test of support at the important sentiment 3000 mark.  While more backing and filling would not be a surprise, the longer the S&P stays near that level, the more vulnerable it is to lower prices.  This is the real danger in the current market.