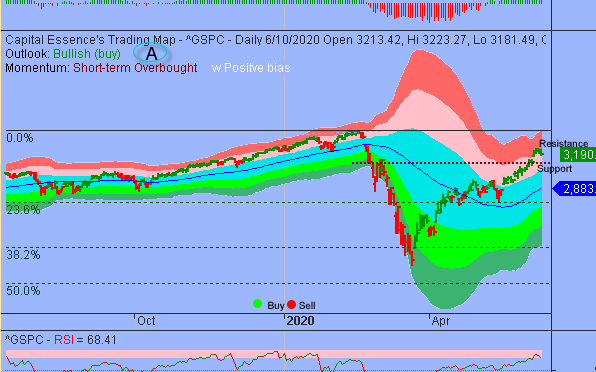 We’ve noted in the previous Market Outlook that: “S&P shifted to consolidation mode after last week’s rally ran out of steam near the lower boundary of the red band.”  As anticipated, S&P fell for a second straight day on Wednesday, down 0.5 percent to 3,190.17, as traders once again took profits out of names benefiting from the economy reopening and rotated into mega-cap tech stocks.  The Dow Jones Industrial Average slid 1 percent to 26,989.99 The NASDAQ Composite, meanwhile, jumped 0.7 percent to 10,020.35, marking its first-ever close above 10,000.  The CBOE Volatility Index (VIX), widely considered the best gauge of fear in the market, unchanged at 27.57.

Notably, a jump in Covid-19 infections amid easing restrictions nationwide prompted investors to pull some of their bullish bets on energy.  Chevron (CVX) down 3.9 percent, Exxon Mobil (XOM) down 5.4 percent, and Occidental Petroleum (OXY) down 10.4 percent, were among the notable decliners in energy.  As such, the SPDR S&P Oil & Gas Exploration & Production ETF (XOP) tumbled 7.30 percent on the day and is down nearly 35 percent YTD, underperformed the S&P.  Now the question is what’s next?  Below is an update look at a trade in XOP. 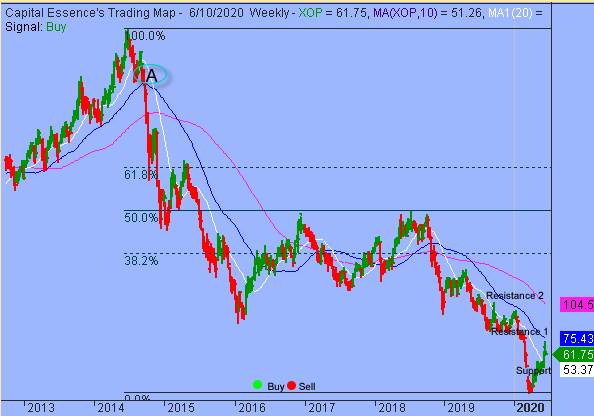 Our “U.S. Market Trading Map” painted XOP bars in green (buy) – see area ‘A’ in the chart.  XOP has been on a tear in recent weeks after the January massive selloff found some solid footing near the 30 zone. The March rally pushed the ETF up against the 1-year moving average, a key technical level based on moving averages.  This week’s bearish trading action suggested that the resistance would hold and a retest of support at the 53 zone should be expected. That level is significant in charting terms.  it must hold on a weekly closing basis to prevent a retest of the March low.

If the ETF is going to find bottom in the near term, we want to see it stabilizes and climbs above 75.  Staying below that level heralds more losses.  With that said, a sustain breakout above 75 on a weekly closing basis will bring the 100 zone into view.

XOP has support near 53.  Short-term traders could use that level as the logical level to measure risk against. 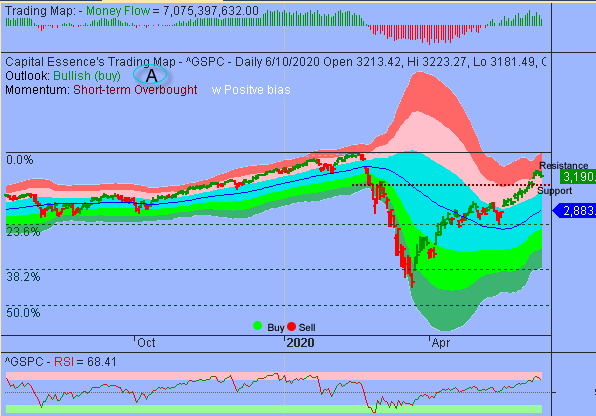 S&P fell below the lower boundary of the red band, or extreme overbought zone.  After climbed above that level last week. As the chart makes clear, the normal behavior for the S&P has been to consolidate and retreated after it traded above that level so it should not be surprised to see some consolidation patterns develop in this area.

Market internal has been deteriorated but downside momentum does not appear strong enough to generate widespread breakdowns.  For now, 3190 is the line in the sand.  A failure to hold above it indicated that long-term buying pressure has been exhausted and a much deeper pullback should be expected and we’re looking at 3100.

In summary, after the May massive rally, stocks digested their gains in a consolidation phase that is giving way to a pullback in the S&P.  Support is strong in the 3100 area.  While more backing and filling would not be a surprise, a close below that level would see a massive pickup in volatility.