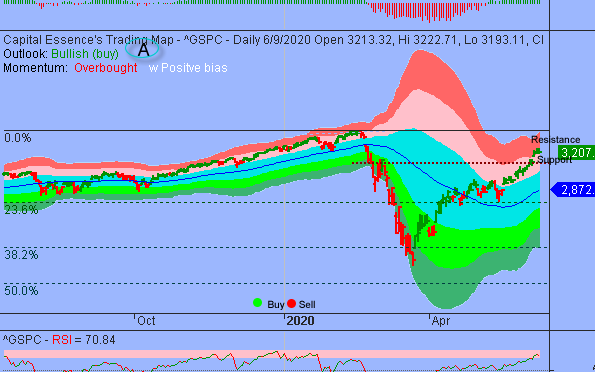 Stocks closed mix Tuesday as gains in technology and expectations for the Federal Reserve to reiterate its accommodative stance on monetary policy kept losses in the broader market in check.  The Dow Jones Industrial Average fell 1.09 percent to 27,272.30. The S&P dropped 0.78 percent to 3,207.18. The Nasdaq Composite rose 0.29 percent to 9,953.75.  The CBOE Volatility Index (VIX), widely considered the best gauge of fear in the market, jumped nearly 7 percent to 27.57.

Investor appetite for growth stocks returned with FAANG stocks catching a bid, led by Facebook (FB) and Apple (AAPL).    Apple jumped more than 3 percent as investors cheered a report suggesting the tech giant is set to begin production of iPhone 12 in July.  As such, the Technology Select Sector SPDR ETF (XLK) added 0.47 percent on the day and is up nearly 12 percent YTD, outperformed the S&P.  Now the question is what’s next?  Below is an update look at a trade in XLK. 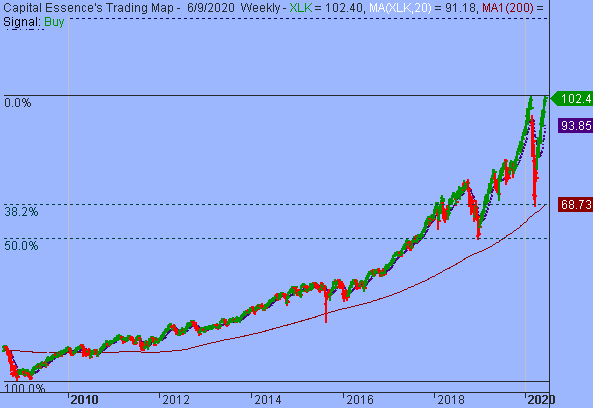 Our “U.S. Market Trading Map” painted XLK bars in green (buy) – see area ‘A’ in the chart.  XLK has been on a tear in recent months after the late February massive selloff found some solid footing near the 68 zone, or the 38.2% Fibonacci retracement of the 2009-2020 major upswing and the 4-year moving average. This week’s rally pushed the ETF up against the prior high set in February.  That level is significant in charting terms.  A close above it on a weekly closing basis signify a bullish breakout and upside reversal with upside target near 126, or the 127.2% Fibonacci extension.

XLK has support near 94.  Short-term traders could use that level as the logical level to measure risk against. 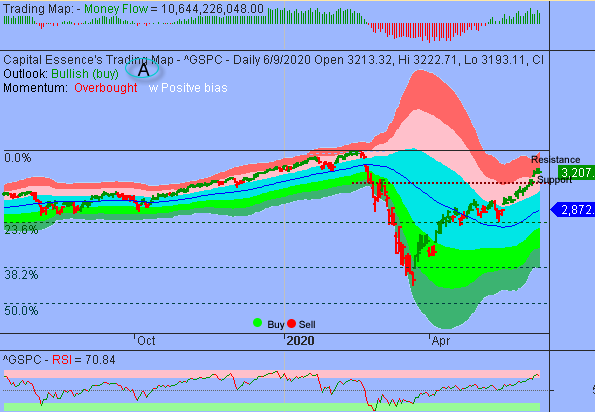 S&P retreated after recent rally ran out of steam near the lower boundary of the red band, or extreme overbought zone.  As mentioned, the rallies can continue for some times after the index climbed above the lower boundary of the red band, but in many cases the normal behavior for the S&P has been to consolidate and retreated after it traded above that level so there is a high probability that a significant consolidation pattern will again develop in this area.

While seemingly vulnerable to a further consolidations, Money Flow measure is still above the zero line, indicating a positive net demand for stocks.  This could help putting a short-term floor under the market.  Right now, the most important thing to watch is trading behaviors as the 3200 is tested as support.  That level was significant when the index climbed above it last week.  It’s now acting as strong support.  A failure to hold above it indicated that long-term buying pressure has been exhausted and a much deeper pullback should be expected.

In summary, S&P shifted to consolidation mode after last week’s rally ran out of steam near the lower boundary of the red band.  Over the next few days, it will be important to monitor the retreat and rebound behaviors to determine whether recent breakout is decisive.  We’d turn particular bearish if the S&P closes twice below 3200.