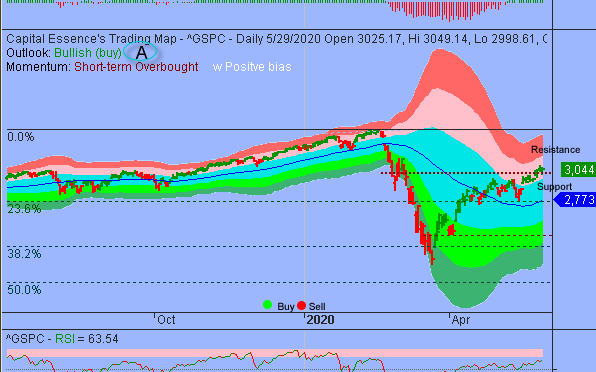 We’ve noted in the previous Market Outlook that: “S&P could signal an upward trajectory, depending on how it closes over the few days.  There is currently a test of support at the important sentiment 3000 zone.  If the prior resistance turns support then the next leg would be significantly higher and we’re looking at 3100.”  As anticipated, S&P rose slightly on Friday, erasing losses earlier in the session that saw the index briefly dipped below the closely watch 3000 mark, as traders breathed a sigh of relief after Donald Trump signaled no changes to the trade deal with China despite rising tensions.  For the day, the benchmark rose 0.4 percent to 3,044.31. The Dow Jones Industrial Average gave up less than 0.1 percent to 25,383.11.  The Nasdaq Composite jumped 1.2 percent to 9,489.87.  The CBOE Volatility Index (VIX), widely considered the best gauge of fear in the market, fell more than 3 percent to 27.51.

Chip stocks rallied following the news conference, Marvell Technologies and Nvidia were among the biggest gainers jumped 8.8 percent and 4.6 percent respectively.  As such, the iShares PHLX Semiconductor ETF (SOXX) rose 2.56 percent on the day and is up less than 1 percent YTD, outperformed the S&P.  Now the question is what’s next?  Below is an update look at a trade in SOXX.

Our “U.S. Market Trading Map” painted SOXX bars in green (buy) – see area ‘A’ in the chart. SOXX has been on a tear in recent weeks after the February massive selloff found some sold footing near the 175 zone, or the 38.2% Fibonacci retracement of the 2009-2020 major upswing and the 4-year moving average.  The March rally pushed the ETF up against the 250-270 zone, or the late February breakdown point. That level is significant in charting terms.  A close above 270 on a weekly closing basis signify a bullish breakout and upside reversal with initial target near 340. 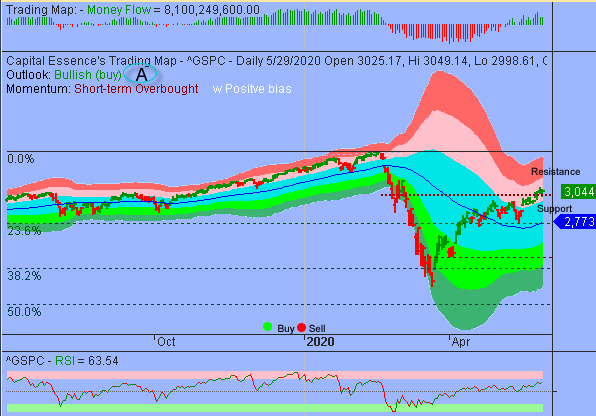 S&P rebounded nicely after the early selloff attempt found some solid footing near the closely watch 3000 zone.  This is a positive development however, let’s notice that momentum indicator is much closer to overbought zone than oversold following recent advance.  This may put a cap on the upside.  Money Flow measure hold firmly above the zero ling, indicating a positive net demand for stocks.  These elements increased the probability of some backings and fillings in the coming days.

For now, 3000 is the line in the sand.  That level is significant in charting terms.  It must holds on a closing basis to prevent a test of the trend channel moving average, currently at 2773.

In summary, after the May massive rally, stocks digested their gains in a consolidation phase that is giving way to a congestion in the S&P.  Support is strong in the 3000 area.  While more backing and filling would not be a surprise, a close below that level would see a massive pickup in volatility.