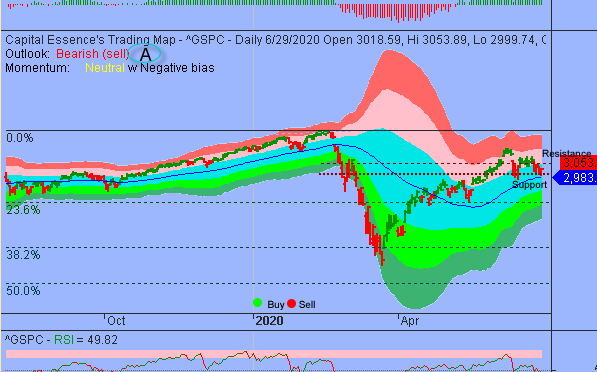 Stocks opened lower Monday amid growing concerns about the latest surge in coronavirus cases. The market however, managed to overcome the early weakness and closed higher as investors clung to hopes of a stimulus-backed economic rebound, while Boeing shares shot higher to help boost the blue-chip Dow.  The Dow Jones Industrial Average rose 2.3 percent to 25,595.80.  The S&P jumped 1.5 percent to 3,053.24 while the Nasdaq Composite gained 1.2 percent to 9,874.15.  The CBOE Volatility Index (VIX), widely considered the best gauge of fear in the market, fell more than 8 percent to 31.78.

Each of the 11 major S&P sectors was in positive territory, with industrial stocks leading gains after Boeing reported that certification flights for the Boeing 737 Max began Monday. The test is seen by investors as a critical step in Boeing’s worst-ever corporate crisis, which began in March 2019 after two crashes in five months killed 346 people.  As such, the Industrial Select Sector SPDR ETF (XLI) jumped 3.28 percent on the day but is down more than 16 percent YTD, underperformed the S&P.  Now the question is what’s next?  Below is an update look at a trade in XLI. 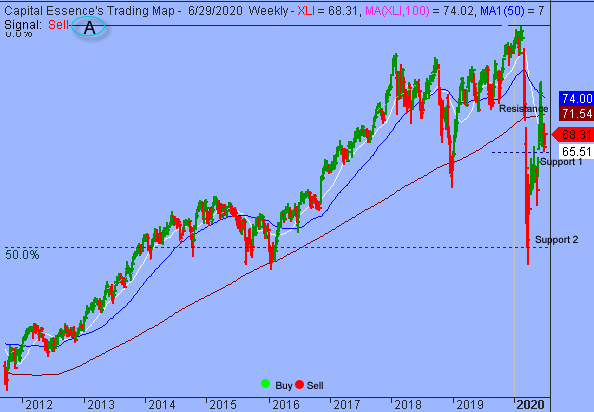 Our “U.S. Market Trading Map” painted XLI bars in red (sell) – see area ‘A’ in the chart.  Over the past few weeks, XLI has been trending lower in a short-term corrective mode after the late March rally ran out of steam near the 1-year moving average, a key technical level based on moving averages.  The mid-June correction is testing support at the 65 zone.  Monday’s bullish trading action suggested that the support would hold and increased the probability for a retest of the resistance near the 71.50 zone.  That level is significant in charting terms.  There is no particular reason to turn bullish until this area is eclipsed.

As for support, there is a strong band of support near the 65 zone.  A close below that level on a weekly closing basic will bring the March low into view.

XLI has resistance near 71.50.  Short-term traders could use that level as the logical level to measure risk against. 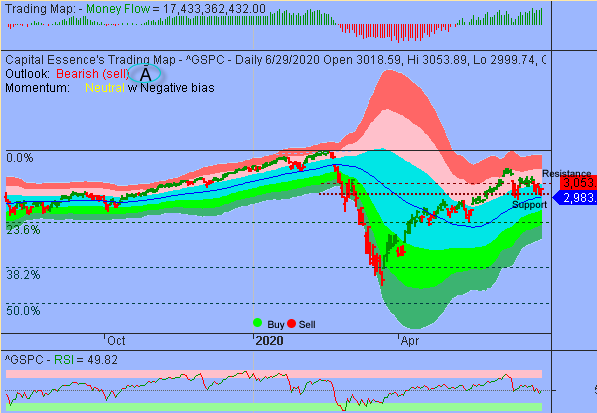 Once again, the S&P rebounded nicely after the early selloff attempt found some solid footing near the 3000 zone.  That level was significant when the index climbed above it late May.  It’s now acting as key support.  Market internal has been strengthening but upside momentum does not appeared strong enough to generate a widespread breakout. There is a high probability that market is in for a ‘range-bound’ trading environment.  Resistance is strong near the 3100 zone.  This could put a cap on the upside.  On the downside, support is strong between 3000 and 2980.  A close below that level is outright bearish and a much deeper pullback should be expected and we’re looking at 2900-2700.

In summary, there is a high probability that S&P is in for a ‘range-bound’ trading environment.  This is a rally and retreat environment. It is not a trending environment. Short-term traders can anticipate continued volatility with rapid up and down moves in the markets.