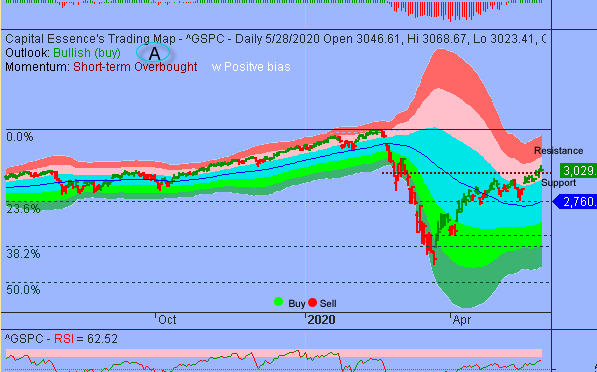 Good Morning, this is Capital Essence’s Market Outlook (the technical analysis of financial markets) for Friday May 29, 2020.

We’ve noted in the previous Market Outlook that: “short-term overbought conditions have returned on an intraday basis so some downside retracement cannot be ruled out this week.”  As anticipated, stocks reversed gains on Thursday as late selling hit stocks after Donald Trump said he would hold a news conference Friday on China that could address Beijing’s power grab in Hong Kong.  The Dow Jones Industrial Average fell 0.6 percent to 25,400.64.   The S&P slid 0.2 percent to 3,029.73. The Nasdaq Composite dropped 0.5 percent to 9,368.99.   The CBOE Volatility Index (VIX), widely considered the best gauge of fear in the market, rose more than 3 percent to 28.59.

Financials gave up some of their gains from earlier this week as investors took profits on bank stocks, with JPMorgan (JPM), Bank of America (BAC) and Citigroup (C) ending the day lower.  As such, the SPDR S&P Bank ETF (KBE) tumbled 3.77 percent on the day and is down 32 percent YTD, underperformed the S&P.  Now the question is what’s next?  Below is an update look at a trade in XLK. 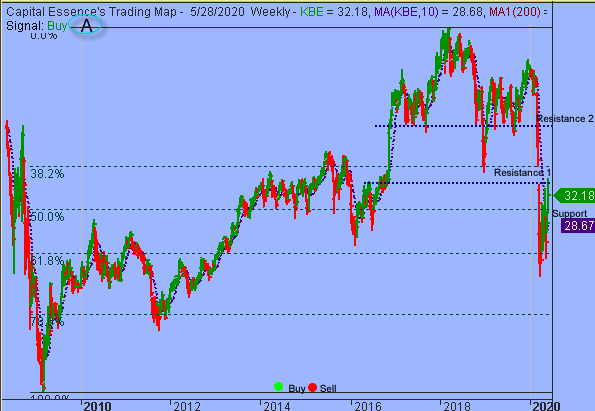 Our “U.S. Market Trading Map” painted KBE bars in green (buy) – see area ‘A’ in the chart. There is currently a test of resistance at the 33.-35 zone, or the 2016 bullish breakout point and the early March breakdown point.  Thursday’s selloff suggested that the resistance would hold.  While seemingly vulnerable to short-term consolidation, the near-term technical outlook remains positive as long as KBE holds above 28.  Resistance is strong near the 35 zone.  a sustain advance above that level will open up for a rapid advance toward the next level of resistance near the 40 zone.

KBE has support near 28.  Short-term traders could use that level as the logical level to measure risk against. 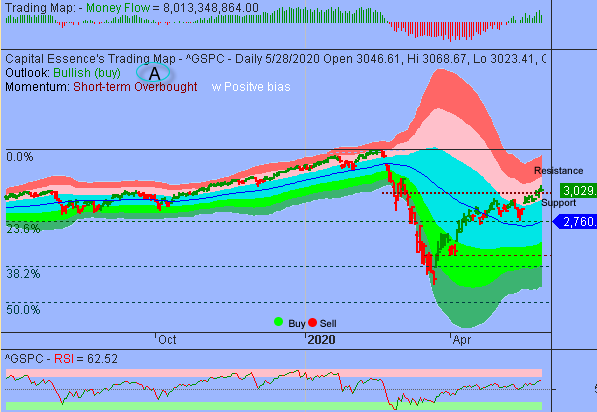 S&P retreated after the early rally attempt was met with a new wave of selling interest.  Momentum indicator shifted lower from near overbought zone, suggesting further short-term weakness likely.  This is a positive development, bringing the important sentiment 3000 zone into view.  That level is significant in charting terms.  It must holds on a closing basis to prevent a test of the trend channel moving average, currently at 2760.

In summary, S&P could signal an upward trajectory, depending on how it closes over the few days.  There is currently a test of support at the important sentiment 3000 zone.  If the prior resistance turns support then the next leg would be significantly higher and we’re looking at 3100.  A failure to hold above 3000 on a closing basis meanwhile, will open the flood gate toward the trend channel moving average.