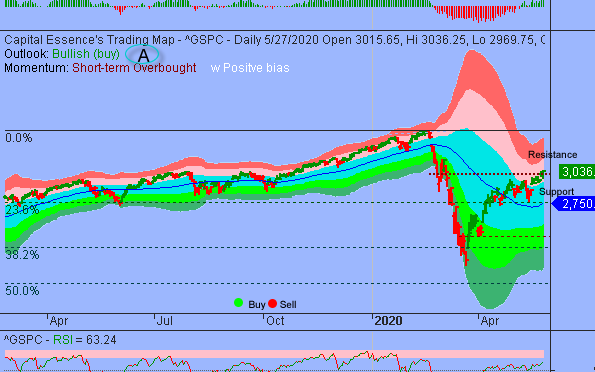 Good Morning, this is Capital Essence’s Market Outlook (the technical analysis of financial markets) for Thursday May 28, 2020.

We’ve noted in the previous Market Outlook that: “S&P rally attempt failed at formidable resistance.  There is a higher than average odds that the late day selloff will momentum but the bulls will continue to have the benefit of the doubts as long as S&P hold above 2967.”  As anticipated, the S&P rose 1.5 percent to 3,036.13 after briefly trading lower in early Wednesday session as investors grew more optimistic about the economy reopening.  The Dow Jones Industrial Average 2.2 percent to 25,548.27.  The Nasdaq Composite gained 0.8 percent to 9,412.36.  The CBOE Volatility Index (VIX), widely considered the best gauge of fear in the market, fell more than 1 percent to 27.63.

Tech stocks, which have led the rally from the lows seen in March, pared losses to end the day positive, with FAANG names rebounding from intraday lows.  Facebook (FB), Amazon.com (AMZN) and Google-parent Alphabet (GOOGL) ended the day just below the flatline, while Netflix (NFLX) and Apple (AAPL) ended up on the day.  As such, the Technology Select Sector SPDR ETF (XLK) added 0.57 percent on the day but is up more than 5 percent YTD, outperformed the S&P.  Now the question is what’s next?  Below is an update look at a trade in XLK.

Our “U.S. Market Trading Map” painted XLK bars in green (buy) – see area ‘A’ in the chart. After dropping about 30 percent from its February high, near 103, and met the anticipated support at the 38.2% Fibonacci retracement of the 2009-2020 major upswing, XLK has retraced most of the February massive lost.  This is a positive development, suggesting that the entire downtrend will eventually be retraced.  The next resistance is around the 100-103 zone.  A sustain advance above that level could rapidly push prices up to the 126 zone, or the 127.2% Fibonacci extension. 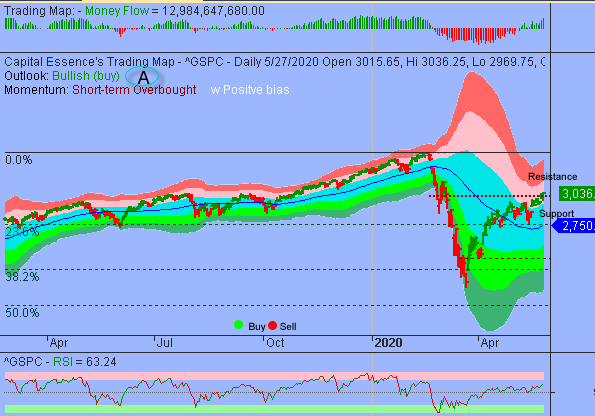 Key technical development in Wednesday session was a clear break above the closely watch 3000 zone.  Money Flow measure had trended higher from above the zero line, indicating that net demand for stocks was strong.  This suggests that the index may extend the uptrend that dominated the market since late March.  A consecutive close above 3000 will confirm this.  The next resistance level for the S&P is around 3080 while the psychological resistance is at 3100.

Our “US Market ETF Trading Map” however, had warned that the market is short-term overbought following recent advance.  While this is normal during a long-term uptrend, it has usually marked a short-term pause.  So, we’d be cautious against taking large position at this stage of the rally.

As for support, S&P must holds above 2965 on a closing basis to prevent a test of the more important support at the 2900 zone.  That level is significant in charting terms a failure to hold above it will turn the short-term trend down and a much deeper selloff should be expected.

In summary, short-term overbought conditions have returned on an intraday basis so some downside retracement cannot be ruled out this week. However, the near-term technical outlook remains positive, suggesting that the path with least resistance remains higher as long as the S&P holds above 3000.