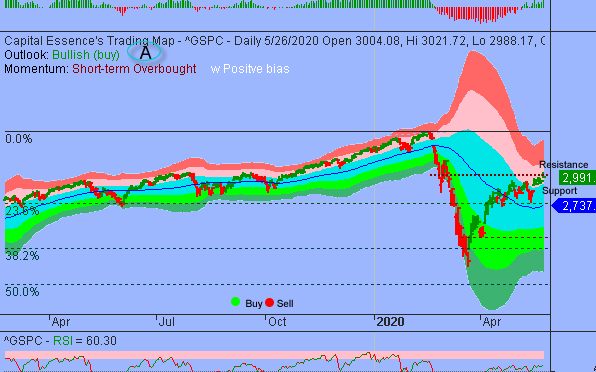 Good Morning, this is Capital Essence’s Market Outlook (the technical analysis of financial markets) for Wednesday May 27, 2020.

We’ve noted in the previous Market Outlook that: “although short-term overbought condition is keeping buyers at bay, S&P’s 3000 continues to act as price magnet.  Short-term traders can anticipate increase short-term volatility with rapid up and down moves in the market.”  As anticipated, stocks surged on Tuesday, sending the S&P above 3000 for most of the, but fell back below that level in the final minutes of trading.  For the day, the bench mark gauge added 1.2 percent to 2,991.77.   The Dow Jones Industrial Average gained 2.2 percent to 24,995.11.  The Nasdaq Composite lagged, rising just 0.2 percent to 9,340.22.  The CBOE Volatility Index (VIX), widely considered the best gauge of fear in the market, fell less than 1 percent to 28.01.

Efforts to reopen states nationwide has many expecting that domestic travel will pick and support battered airlines. Southwest Airlines (LUV), American Airlines (AAL) was and United Airlines (UAL) all soared more than 12 percent.  As such, the iShares Transportation Average ETF (IYT) jumped 5.01 percent on the day but is down more than 19 percent YTD, underperformed the S&P.  Now the question is what’s next?  Below is an update look at a trade in IYT. 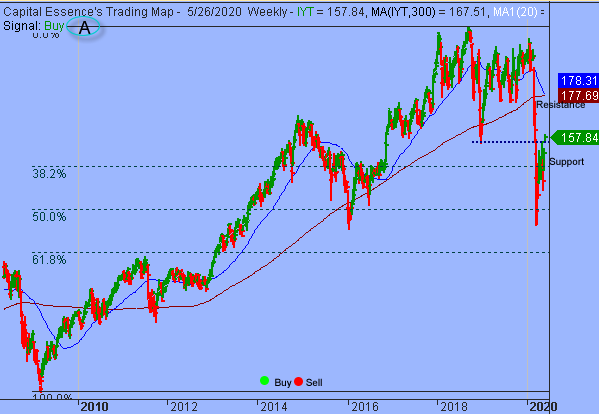 Our “U.S. Market Trading Map” painted IYT bars in green (buy) – see area ‘A’ in the chart. XRT rebounded nicely after the early May selloff found some solid footing near the late March breakout point. This week’s rally added on to last week’s gain, pushed the ETF above the closely watch 155 zone, of the early March breakdown point.  This is a positive development, opened up for a retest of the 4-year moving average, around 177.

IYT has support near 142.  Short-term traders could use that level as the logical level to measure risk against. 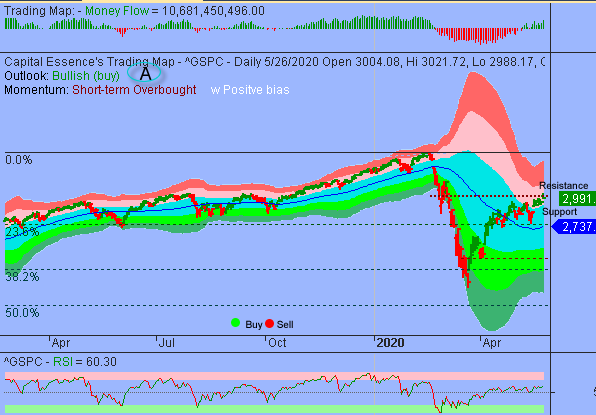 As expected, the S&P moved up to test the closely watch 3000 zone in early Tuesday session but failed to close above it.  This is a short-term negative development, suggested that most of the potential buyers at this level had already placed their bets.  The next batch of buyers typically sits at a much lower level.  While more backing and filling would not be a surprise, a failure to hold above 2967 would see a pickup in volatility and a test of the more important support at the 2900 zone should be expected.

For now, the important sentiment 3000 mark continues to act as price magnet.  As mentioned, while the overall technical backdrop is positive, the S&P remains vulnerable to downside pressure until it hurdles and sustain above 3000.  There is no reason to turn particularly bullish until this zone is eclipsed.  Consecutive close above 3000 will trigger a long-term buy signal and a retest of the February high should follow shortly.

As for support, S&P must holds above 2967 on a closing basis to prevent a test of the more important support at the 2900 zone.  That level is significant in charting terms a failure to hold above it will turn the short-term trend down and a much deeper selloff should be expected.

In summary, S&P rally attempt failed at formidable resistance.  There is a higher than average odds that the late day selloff will momentum but the bulls will continue to have the benefit of the doubts as long as S&P hold above 2967.  A failure to hold above that level, meanwhile, indicated that most of the potential buyers at this level had already placed their bets.  The next batch of buyers typically sits at a much lower level and we’re looking at 2900.