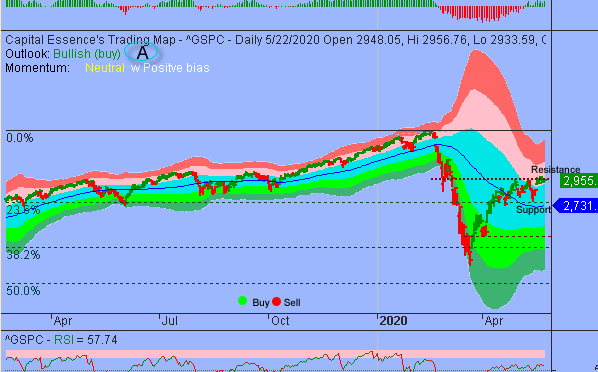 Good Morning, this is Capital Essence’s Market Outlook (the technical analysis of financial markets) for Tuesday May 26, 2020.

Stocks closed mix Friday as investors weighed up rising U.S.-China tensions against ongoing efforts to lift economically damaging restrictions nationwide.  The S&P rose 0.2 percent to 2,955.45 while the Dow Jones Industrial Average slipped less than 0.1 percent to 24,465.16. The Nasdaq Composite outperformed, rose 0.4 percent to 9,324.59.  The CBOE Volatility Index (VIX), widely considered the best gauge of fear in the market, fell more than 4 percent to 28.16.

Retailers such as TJX and Gap were among the best-performing stocks this week, bolstered by optimism over states reopening their economies. TJX rallied more than 13 percent for the week while Gap advanced 8 percent.  As such, the SPDR S&P Retail ETF (XRT) rose 0.41 percent on the day but is down nearly 15 percent YTD, underperformed the S&P.  Now the question is what’s next?  Below is an update look at a trade in XRT. 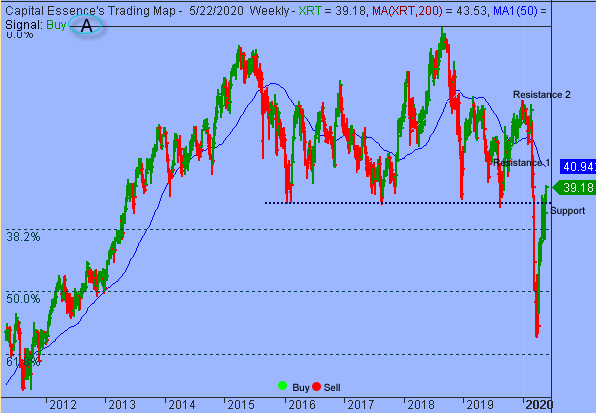 Our “U.S. Market Trading Map” painted XRT bars in green (buy) – see area ‘A’ in the chart. Over the past few weeks, XRT has been basing sideways after the early April rally ran out of steam near the closely watch 38 zone.  That level roughly corresponds with the multi-years lows set in 2016-2019.  It was significant when the ETF fell below it in early 2020.  Last week’s rally pushed the ETF above 38, signify a bullish breakout and upside reversal.  This is a positive development.  A consecutive close above 38 will confirm the bullish signal and setting the stage for a test of the more important resistance at the 1-year moving average, near 41.  If the bulls can hurdle and sistain above that level then a retest of the early 2020 high would be easier to achieve.

XRT has support near 38.  Short-term traders could use that level as the logical level to measure risk against. 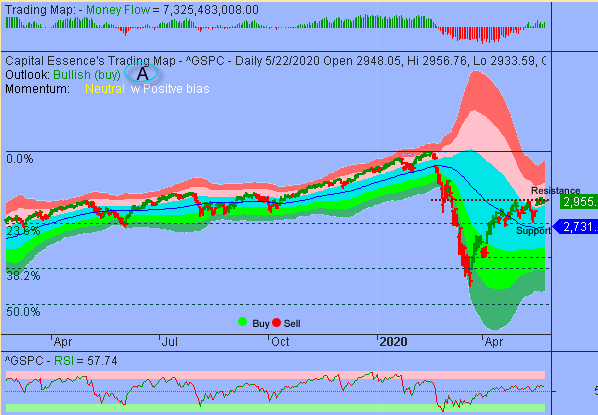 The big picture remains the same. The S&P continues drifting higher after the mid-May pullback found some solid footing near the trend channel moving average.  Money Flow measure holds above the zero line, indicating a positive net demand for stocks.  This is a positive development but let’s notice that with momentum indicator is much closer to overbought than oversold following recent advance.  So it should not be surprised to see some backing and fillings in the coming days.

On the upside, the important sentiment 3000 mark continues to act as price magnet.  As mentioned, while the overall technical backdrop is positive, the S&P remains vulnerable to downside pressure until it breaks above 3000.  There is no reason to turn particularly bullish until this zone is eclipsed.  A sustain advance above 3000 will trigger a long-term buy signal and a retest of the February high should follow shortly.

As for support, S&P must holds above 2955 on a closing basis to prevent a test of the more important support at the trend channel moving average, currently at 2731.  That level is significant in charting terms.  If provided strong supporting levels and launching bases for the April-May advance.  So it should not be surprising to see the index draw in buyers in any pullback to that area.

In summary, although short-term overbought condition is keeping buyers at bay, S&P’s 3000 continues to act as price magnet.  Short-term traders can anticipate increase short-term volatility with rapid up and down moves in the market.