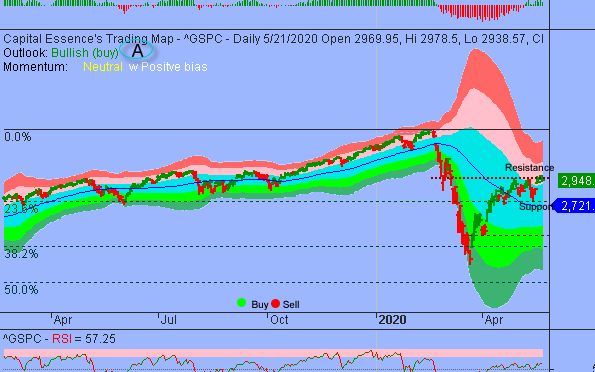 Good Morning, this is Capital Essence’s Market Outlook (the technical analysis of financial markets) for Friday May 22, 2020.

We’ve noted in the previous Market Outlook that: “the daily chart of the S&P is painting a bullish picture with series of higher highs and lower lows.  However, while the overall technical backdrop remains supportive of further advance, the S&P remains vulnerable to downside pressure until it breaks above 3000.  This area has been tested several times over the past weeks. There is no reason to turn particularly bullish until this zone is eclipsed.”  S&P closed lower Thursday, dropped 0.8 percent to 2,948.51, as Wall Street digested a strong rally this week along with the latest weekly jobless claims data and rising tensions between China and the U.S.  The Dow Jones Industrial Average gave up 0.4 percent to 24,474.12 while the Nasdaq Composite fell nearly 1 percent to 9,284.88.  The CBOE Volatility Index (VIX), widely considered the best gauge of fear in the market, jumped more than 5 percent to 29.53.

Energy stocks led the market lower Thursday even as oil prices ended the day up, as investors digested bearish news from companies in the sector.  Occidental Petroleum (OXY), Marathon Petroleum (MPC) and National Oilwell Varco (NOV) were among the biggest losers, with the latter down more than 6 percent after announcing it would scrap its dividend to conserve cash.  As such, the Energy Select Sector SPDR ETF (XLE) fell 1.60 percent on the day and is down more than 35 percent YTD, underperformed the S&P.  Now the question is what’s next?  Below is an update look at a trade in XLE. 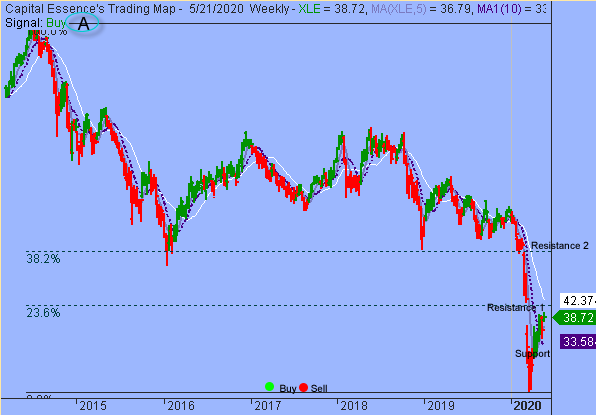 Our “U.S. Market Trading Map” painted XLE bars in green (buy) – see area ‘A’ in the chart. Over the past few weeks, XLE has been basing sideways after the late March rally ran out of steam just below the 23.6% Fibonacci retracement of the 2014-2020 major downswing.  That level roughly corresponds with the early March bearish breakaway gap.  The fact that the ETF managed to hold on to most the March gains is pretty impressive. It’s suggested that the XLE might take a new leg higher as soon as it works off excessive optimism.  There is a strong support near the 33 level.  If it can hold above that level then a climb above 42 would be easier to achieve.  That level is significant in charting terms.  A sustain advance above that level will bring the early 2020 breakdown points, around 50, into view.

XLE has support near 33.  Short-term traders could use that level as the logical level to measure risk against. 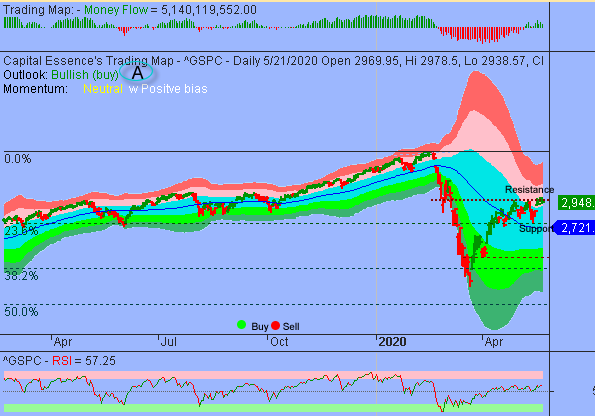 As expected, S&P retreated after the rally attempt ran out of steam just below the important sentiment 3000 mark.  That level was tested several times over the past months.  Money Flow measure had trended lower from above the zero line, indicating that traders are hesitated to buy at current price level.  Additionally, the market is much closer to overbought than oversold territory following recent advance.  These elements increased the probability for a retest of support around the 2890-2900 zone.  That level must hold on a closing basis to prevent a test of the more important support at the trend channel moving average, currently at 2721.  That level is significant in charting terms.  If provided strong supporting levels and launching bases for the April-May advance.  So it should not be surprising to see the index draw in buyers in any pullback to the low 2700s.

As mentioned, the 3000 zone represents key price level.  There is no reason to turn particularly bullish until this zone is eclipsed.  With that said, while the overall technical backdrop is positive, the S&P remains vulnerable to downside pressure until it breaks above 3000.  A sustain advance above that level will trigger a long-term buy signal and a retest of the February high should follow shortly.

In summary, S&P recovery rally attempt failed near formidable resistance.  The index has minor support near 2890. If it fails to hold above it this week, then the next stop will be the May low of 2766 with the possibility of a brief breakdown below that level.