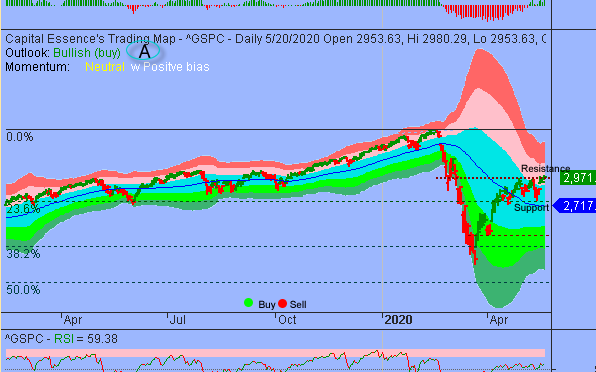 Good Morning, this is Capital Essence’s Market Outlook (the technical analysis of financial markets) for Thursday May 21, 2020.

Wall Street ended strongly on Wednesday as investors continued to cheer efforts to reopen the economy.  The Dow Jones Industrial Average rose 1.5 percent to 24,575.90. The S&P advanced 1.7 percent to 2,971.61. The Nasdaq Composite rallied 2.1 percent to 9,375.78.  The CBOE Volatility Index (VIX), widely considered the best gauge of fear in the market, fell more than 8 percent to 27.99.

With all U.S. States partially reopened, traders upped their bets on big tech stocks, with Amazon and Facebook closed at record highs.  Facebook’s gains came as Wall Street cheered the company’s new e-commerce, Facebook Shops, while Amazon continues to benefit from consumers ordering online.  As such, the Technology Select Sector SPDR ETF (XLK) jumped 2.19 percent on the day and is up more than 6 percent YTD, outperformed the S&P.  Now the question is what’s next?  Below is an update look at a trade in XLK. 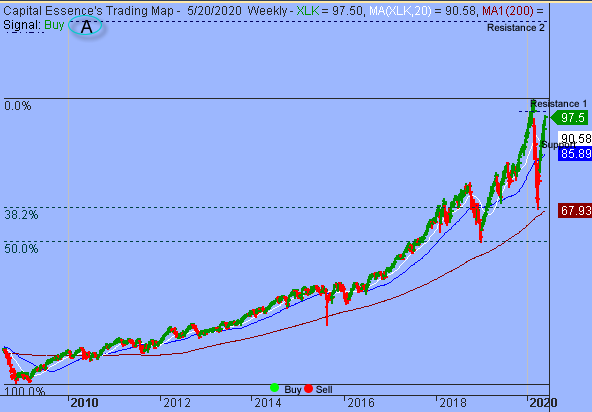 Our “U.S. Market Trading Map” painted XLK bars in green (buy) – see area ‘A’ in the chart. XLK has been on a tear in recent months after the late February selloff found some solid footing near the 38.2% Fibonacci retracement of the 2009-2020 major upswing. This week’s rally is pushing the ETF closer to the closely watch 99-103 zone, or the February’ breakdown point.  That level is significant in charting terms.  A sustain advance above 103 will open up for a rapid advance toward the 127.2% Fibonacci extension, around 126. 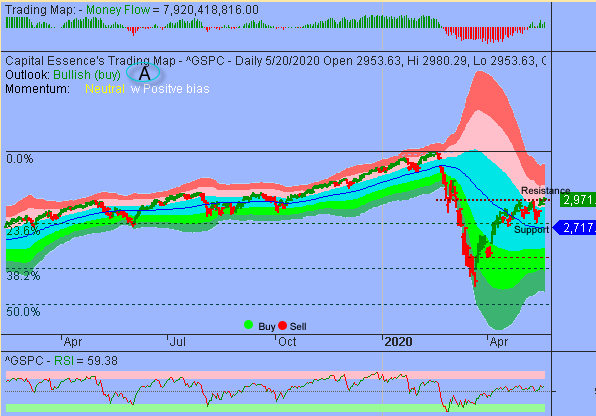 Looking at the daily chart of the S&P, we can see that the index is printing a bullish higher highs and lower lows trading pattern going back to late March.  Market internal has strengthened following recent rally.   Nonetheless, resistance is strong near the early March breakdown point, around 3000.  This area has been tested several times over the past weeks. There is no reason to turn particularly bullish until this zone is eclipsed.  With that said, while the overall technical backdrop remains supportive of further advance, the S&P remains vulnerable to downside pressure until it breaks above 3000.  A sustain advance above that level will trigger a long-term buy signal and a retest of the February high should follow shortly.  On the downside, it the S&P can’t clear that hurdle and falls below the May low of 2766, then it’ll break the bullish higher highs and lower lows trading pattern and increase the probability for a retest of the March low.

In summary, the daily chart of the S&P is painting a bullish picture with series of higher highs and lower lows.  However, while the overall technical backdrop remains supportive of further advance, the S&P remains vulnerable to downside pressure until it breaks above 3000.  This area has been tested several times over the past weeks. There is no reason to turn particularly bullish until this zone is eclipsed.