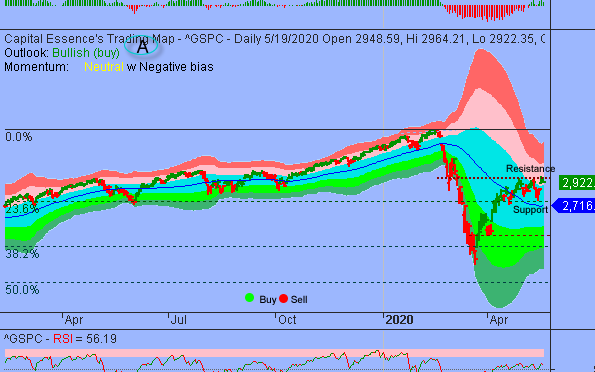 Good Morning, this is Capital Essence’s Market Outlook (the technical analysis of financial markets) for Wednesday May 20, 2020.

We’ve noted in the previous Market Outlook that: “S&P is ticking ever closer to 3000, a level it has not breached since the market broke down in February.  While the overall technical backdrops remains bullish, upside momentum does not appeared strong enough to generate widespread breakouts.  So S&P may have to take a breather before it gets there.  Some aggressive traders might use 3000 like a magnet to sell against.”  As anticipated, S&P closed lower Tuesday, slid 1.1 percent to 2,922.91, after the early rally attempt was met with a new wave of selling interest.  The Dow Jones Industrial Average dropped 1.6 percent to 24,206.86 while the Nasdaq Composite lost 0.5 percent to 9,185.10.  The CBOE Volatility Index (VIX), widely considered the best gauge of fear in the market, rose more than 4 percent to 30.53.

Healthcare stocks came under pressure, paced by a fall in Moderna (MRNA) after a STAT News report cooled some of the optimism surrounding the company’s potential Covid-19 vaccine. The company also announced a secondary stock offering that would raise more than $1 billion.   As such, the Health Care Select Sector SPDR ETF (XLV) fell 1.20 percent on the day and is down about 2 percent YTD, outperformed the S&P.  Now the question is what’s next?  Below is an update look at a trade in XLV. 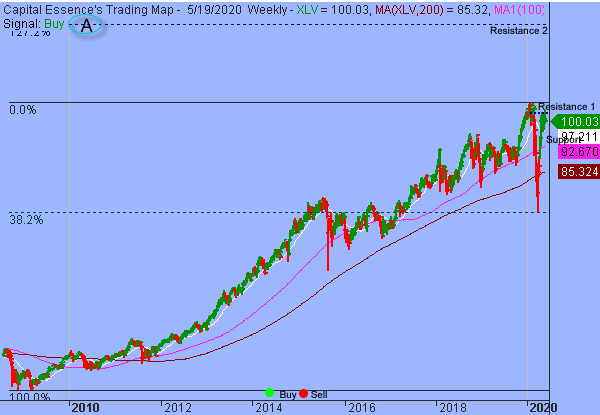 Our “U.S. Market Trading Map” painted XLV bars in green (buy) – see area ‘A’ in the chart. Over the past few weeks, XLV has been basing sideways after the late March rally ran into resistance near late February breakdown point.  Support is strong near the 95 zone.  Should the ETF manage to hold above that level then a retest of the February high should be easier to be achieved.  Over the next few weeks, traders should monitor trading behavior near the 100-105 zone.  A sustain advance above that level will open up for a rapid advance toward the 127.2% Fibonacci extension, just below 130.

XLV has support near 95.  Short-term traders could use that level as the logical level to measure risk against. 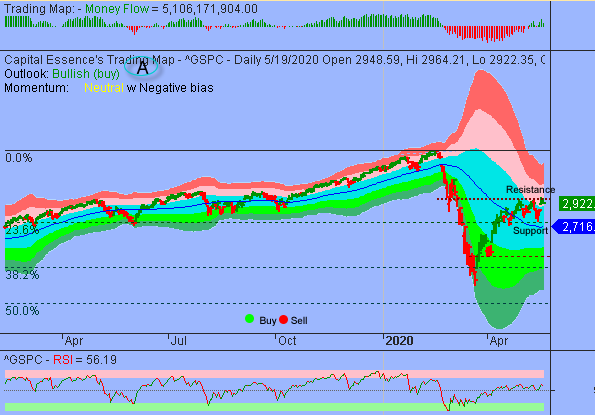 As expected, the S&P retreated after the early rally attempt ran out of steam just below the closely watch 3000 mark.  That level is significant in charting terms.  If it manages to move pass 3000 then it’ll break the sideways trading pattern, which would imply more demand than we’ve seen in the late April and early May rallies.  Market internal remains supportive but upside momentum does not appeared strong enough to generate widespread breakouts. While more backing and filling would not be a surprise, the longer the index stays below that level, the more vulnerable it is to lower prices.  Monday’s bullish breakaway gap, around 2870, represents key support.  A failure to hold above that level will bring the trend channel moving average, just above 2700 into view.

In summary, market internal remains supportive as S&P struggled to get pass 3000.  The longer the index stays below that level, the more vulnerable it is to lower prices. Initial support is defined by Monday’s bullish breakaway gap, around 2870.  If it closes below that level, the next leg is likely lower, and we’re looking at the low 2700, based on the trend channel moving average.