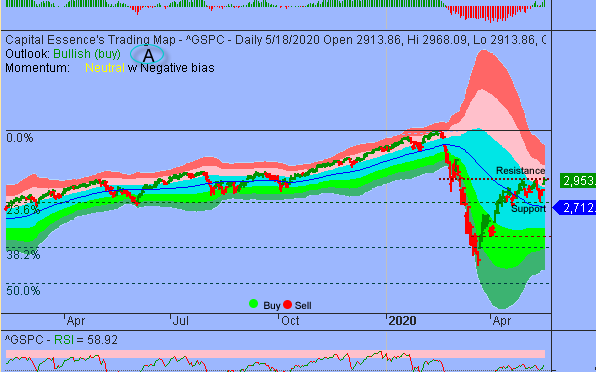 Good Morning, this is Capital Essence’s Market Outlook (the technical analysis of financial markets) for Tuesday May 19, 2020.

We’ve noted in the previous Market Outlook that: “the S&P has been sideways in a range for about a month after reaching an interim low in March 2020.  Market internal has been strengthened after recent pullback found support near lower boundary of its short-term trading range but upside momentum does not appear strong enough to generate widespread breakouts.  Near-term, there is a high probability of a period of consolidation activity between S&P’s 2700 and 3000 that may last several weeks if not months.  This consolidation band provides a rally and retreat trading environment for traders.”  As anticipated, equity market logged its best day in over a month on Monday as news from a Moderna (MRNA) trial stoked optimism about a potential coronavirus vaccine.  The S&P traded as high as 2968 before gave back some of the gains to close at 2,953.91, up 3.2 percent.  The Dow Jones Industrial Average jumped 3.9 percent to 24,597.37while the Nasdaq Composite advanced 2.4 percent to 9,234.83. The CBOE Volatility Index (VIX), widely considered the best gauge of fear in the market, fell more than 8 percent to 29.30.

Homebuilders jumped follow a better-than-expected housing data.  The NAHB Housing Market Index rose to a reading of 37 in May, topping economists’ forecasts of 35.  As such, the SPDR S&P Homebuilders ETF (XHB) surged 7.94 percent on the day but is down more than 14 percent YTD, underperformed the S&P.  Now the question is what’s next?  Below is an update look at a trade in XHB.

Our “U.S. Market Trading Map” painted XHB bars in green (buy) – see area ‘A’ in the chart. Over the past few weeks, XHB has been basing sideways using the 38.2% Fibonacci retracement of the 2009-2018 major upswing as support after the late March recovery rally ran into resistance just below the 4-year moving average, a key technical level based on moving averages.  That level roughly corresponds with the late 2018 breakdown point, around 39.  It’s significant in charting terms.  If XHB could climb above 39 then a retest of the early 2020 high would be easier to achieve.

XHB has support near 33.  Short-term traders could use that level as the logical level to measure risk against. 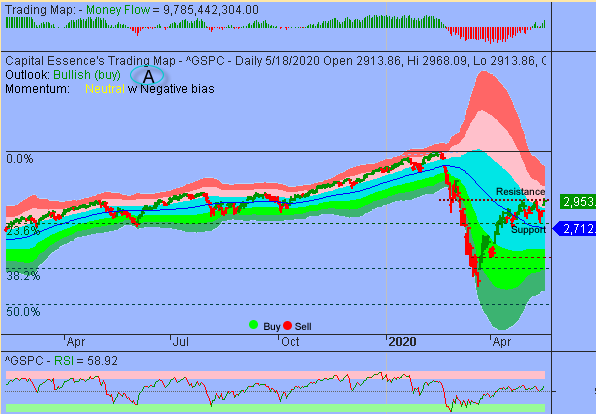 Looking at the one-year daily chart of the S&P we can see that the index has been sideways in a range for about a month after reaching an interim low in March 2020.  Monday’s rally pushed the S&P up against the upper boundary of its sideways trading pattern.  That level is significant in charting terms.  If it manages to move pass 3000 then it’ll break the sideways trading pattern, which would imply more demand than we’ve seen in the late April and early May rallies.  Market internal has strengthened but upside momentum does not appeared strong enough to generate widespread breakouts. These elements suggested that the S&P may have to take a breather. Some aggressive traders might use 3000 like a magnet to sell against, but as long as the S&P holds above 2860, the path with least resistance remains higher.  Perhaps the positive Money Flow measure is the best illustration of the bull’s case.

In summary, S&P is ticking ever closer to 3000, a level it has not breached since the market broke down in February.  While the overall technical backdrops remains bullish, upside momentum does not appeared strong enough to generate widespread breakouts.  So S&P may have to take a breather before it gets there.  Some aggressive traders might use 3000 like a magnet to sell against, but as long as the index holds above 2860, the path with least resistance remains higher.