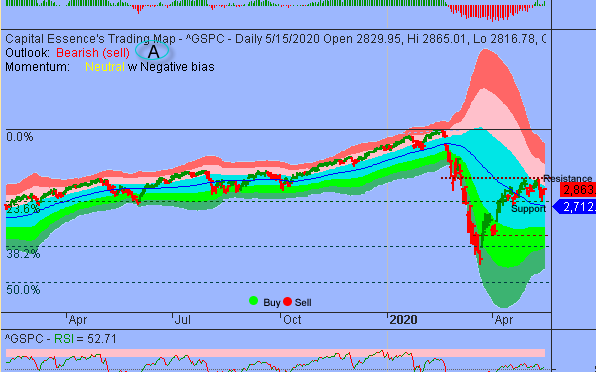 Good Morning, this is Capital Essence’s Market Outlook (the technical analysis of financial markets) for Monday May 18, 2020.

We’ve noted in the previous Market Outlook that: “we wouldn’t look too much into recent trading action as because it keeps the S&P within its short-term consolidation phase. Resistance is strong in the 2950-3000 zone and upside momentum does not appear strong enough to generate a decisive breakout.”  As anticipated, S&P closed slightly higher Friday but couldn’t avert its worst weekly slump since March as investors had to contend with weaker economic data and rising U.S-China trade tensions.  For the day, the bench mark gauge added 0.39 percent to 2,863.70 while the Nasdaq Composite climbed 0.79 percent to 9,014.56.  The Dow Jones Industrial Average rose 0.25 percent to 23,685.42.  The CBOE Volatility Index (VIX), widely considered the best gauge of fear in the market, fell more than 2 percent to 31.89.

Retail stocks attracted strong buying interest despite a record decline in monthly retail sales.  The Commerce Department said on Friday that retail sales fell 16.4 percent last month, worse than the 12 percent decline expected.  As such, the SPDR S&P Retail ETF (XRT) climbed 2.02 percent on the day but is down nearly 20 percent YTD, underperformed the S&P.  Now the question is what’s next?  Below is an update look at a trade in XRT. 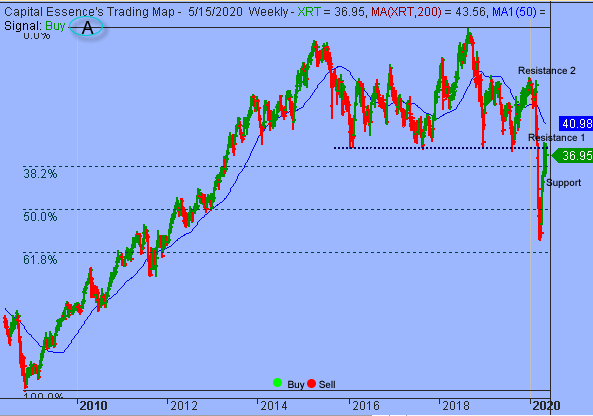 Our “U.S. Market Trading Map” painted XRT bars in green (buy) – see area ‘A’ in the chart. Over the past few weeks, XRT has been basing sideways using the 38.2% Fibonacci retracement of the 2009-2018 major upswing as support after the April recovery rally ran into resistance are the March breakdown point, near the 38 zone.  The fact that XRT managed to hold on to most of the April gains despite the overbought conditions is pretty bullish.  It’s suggested that the ETF could head toward the early 2020 high as soon as it works off excessive bullishness.   A close above 38.50 on a weekly closing basis will confirm this and trigger acceleration toward the 46 zone.

XRT has support near 35.  Short-term traders could use that level as the logical level to measure risk against. 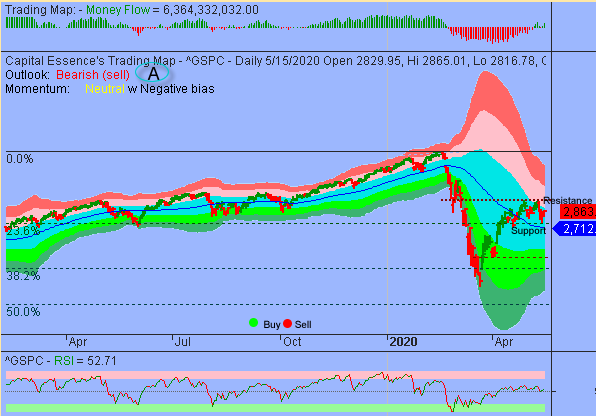 S&P moved up to test resistance at the lower boundary of the pink band after recent pullback found some solid footing near the closely watch 2750 zone. Money Flow measure trended higher from above the zero line, indicating a positive net demand for stocks.  This is a positive development, increased the probability for a retest of the upper boundary of its 1-month sideways trading range, just below 3000.  This area was tested several times over the past weeks.  There is no particular reason to turn bullish until this area is eclipsed.

As for support, there is a strong band of support between the 2750-2710 zones. Expect the S&P to draw in buyers in any pullback toward this area.

In summary, the S&P has been sideways in a range for about a month after reaching an interim low in March 2020.  Market internal has been strengthened after recent pullback found support near lower boundary of its short-term trading range but upside momentum does not appear strong enough to generate widespread breakouts.  Near-term, there is a high probability of a period of consolidation activity between S&P’s 2700 and 3000 that may last several weeks if not months.  This consolidation band provides a rally and retreat trading environment for traders.