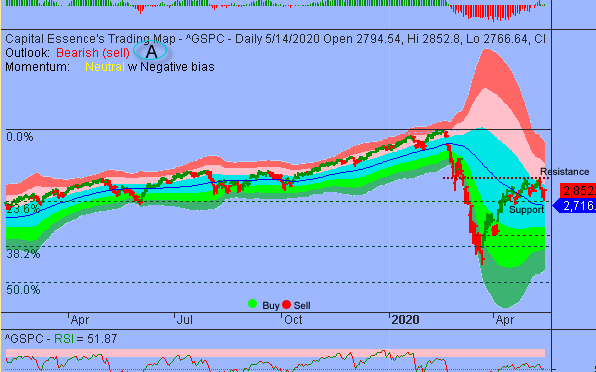 Good Morning, this is Capital Essence’s Market Outlook (the technical analysis of financial markets) for Friday May 15, 2020.

We’ve noted in the previous Market Outlook that: “Wednesday’s downside follow-through confirmed Tuesday’s bearish signal.  While seemingly vulnerable to further short-term weakness, support is strong near the trend channel moving average, currently at 2720. That level is too big and too important to fall quickly.  It could help minimize downside follow-through and widespread breakdowns.”  As anticipated, S&P was down over 1 percent to start off Thursday session, traded as low as 2,766 before buyers stepped in and pushed prices higher.  For the day, the bench mark gauge climbed 1.15 percent to 2,852.50 while the Nasdaq Composite added 0.9 percent to 8,943.72.  The Dow Jones Industrial Average rose 1.6 percent to 23,625.34.  The CBOE Volatility Index (VIX), widely considered the best gauge of fear in the market, fell nearly 8 percent to 32.61.

Financials stocks made an impressive comeback on Thursday amid speculation that Wells Fargo (WFC) could merge with Goldman Sachs (GS).  WFC jumped nearly 7 percent while JPMorgan Chase (JPM) and Bank of America (BAC) closed more than 4 percent higher.  As such, the SPDR S&P Bank ETF (KBE) climbed 3.57 percent on the day but is down nearly 43 percent YTD, underperformed the S&P.  Now the question is what’s next?  Below is an update look at a trade in KBE. 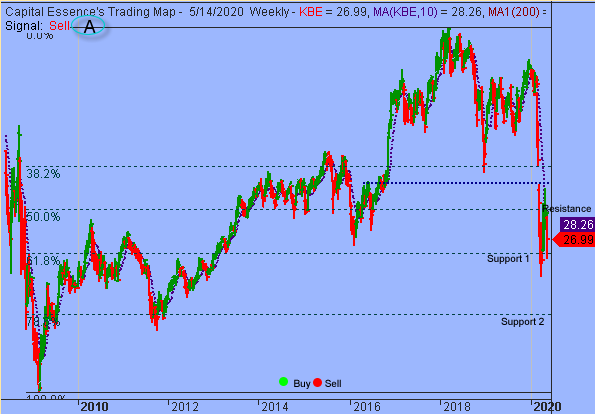 Our “U.S. Market Trading Map” painted KBE bars in red (sell) – see area ‘A’ in the chart. Over the past few weeks, KBE has been trending lower after the March oversold rally ran out of steam near the late 2016 breakout point.  This week’s selloff tested support at eh 61.8% Fibonacci retracement of the 2009-2018 major upswing, around 25.30. That level is significant in charting terms.  It was tested in late March and needed to hold on a weekly closing basis to prevent a test of the secondary support at the 78.6% Fibonacci retracement near 18.

KBE has resistance near 28.30.  Short-term traders could use that level as the logical level to measure risk against. 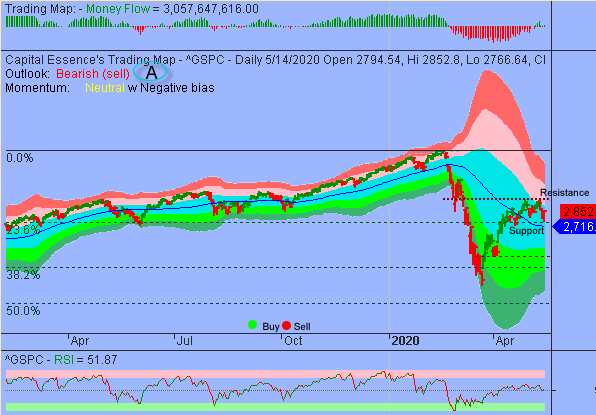 S&P rebounded nicely after the early selloff attempt found some solid footing near the closely watch 2750 zone.  That level was tested several times since the index reached an interim low in late March.  Money Flow measure turned positive after falling below the zero line on Wednesday but upside momentum does not appear strong enough to generate a decisive breakout.  With that said we wouldn’t read too much into Thursday trading action as it keeps the S&P within its short-term consolidation phase.

In summary, we wouldn’t look too much into recent trading action as because it keeps the S&P within its short-term consolidation phase. Resistance is strong in the 2950-3000 zone and upside momentum does not appear strong enough to generate a decisive breakout.