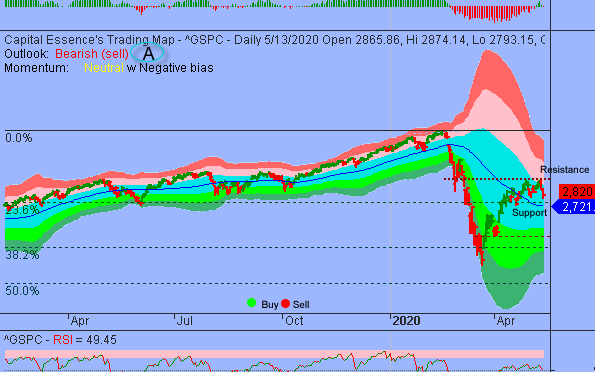 Good Morning, this is Capital Essence’s Market Outlook (the technical analysis of financial markets) for Thursday May 14, 2020.

We’ve noted in the previous Market Outlook that: “market internal is deteriorating as S&P struggled to get pass 3000.  The index could signal a downward trajectory, depending on how it closes over the next few days.  Initial support is defined by April rising trend line, around 2850.  If it closes below that level, the next leg is likely lower, and we’re looking at the low 2725, based on the trend channel moving average.”  As anticipated, stocks tumbled Wednesday as Federal Reserve Chairman Jay Powell’s stark warning about the state of coronavirus-ravaged economy prompted investors to pull their bullish bets.  S&P undercut 2850 and traded as low as 2,793 before buyers stepped in and pushed prices off the intraday low.  For the day, the bench mark gauge fell 1.8 percent to 2,820 while the Nasdaq Composite fell 1.6 percent to 8,863.17.  The Dow Jones Industrial Average dropped 2.1 percent to 23,247.97.  The CBOE Volatility Index (VIX), widely considered the best gauge of fear in the market, jumped nearly 7 percent to 35.28.

Fears of a slow recovery sent oil prices lower despite the first decline in U.S. crude inventories since January.  U.S. crude stockpiles fell by 745,000 barrels, according to the EIA, compared with analysts’ expectations of a 4.1 million-barrel rise.  West Texas Intermediate crude shed 49 cents, or 1.9 percent, to settle at $25.29 per barrel.  As such, the Energy Select Sector SPDR ETF (XLE) dropped 4.54 percent on the day and is down more than 40 percent YTD, underperformed the S&P.  Now the question is what’s next?  Below is an update look at a trade in XLE. 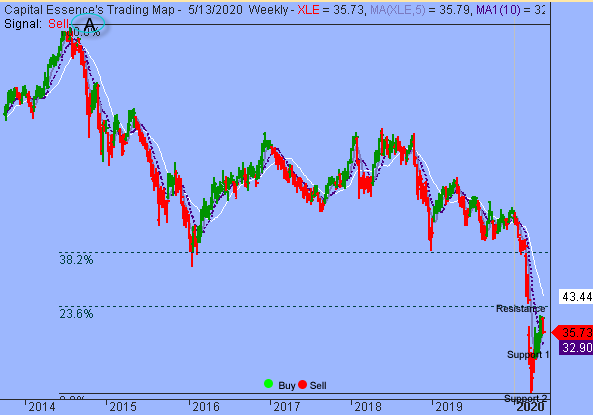 Our “U.S. Market Trading Map” painted XLE bars in red (sell) – see area ‘A’ in the chart. Over the past few weeks, XLE has been trending higher in a short-term corrective after the late February massive selloff found some support near the 23 zone.  The late March rally pushed the ETF up to the early March bearish breakaway gap.  This week’s downside reversal suggested that the resistance would hold and a retest of the March low should be expected.  XLE has minor support near 32.90.  A close below that level will confirm this.

XLE has resistance near 39.  Short-term traders could use that level as the logical level to measure risk against. 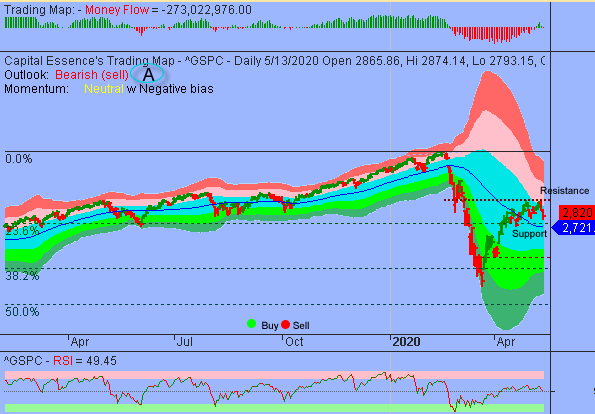 Wednesday’s downside follow-through confirmed Tuesday’s bearish reversal signal.  Money Flow measure fell below the zero line, another sign that the bears are more aggressive as prices dropped than the bulls were as prices ascended.  While seemingly vulnerable to further short-term weakness, support is strong near the trend channel moving average, currently at 2720.  It could help minimize downside follow-through and widespread breakdowns.

On the upside, the S&P has 2860 to trade against. If the index manages to close above that level on a weekly closing basis then a retest of the important sentiment 3000 zone would be easier to achieve.

In summary, Wednesday’s downside follow-through confirmed Tuesday’s bearish signal.  While seemingly vulnerable to further short-term weakness, support is strong near the trend channel moving average, currently at 2720. That level is too big and too important to fall quickly.  It could help minimize downside follow-through and widespread breakdowns.