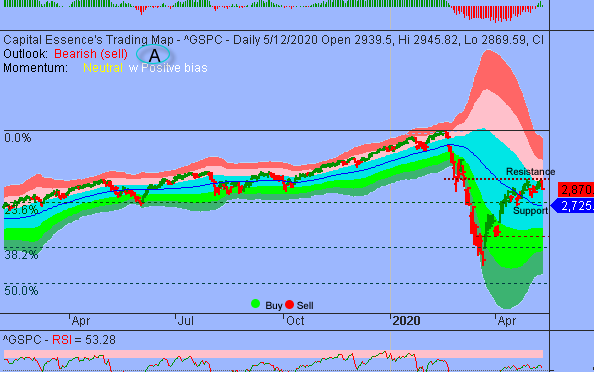 Good Morning, this is Capital Essence’s Market Outlook (the technical analysis of financial markets) for Wednesday May 13, 2020.

We’ve noted in the previous Market Outlook that: “although short-term overbought condition is keeping buyers at bay, S&P’s 3000 continues to act as price magnet.  S&P has 2890 to trade against.  If it closes below that level, the next leg is likely lower, and we’re looking at 2730, based on the trend channel moving average.”  As anticipated, S&P opened higher in early Tuesday session, traded as high as 2,945.82 before sellers stepped in and pushed prices significantly lower.  For the day, the bench mark gauge dropped 2 percent to 2,870.12.  The Dow Jones Industrial Average fell 1.9 percent to 23,764.78. The Nasdaq Composite also fell more than 2 percent to 9,002.55.  The CBOE Volatility Index (VIX), widely considered the best gauge of fear in the market, surged nearly 20 percent to 33.04.

Industrials were among the hardest hit Tuesday after data showed that U.S. consumer prices dropped by the most since the Great Recession in April, due to a plunge in demand for gasoline and services including airline travel as people stayed home during the coronavirus crisis.  As such, the Industrial Select Sector SPDR ETF (XLI) dropped 2.81 percent on the day and is down more than 25 percent YTD, underperformed the S&P.  Now the question is what’s next?  Below is an update look at a trade in XLI. 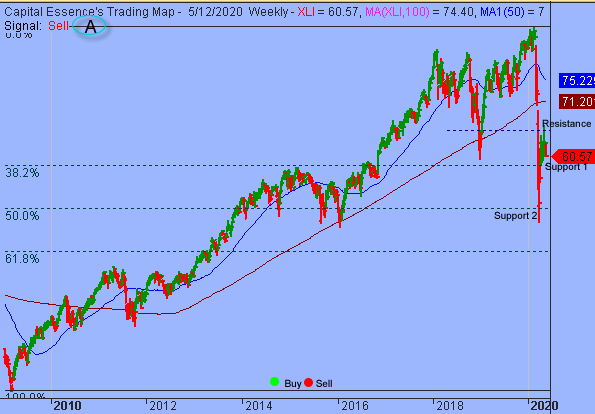 Our “U.S. Market Trading Map” painted XLI bars in red (sell) – see area ‘A’ in the chart. XLI has been on a tear in recent weeks after the late February selloff found some footing near the 50% Fibonacci retracement of the 2009-2018 major upswing.  The late March rally tested resistance at the late 2018 breakout point.  This week’s bearish reversal suggested that the resistance would hold and a retest of the 38.2% Fibonacci retracement, just below 59, will follow shortly.  That level is significant in charting terms.  A close below it on a weekly closing basis will bring the 50 zone back into view.

XLI has resistance near 66.20.  Short-term traders could use that level as the logical level to measure risk against. 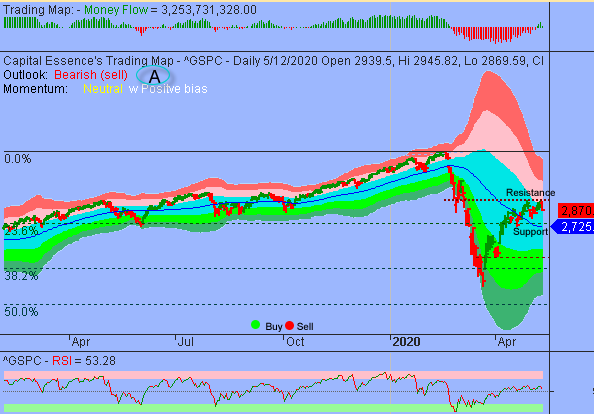 Once again, S&P retreated after the rally attempt ran into resistance at the early March breakdown point.  Market internal deteriorated suggesting further short-term weakness likely.  S&P has 2850, or the April rising trend line, to trade against.  A failure to hold above that level has measured move to around 2725, based on the trend channel moving average.

On the upside, there is a strong band of resistance between 2950 and 3000.  There is no particular reason to turn bullish until that area is eclipsed.

In summary, market internal is deteriorating as S&P struggled to get pass 3000.  The index could signal a downward trajectory, depending on how it closes over the next few days.  Initial support is defined by April rising trend line, around 2850.  If it closes below that level, the next leg is likely lower, and we’re looking at the low 2725, based on the trend channel moving average.