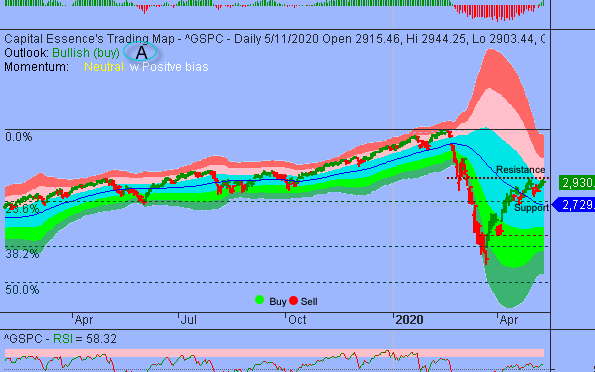 Good Morning, this is Capital Essence’s Market Outlook (the technical analysis of financial markets) for Tuesday May 12, 2020.

We’ve noted in the previous Market Outlook that: “overbought conditions have returned on an intraday basis but momentum remains supportive so downside risk could be limited. It is possible that S&P could continue to drift higher as trading sentiment remains strong.  Short-term traders can anticipate increase short-term volatility with rapid up and down moves in the market.”  S&P closed near the unchanged mark, up just 0.39 points to 2,930.19, after the early rally attempt was met with a new wave of selling interest.  The Dow Jones Industrial Average fell 0.4 percent to 24,221.99.  The Nasdaq Composite climbed 0.7 percent to 9,192.34.  The CBOE Volatility Index (VIX), widely considered the best gauge of fear in the market, fell more than 1 percent to 27.57

Banking stocks came under pressure amid concerns that longer-than-expected economic recovery could increase credit losses for banks.  JPMorgan (JPM) fell nearly 3 percent while Bank of America (BAC) and Citigroup (C) were down more than 4 percent.  As such, the Financial Select Sector SPDR ETF (XLF) dropped nearly 2 percent on the day and is down 29 percent YTD, underperformed the S&P.  Now the question is what’s next?  Below is an update look at a trade in XLF. 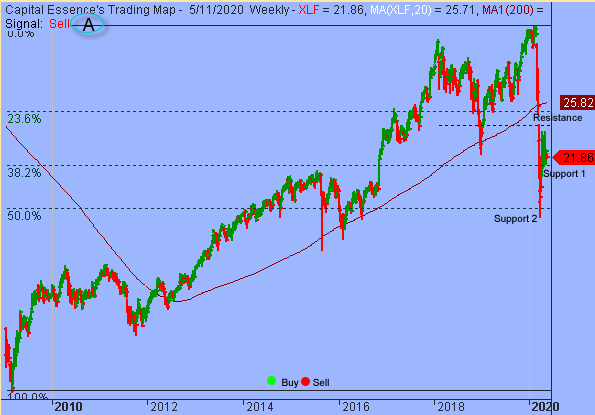 Our “U.S. Market Trading Map” painted XLF bars in red (sell) – see area ‘A’ in the chart. Over the past few weeks, XLF has been basing sideways after the March recovery rally ran out of steam near the late 2018 breakout point.  This week’s selloff suggested that the April sideways trading pattern has resolved itself into a new downswing.  Right now the most important thing to watch is trading behavior near 21, or the 38.2% Fibonacci retracement of the 2009-2018 major upswing. A close below that level on a weekly closing basis will bring the March low, around 18, into view.  That level roughly corresponds with the 50% Fibonacci retracement.

XLF has resistance near 23.60.  Short-term traders could use that level as the logical level to measure risk against. 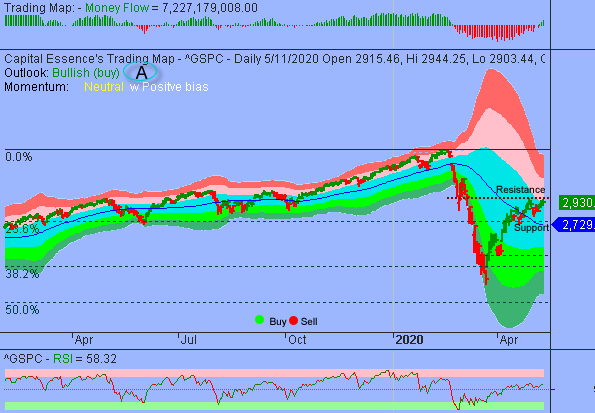 S&P retreated after the early rally attempt ran into resistance at the early March breakdown point.  Market internal remains positive but upside momentum does not appeared strong enough to generate widespread breakouts.  While more backing and filling would not be a surprise, if the S&P could hold above 2890 then a test of 3000 would be easier to achieve.  With that said, a failure to hold above 2890 will turn the short-term trend down and a retest of the trend channel moving average should follow shortly.

In summary, although short-term overbought condition is keeping buyers at bay, S&P’s 3000 continues to act as price magnet.  S&P has 2890 to trade against.  If it closes below that level, the next leg is likely lower, and we’re looking at 2730, based on the trend channel moving average.