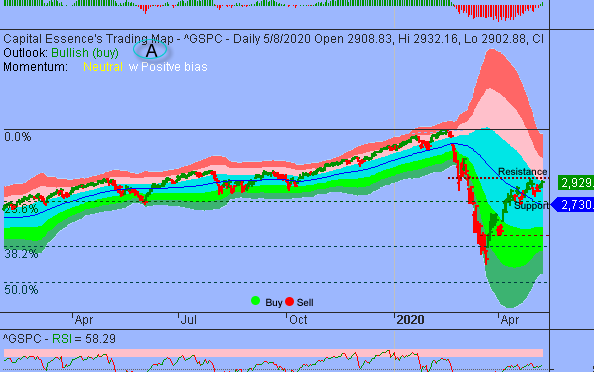 Good Morning, this is Capital Essence’s Market Outlook (the technical analysis of financial markets) for Monday May 11, 2020.

We’ve noted in the previous Market Outlook that: “the big picture remains the same. There’s an orderly high level consolidation near S&P’s 2800-2900 as traders wondered whether more gains are warranted given the massive advance over the past weeks.  While we’re near term bullish on the S&P, we believe that the market needs some sorts of positive catalysts to build up the needed energy for a new leg higher.”  Stocks closed higher Friday following a better-than-expected nonfarm payrolls data.  The Bureau of Labor Statistics reported payrolls dropped by 20.5 million last month and the unemployment rate surged to 14.7%, better than the forecasting of 22 million jobs lost and an unemployment rate of 16%.  For the day, the Dow Jones Industrial Average jumped 1.9 percent to 24,331.32.  The S&P added 1.6 percent to 2,929.80, while the Nasdaq Composite climbed 1.5 percent to 9,121.32.  The CBOE Volatility Index (VIX), widely considered the best gauge of fear in the market, fell 11 percent to 27.98

Apple (AAPL) rose 2.4 percent after announcing it would reopen stores in four U.S. states starting next week, albeit with restrictions on capacity. Gains from Facebook, Amazon Alphabet and Apple helped lift the index back into positive territory for 2020. At one point, the NASDAQ was down more than 25 percent year to date.  As such, the Technology Select Sector SPDR ETF (XLK) rose 1.47 percent on the day and is up more than 4 percent YTD, outperformed the S&P.  Now the question is what’s next?  Below is an update look at a trade in XLK. 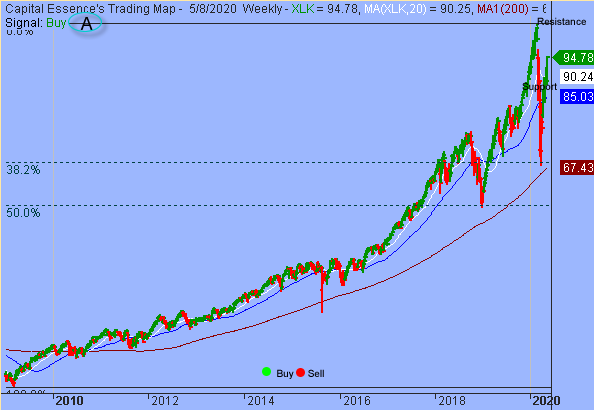 Our “U.S. Market Trading Map” painted XLK bars in green (buy) – see area ‘A’ in the chart. XLK is on a tear in recent weeks after the late February selloff found support near the 38.2% Fibonacci retracement of the 2009-2018 major upswing.  That level roughly corresponds with the 4-year moving average.  Last week’s upside follow-through confirmed the early May bullish breakout above the closely watch 90 zone.  This is a positive development, opened up for a rapid advance toward the prior high set earlier this year, just below 103. 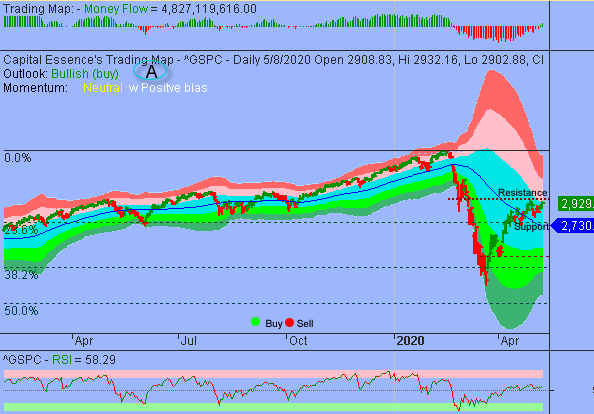 S&P moved up to test resistance at the lower boundary of the pink band after the late April pulled back found some footing near the trend channel moving average.  Overbought conditions have returned on an intraday basis but market internal has been strengthened, supporting further upside follow-through and a test of the more important resistance near 3000.  As mentioned, 3000 is the line in the sand.  We’d turn particular bullish on consecutive close above that level.

On the downside, S&P has minor support near 2875.  A failure to hold above that level has measured move to around 2840.

In summary, overbought conditions have returned on an intraday basis but momentum remains supportive so downside risk could be limited. It is possible that S&P could continue to drift higher as trading sentiment remains strong.  Short-term traders can anticipate increase short-term volatility with rapid up and down moves in the market.