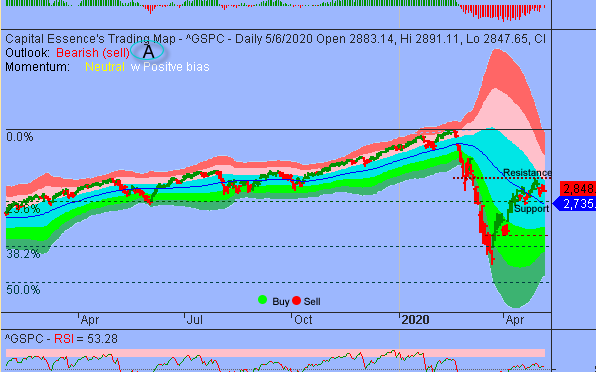 Good Morning, this is Capital Essence’s Market Outlook (the technical analysis of financial markets) for Thursday May 7, 2020.

We’ve noted in the previous Market Outlook that: “while S&P’s 3000 continues to act as price magnet market internal does not appeared strong enough to generate widespread breakouts.  There is a high probability of a period of consolidation activity between S&P’s 2800 and 3000 that may last several days.  This consolidation band provides a rally and retreat trading environment for traders.”  As anticipated, S&P closed lower Wednesday after the early rally attempt was met with a new wave of selling interest.  The index traded as high as 2,891.11 before gave back all of the early gains and some more to close at 2,848.42, down 0.7 percent.  The Dow Jones Industrial Average slid 0.9 percent to 23,664.64.  However, the Nasdaq Composite rose 0.7% to 8,854.39 as big tech stocks built on their recent gains.  The CBOE Volatility Index (VIX), widely considered the best gauge of fear in the market, rose more than 1 percent to 34.12

Utilities, which usually serve as the defensive corner of the market, were among the worst hit, paced by declines from NiSource (NI) and American Electric Power (AEP) amid weaker-than-expected quarterly results.  As such, the Utilities Select Sector SPDR ETF (XLU) fell 3.40 percent on the day and is down more than 15 percent YTD, underperformed the S&P.  Now the question is what’s next?  Below is an update look at a trade in XLU. 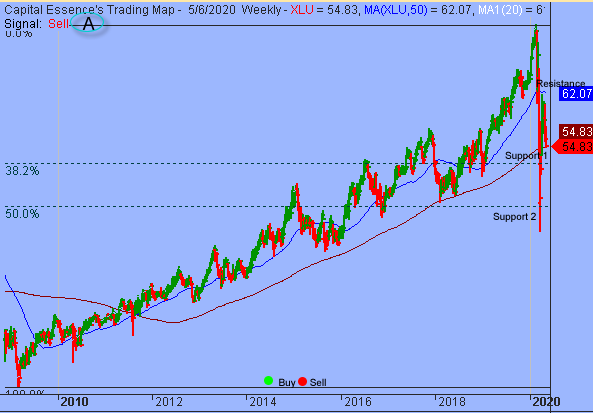 Our “U.S. Market Trading Map” painted XLU bars in red (sell) – see area ‘A’ in the chart. Over the past few weeks, XLU has been trending lower after the late March rally ran into resistance at the 1-year moving average, around 62.  This week’s selloff is testing support at the 4-year moving average.  This level is significant in charting term.  It was tested several times over the past years.  A close below 54 on a weekly closing basis signify a bearish breakout and a retest of the March low, just above 43, should be expected.

XLU has resistance near 62.  Short-term traders could use that level as the logical level to measure risk against. 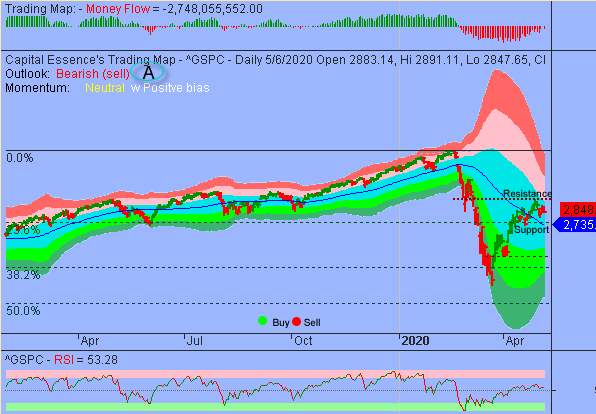 S&P moved down to test support at Tuesday’s breakaway gap after the early rally attempt ran out of steam just below the closely watch 2900 zone.  Money Flow measure is below the zero line, indicating a negative net demand for stocks.  The fact that buying pressure deteriorated as the S&P tested key price level suggested that most of the potential buyers at this level had already placed their bets.  The next batch of buyers typically sits at a much lower level.  While more backing and filling would not be a surprise, a failure to hold above 2830 would see a pickup in volatility and a test of the more important support at the2730 zone, or the trend channel moving average, should be expected.

The early March breakdown point, just below 3000, represents key resistance.  There is no reason to turn particular bullish until this level is eclipsed.