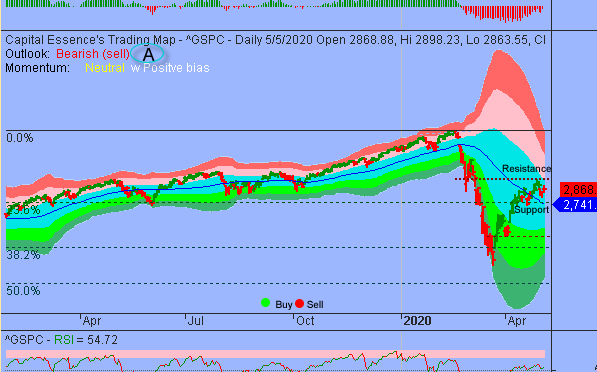 Good Morning, this is Capital Essence’s Market Outlook (the technical analysis of financial markets) for Wednesday May 6, 2020.

We’ve noted in the previous Market Outlook that: “recent trading actions leaving the S&P in what looks to us like an orderly high level consolidation of the late April recovery rally.  The index is holding firmly above 2800, suggesting that downside risk could be limited.  Near-term, there is a high probability of rapid rallies and retreats between 2750 and 3000.  Short-term traders can play the range but the market is volatile and tight stops are advisable.”  As anticipated, stocks traded significantly higher in early Tuesday session with the S&P traded as high as 2898 before gave back some of the early gains to close at 2,868.44, up 0.9 percent.  The Nasdaq Composite advanced 1.1 percent to 8,809.12.  The Dow Jones Industrial Average added 0.6 percent to 23,883.09.  The CBOE Volatility Index (VIX), widely considered the best gauge of fear in the market, fell more than 6 percent to 33.61.

Healthcare stocks led the broader market higher as investors digested positive news on the drugmakers’ efforts to produce a coronavirus vaccine.  Pfizer (PFE) rose more than 2 after announcing it had begun testing a potential coronavirus vaccine in the United States.  Regeneron Pharmaceuticals (REGN) jumped nearly 6 after reporting earnings that topped consensus estimates. The healthcare company also said it was on track to begin human trials of its experimental coronavirus antibody cocktail in June.  As such, the Health Care Select Sector SPDR ETF (XLV) gained 2.17 percent on the day but is down less than 2 percent YTD, outperformed the S&P.  Now the question is what’s next?  Below is an update look at a trade in XLV. 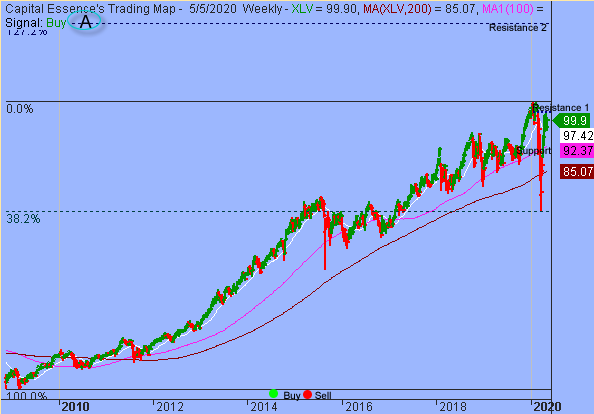 Our “U.S. Market Trading Map” painted XLV bars in green (buy) – see area ‘A’ in the chart. Over the past few weeks, XLV has been basing sideways using the 97 zone as support after the late March rally ran into resistance at the late February breakdown point, near 102.  The fact XLV managed to hold on to most of the March gains is bullish, suggesting that the ETF will take a leg higher as soon as it works off excessive optimism.  Over the next few weeks, traders should monitor the rally and retreat behavior as the 102-105 zone is tested as resistance.  A consecutive close above 105 on a weekly basis signify a bullish breakout, increases the probability for a rapid advance toward the 127.2% Fibonacci extension, around 128.

XLV has support near 92.  Short-term traders could use that level as the logical level to measure risk against. 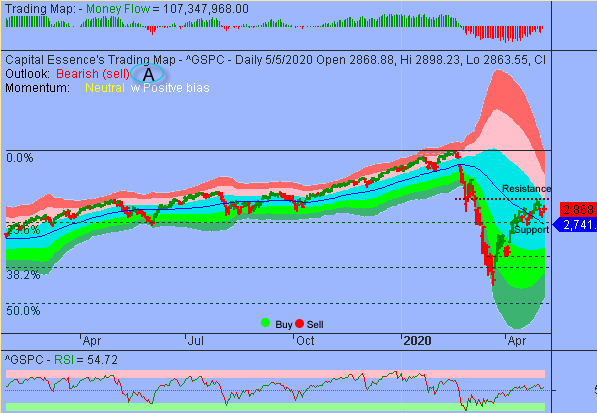 S&P rebounded nicely after recent pullback found support near the important sentiment 2800 zone.  Tuesday’s rally tested resistance at last week’s bearish breakaway gap, around 2900.  The late day selloff suggested that the resistance would hold, at least for the time being.  Market internal has somewhat improved but upside momentum does not appeared strong enough to generate widespread breakouts.  While more backing and filling would not be a surprise, a close below 2800 would see a massive pickup in volatility.  We’d turn particularly bearish if the index closes below the trend channel moving average, currently at 2741.

The early March breakdown point, just below 3000, represents key resistance.  There is no reason to turn particular bullish until this level is eclipsed.

In summary, while S&P’s 3000 continues to act as price magnet market internal does not appeared strong enough to generate widespread breakouts.  There is a high probability of a period of consolidation activity between S&P’s 2800 and 3000 that may last several days.  This consolidation band provides a rally and retreat trading environment for traders.