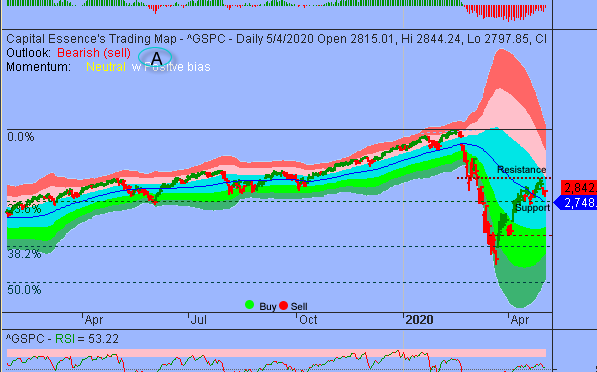 Good Morning, this is Capital Essence’s Market Outlook (the technical analysis of financial markets) for Tuesday May 5, 2020.

We’ve noted in the previous Market Outlook that: “our near-term work on price pattern and momentum suggested that an important near-term high has been established and the S&P shifted to correction mode.  The big test for the index is less than 1 percent below its currently level, which it needs to hold on a consecutive daily closing basis, according to our work, in order to prevent a test of secondary support in the 2750 zone.”  As anticipated, stocks sold off in early Monday with the S&P was down 1.2 percent at session low before buyers stepped in and pushed prices higher.  For the day, the bench mark gauge rose 0.4 percent to 2,842.74. The Nasdaq Composite climbed 1.2 percent to 8,710.71.  The Dow Jones Industrial Average added 0.1 percent to 23,749.76.  The CBOE Volatility Index (VIX), widely considered the best gauge of fear in the market, fell more than 3 percent to 35.97

Oil prices pared intraday losses to settle higher for the day.  West Texas Intermediate crude oil for June delivery jumped 3.1 percent to settle at $20.39 a barrel on the New York Mercantile Exchange.  Valero Energy (VLO), Marathon Petroleum (MPC) and Phillips 66 (PSX), were among the biggest gainers, with the latter surging nearly 8 percent.  As such, the Energy Select Sector SPDR ETF (XLE) rose 3.46 percent on the day and is down more than 38 percent YTD, underperformed the S&P.  Now the question is what’s next?  Below is an update look at a trade in XLE. 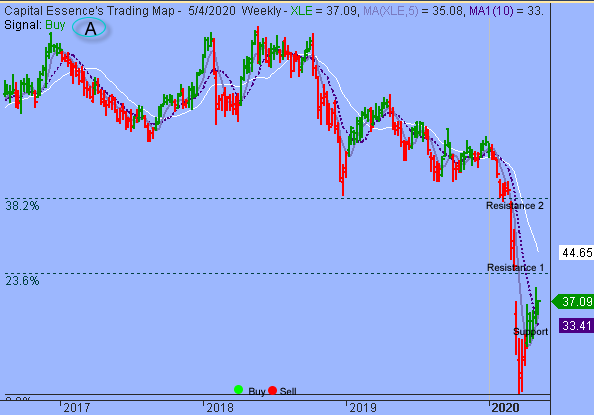 Our “U.S. Market Trading Map” painted XLE bars in green (buy) – see area ‘A’ in the chart. Over the past few weeks, XLE has been trending higher in a short-term corrective mode after the early 2020 selloff found support near the 23 zone.  Last week’s pullback respected support at the March rising trend line.  This is a positive development, increased the probability for a rapid advance toward the 23.6% Fibonacci retracement, around 42.50.  A sustain advance above that level on a weekly closing basis will open up for a retest of the late February breakdown point, around 53.

XLE has support just above 33.  Short-term traders could use that level as the logical level to measure risk against. 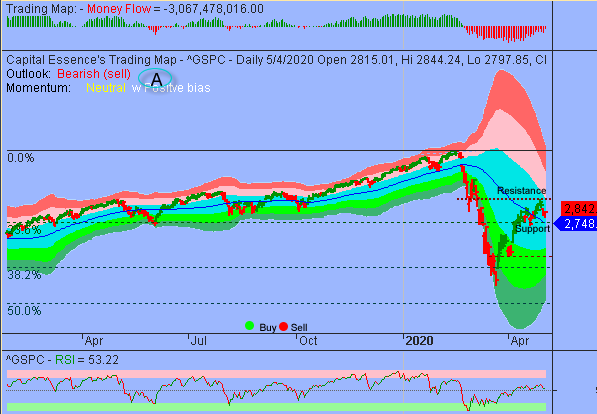 As expected, the S&P moved down to test support at the important sentiment 2800 zone after the late April recovery rally ran out of steam near the early March breakdown point, just below the important sentiment 3000 mark.  The late day rally suggested that the support would hold, at least for the time being.  Market internal has been strengthened but upside momentum does not appeared strong enough to generate widespread breakouts.  Over the next few days, traders should monitor trading behaviors as the 2800-2750 zone is tested as support.  If the market is going to find a bottom in the near term, we want to see the S&P stabilizes and climbs above 2880.  A close below 2750 meanwhile, increases the probability for a retest of the March low.

In summary, recent trading actions leaving the S&P in what looks to us like an orderly high level consolidation of the late April recovery rally.  The index is holding firmly above 2800, suggesting that downside risk could be limited.  Near-term, there is a high probability of rapid rallies and retreats between 2750 and 3000.  Short-term traders can play the range but the market is volatile and tight stops are advisable.