Good Morning, this is Capital Essence’s Market Outlook (the technical analysis of financial markets) for Monday May 4, 2020.

We’ve noted in the previous Market Outlook that: “S&P’s quick run is showing some signs of exhaustion.  Thursday’s selloff suggested that the index is in for a ‘range-bound’ trading environment.  This is a rally and retreat environment. It is not a trending environment. Short-term traders can anticipate continued volatility with rapid up and down moves in the market.”  As anticipated, stocks closed lower Friday as investor sentiment was rocked by fresh U.S.-China worries as Donald Trump threatened action against Beijing over the Covid-19 pandemic.  The Dow Jones Industrial Average fell 2.5 percent to 23,723.69.  The S&P dropped 2.8 percent to 2,830.71. The Nasdaq Composite dropped 3.2 percent to 8,604.95.  The CBOE Volatility Index (VIX), widely considered the best gauge of fear in the market, surged about 9 percent to 37.19.

Tech titan Amazon (AMZN) led declining stocks on the week’s final day of trading with shares down 7.6 percent after announcing plans to spend all its second-quarter profits on its coronavirus response.  Apple (AAPL) reported quarterly earnings that topped analyst expectations, but its revenue growth remained flat on a year-over-year basis, shares dropped 1.6 percent.  As such, the Technology Select Sector SPDR ETF (XLK) fell 2.75 percent on the day and is down about 3 percent YTD, outperformed the S&P.  Now the question is what’s next?  Below is an update look at a trade in XLK. 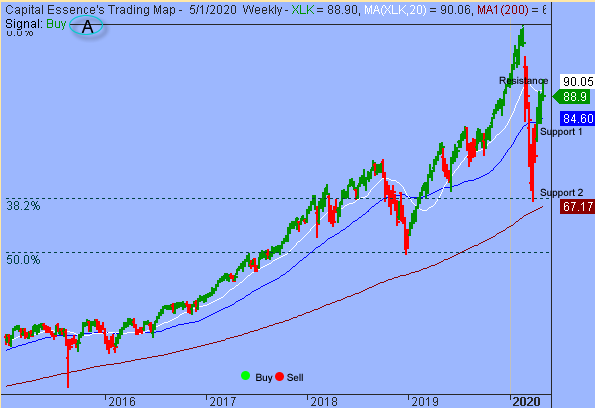 Our “U.S. Market Trading Map” painted XLK bars in green (buy) – see area ‘A’ in the chart. XLK has been on a tear in recent weeks after the February selloff found support near the 38.2% Fibonacci retracement. That level roughly corresponds with the 4-year moving average.  The late March rally is testing resistance at the 90 zone.  Last week’s bearish doji candlestick suggested that the resistance would hold.  Right now, follow-through is the key.  A consecutive close below 90 has measured move to around 85.  That level is significant in charting terms.  A failure to hold above that level on a weekly closing basis will turn the short-term trend down and a retest of the March low would be expected.

XLK has resistance near 92.  Short-term traders could use that level as the logical level to measure risk against. 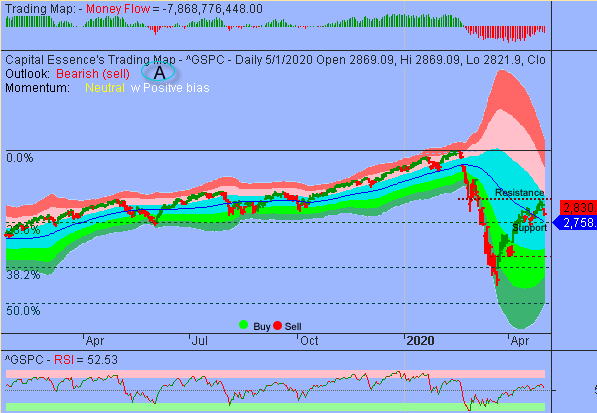 As expected, S&P sold off after last week’s recovery rally ran out of steam near the early March breakdown point, just below the important sentiment 3000 mark.  Market internal deteriorated following recent selloff, suggesting the index might have to move to a much lower level to attract new buyers.  Over the next few days, traders should monitor trading behaviors as the 2800-2750 zone is tested as support.  If the market is going to find a bottom in the near term, we want to see the S&P stabilizes near 2750.  A close below that level increases the probability for a retest of the March low.

In summary, our near-term work on price pattern and momentum suggested that an important near-term high has been established and the S&P shifted to correction mode.  The big test for the index is less than 1 percent below its currently level, which it needs to hold on a consecutive daily closing basis, according to our work, in order to prevent a test of secondary support in the 2750 zone.