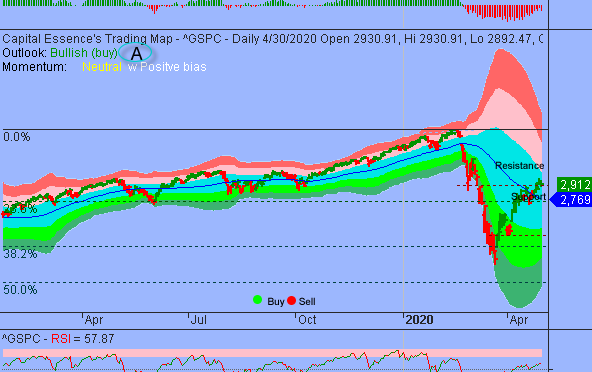 Good Morning, this is Capital Essence’s Market Outlook (the technical analysis of financial markets) for Friday May 1, 2020.

We’ve noted in the previous Market Outlook that: “it seemed to us that traders are committed to take the S&P up to the important sentiment 3000 mark.  Nonetheless, the fact that Money Flow measure remains negative as prices ascending does not favor a sustain breakout.  As for strategy, traders should look to buy downside protection for winning positions.”  As anticipated, the S&P gave back some of the prior session’s gains as another round of dismal economic data led investors to trim some profits while the market wrapped up its best month in decades.  The U.S. Department of Labor reported Thursday that initial jobless claims slowed to a pace of 3.8 million, compared with 4.4 million last week.  Consumer spending, which accounts for more than two-thirds of U.S. economic activity, fell 7.5% last month, the steepest monthly decline on record.

Financials were among the biggest decliners Thursday, giving up its recent gains, as the weaker economic data cooled expectations that a partial economic reopening would kick-start the labor market and potentially lead to a decline in credit losses for big Wall Street banks.  As such, the SPDR S&P Bank ETF (KBE) tumbled 3.57 percent on the day and is down nearly 34 percent YTD, underperformed the S&P.  Now the question is what’s next?  Below is an update look at a trade in KBE. 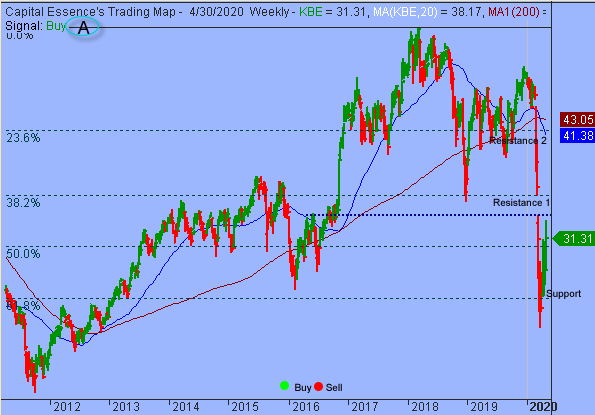 Our “U.S. Market Trading Map” painted KBE bars in green (buy) – see area ‘A’ in the chart. Over the past few weeks, KBE has been trending higher in a short-term corrective mode after the late February massive selloff found some footing near the 61.8% Fibonacci retracement of the 2009-2018 major upswing.  This week’s upside follow-through pushed the ETF above the 50% Fibonacci retracement.  This is a positive development, opened up for a test of the more important resistance near the 33-36 zone, or the 2016 breakout point and the 38.2% Fibonacci retracement.  A close above 36 on a weekly basis has measured move to 40.

KBE has support near 25.  Short-term traders could use that level as the logical level to measure risk against. 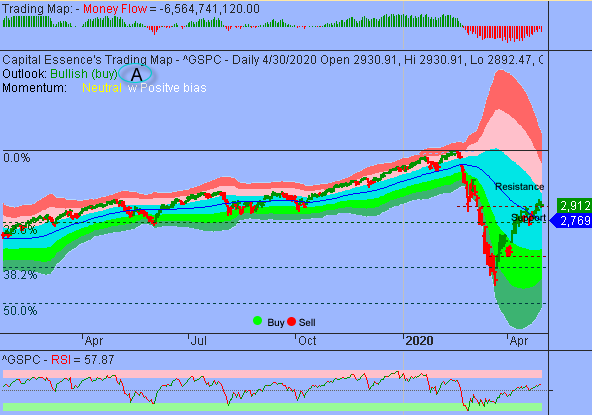 As expected, S&P retreated after recent rally ran out of steam just below the important sentiment 3000 mark.  Thursday’s selloff tested support at the 2900 zone.  The late day rally suggested that the support would hold, at least for the time being.  Market internal deteriorated but downside momentum does not appeared strong enough to generate widespread breakdown.  If the S&P could hold above 2900 then a test of 3000 could be easier to achieve.

In summary, S&P’s quick run is showing some signs of exhaustion.  Thursday’s selloff suggested that the index is in for a ‘range-bound’ trading environment.  This is a rally and retreat environment. It is not a trending environment. Short-term traders can anticipate continued volatility with rapid up and down moves in the market.