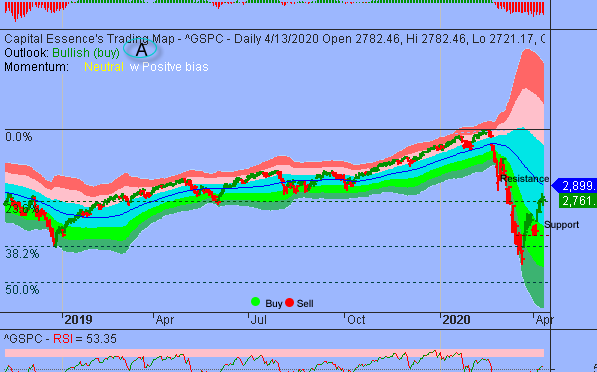 We’ve noted in the previous Market Outlook that: “while momentum has been strengthened after last week’s impressive rally pushed the S&P toward the falling trend channel moving average, near the 2900 zone, market internal does not appear strong enough to generate a sustain breakout.  As for strategy, traders should consider taking down exposure into intraday bounces.”  As anticipated, the S&P ended Monday session lower, down 1 percent to 2,761.63, as investors continued to weigh the coronavirus outlook while bracing for the start of the corporate earnings season.  The Dow Jones Industrial Average fell 1.4 percent to 23,390.77. The Nasdaq Composite added 0.5 percent to 8,192.42.  The CBOE Volatility Index (VIX), widely considered the best gauge of fear in the market, fell more than 1 percent to 41.17.

Industrials fell nearly 3 percent, paced by an 8.7 percent decline in Caterpillar (CAT) after Bank of America downgraded the stock to underperform from neutral. The bank expressed worries the hit to the energy and mining sectors from the coronavirus would hurt the heavy-equipment maker’s results.  As such, the Industrial Select Sector SPDR ETF (XLI)  fell 2.93 percent on the day and is down nearly 25 percent YTD, underperformed the S&P.  Now the question is what’s next?  Below is an update look at a trade in XLI. 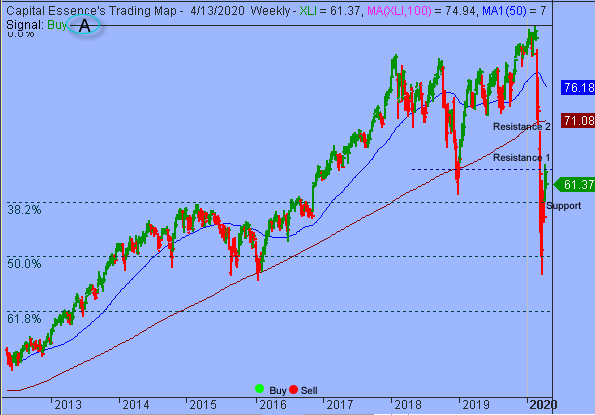 Our “U.S. Market Trading Map” painted XLI bars in green (buy) – see area ‘A’ in the chart.  Over the past few weeks, XLI has been trending higher in a short-term corrective mode after the late February 2020 selloff found support near the 50% Fibonacci retracement of the 2009-2020 bull market.  Last week’s rally pushed the ETF up against the late 2018 low.  This week’s selloff suggested that the resistance would hold, at least for the time being.  Right now, the most important thing to watch is trading behavior as the 58 zone, or the 38.2% Fibonacci retracement, is tested as support.  If the bulls can hold this support then a retest of the 4-year moving average, around 71, is easier to be achieved.

XLI has support near 58.  Short-term traders could use that level as the logical level to measure risk against. 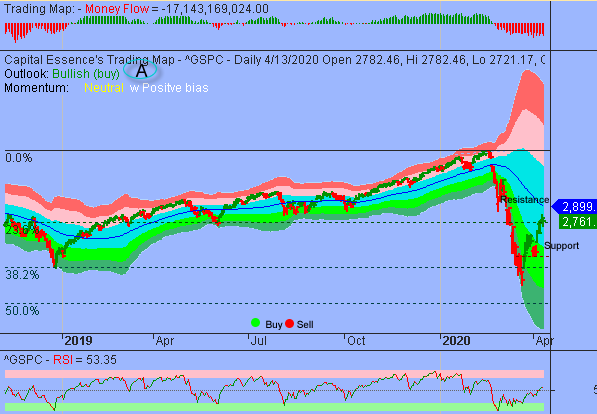 S&P retreated after the early April rally ran out of steam near the 23.6% Fibonacci retracement, just above the 2800 zone.  Momentum indicator shifted lower from near neutral zone, suggesting further short-term weakness likely.  Perhaps the lagging Money Flow measure is the best illustration of the bears’ case.  Over the next few days, traders should monitor the retreat and rebound behaviors as the 2650 zone is tested as support.  A failure to hold above that level signify a bearish breakdown and a much deeper pullback should be expected.

For now, the bulls will continue to have the benefit of the doubts as long as the S&P holds above 2650.   A failure to hold above that level has measured move to around 2515.

In summary, S&P’s quick run is showing some signs of exhaustion.  Market internals deteriorated as the index struggled to get pass the 2800 zone.  The index could signal a downward trajectory, depending on how it closes over the next few days.  S&P has minor support near 2725.  If it closes below that level, the next leg is likely lower, and we’re looking at 2650.