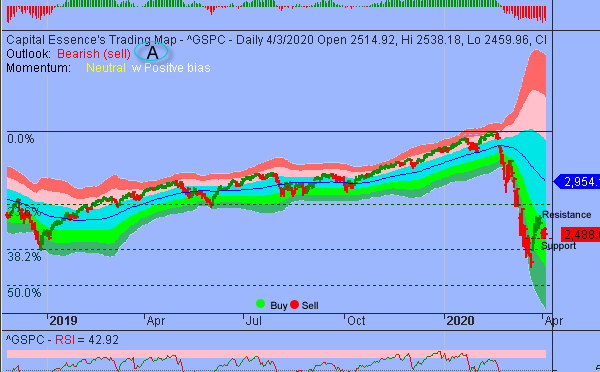 Stocks fell on Friday to end another volatile week of trading, pressured by a spike in coronavirus-related deaths in the United States.  The Dow Jones Industrial Average slid 1.7 percent to 21,052.53. The S&P dropped 1.5 percent to 2,488.65. The Nasdaq Composite also pulled back 1.5 percent to 7,373.08.  The CBOE Volatility Index (VIX), widely considered the best gauge of fear in the market, fell more than 8 percent to 46.80.

Health care stocks spiked last week as traders betting on shares of companies, which are working on vaccines and therapies aimed at preventing or treating COVID-19 infections.  As such, the Health Care Select Sector SPDR ETF (XLV) rose more than 2 percent on the week but is down nearly 15 percent YTD, outperformed the S&P.  Now the question is whether the rally has more legs?  Below is an update look at a trade in XLV. 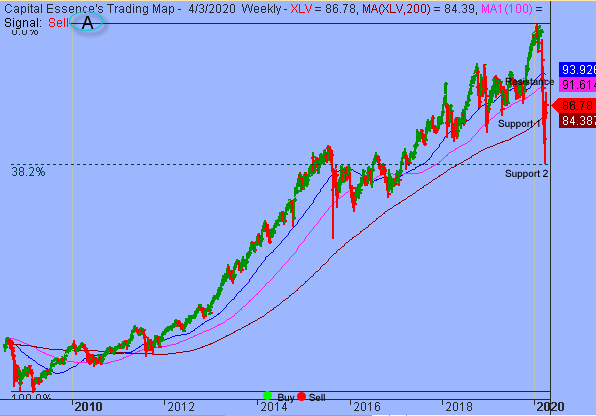 Our “U.S. Market Trading Map” painted XLV bars in red (sell) – see area ‘A’ in the chart.  Over the past few weeks, XLV has been trending lower in a short-term corrective mode after the late February selloff found support neat the 38.2% Fibonacci retracement of the 2009-2020 upswing.  This is a short-term positive but let’s notice the looming resistance at the 2-year moving average, just below 92.  That level offered support since the ETF broke out in early 2017. It was significant when XLV fell below it in early March.  This history indicated an important role in terms of resistance.  So it should not be surprising to see some selling pressures as the 92 zone is tested. Short-term traders could use that level as the logical level to measure risk against.

XLV has support near 84.  Below it, a more significant support can be found around 73. 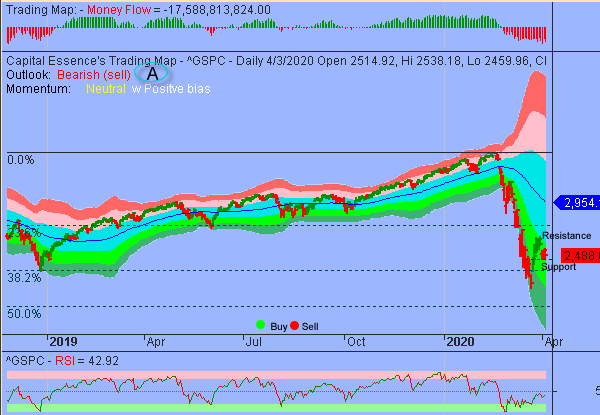 S&P retreated after the late March recovery rally ran into resistance at the upper boundary of the green band, around 2650.  Over the past few days, the index is basing sideways using the late March breakout as support. Right now, follow-through is the key.  A close below 2470 on a daily closing basis will confirm last week’s bearish reversal signal and a retest of the March low, just below 2200, should be expected.

On the upside, 2650 represents key overhead resistance.  If the market is going to find bottom in the near term, we want to see the S&P stabilizes and climbs above 2650.  Staying below that level heralds more losses.  With that said, a weekly close above 2650 will turn the short-term trend up and trigger acceleration toward the 2900 zone.

In summary, while the near-term technical bias is skewed toward further weaknesses, the bulls should not get into any serious trouble as long as the S&P hold above 2470.  However, without real buying pressure expect continue near-term volatility as the markets trying to form a new trading range.