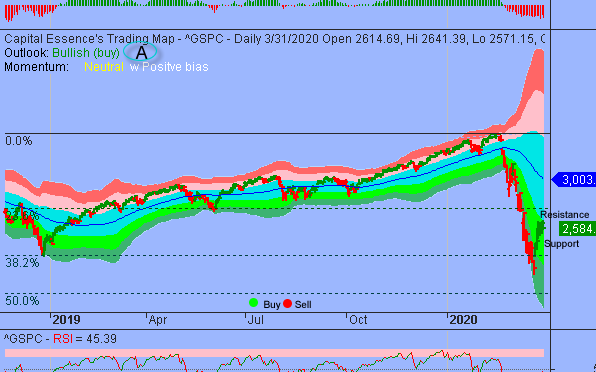 We’ve noted in the previous Market Outlook that: “S&P shifted to holding pattern as traders wondered whether more gains are warranted given the massive advance over the past week.  While we remain near term bullish on the S&P, we believe that the market needs some sorts of positive catalysts to build up the needed energy for a new leg higher.”  As anticipated, S&P traded higher in early Tuesday session before a wave of late selling hit, leading the bench mark gauge to its worst ever first quarter amid worries the widely-expected recession in the U.S. may be worse than feared as the Covid-19 pandemic intensified.

Bank stock such as JPMorgan Chase, Citigroup and Bank of America continued to drop, down 3 to 4 percent. The stocks have been under big pressure this week from declining rates.  As such, the Financial Select Sector SPDR ETF (XLF) fell 2.76 percent on the day and is down more than 32 percent YTD, underperformed the S&P.  Now the question is what’s next?  Below is an update look at a trade in XLF. 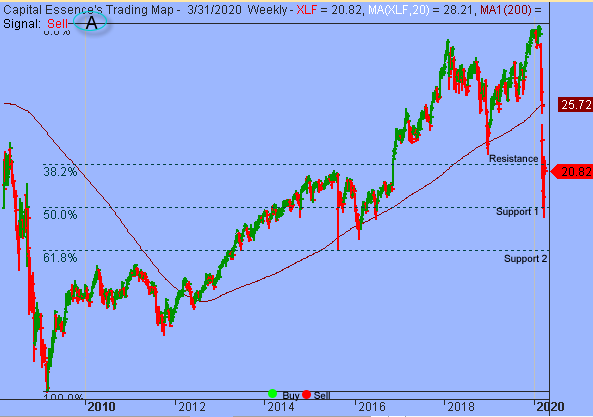 Our “U.S. Market Trading Map” painted XLF bars in red (sell) – see area ‘A’ in the chart.  XLF tumbled out of gate after the 2019 rally ran out of steam just above 31.  The February massive selloff found some support near the 50% Fibonacci retracement of the 2009-2020 major upswing.  The March recovery rally tested resistance at the 38.2% Fibonacci retracement.  This week’s bearish trading action suggested that the resistance would hold, at least for the time being, and a retest of the March low, around 18, should be expected.  That level is significant in charting terms.  A failure to hold above it has measured move to around 15, or the 61.8% Fibonacci retracement.

XLF has resistance near 22.  Short-term traders could use that level as the logical level to measure risk against. 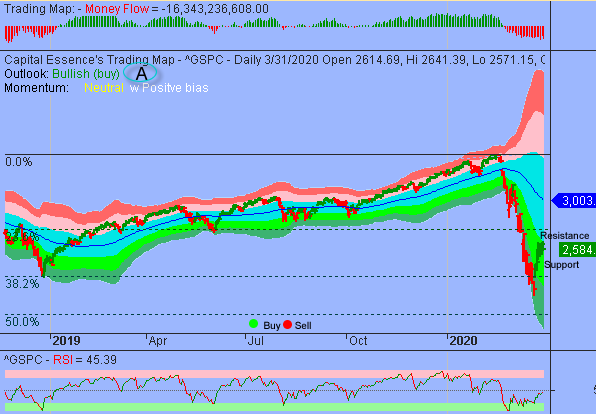 The big picture remains the same. There is a consolidation near the upper boundary of the green band which represents the digestion period in the aftermath of the March oversold relief rally. As mentioned, the main event here is the upward push against the upper boundary of the green band.  That level was significant when the index fell below it in late February.   Money Flow measure hovers around the lowest level going back to late 2018, indicating a negative net demand for stocks.  Momentum has been strengthened over the past few days but does not appeared strong enough to fuel a significant push upward from here.  These elements suggested further backings and fillings likely.

For now, 2650 represents key overhead resistance.  If the market is going to find bottom in the near term, we want to see the S&P stabilizes and climbs above 2650.  Staying below that level heralds more losses.  With that said, a weekly close above 2650 will turn the medium-term trend up and trigger acceleration toward the 2900 zone.

In summary, the big picture remains the same. There is a consolidation near the upper boundary of the green band, which represents digestion period.  S&P’s 2650 is the line in the sand.  If the market is going to find bottom in the near term, we want to see the S&P stabilizes and climbs above 2650.  Staying below that level heralds more losses.